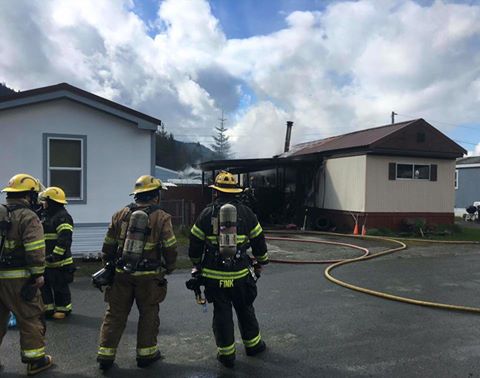 CCFR Assistant Chief Chad Cameron says crews found the mobile home on fire upon arrival and the occupants were not injured.

Fire Marshal Daniel Jager says the home is considered a total loss. He says investigation determined the cause to be unintentional, explaining that the wood stove was the heat source responsible for the fire, as a hot ember or spark ignited combustible materials within close proximity of the wood stove. The home was insured.

The Red Cross responded and is assisting the occupants of the home.

Capital City Fire and Rescue has responded to Thunder Mountain Mobile Home Park for a structure fire at Space 22. The mobile home is considered a total loss.

According to CCFR's Facebook, Red Cross volunteers and staff are working with 2 residents who have been displaced, providing immediate needs of food, clothing, blankets and supporting the residents with lodging. CCFR is happy to report the home had working smoke alarms.

CCFR says if you live in the area and need a working smoke alarm, please contact Andrew.Bogar@RedCross.org to sign up for the next Home Fire Campaign FREE Smoke Alarms Install Day or set up an appointment.