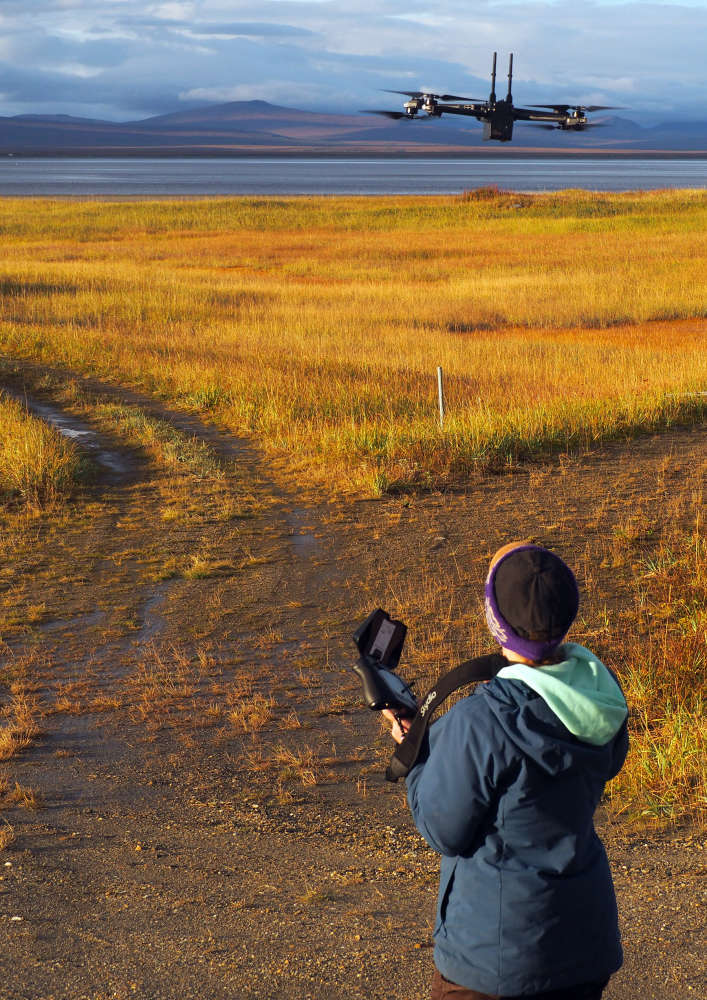 Katie Daniels, a resident of Bethel, flies a drone during a training exercise in Nome in August. (Photo by Mike DeLue via UAF.)

Over the next few days to weeks, the team will work alongside the Coast Guard’s Marine Safety Task Force as they assess infrastructure damage at as many as 20 coastal communities in Alaska’s Bering Strait.

Typhoon Merbok damaged hundreds of miles of coastline on Sept. 17, from north of Bristol Bay to just beyond the Bering Strait. In places like Nome, the ocean rose 10.5 feet above the low-tide line, the highest in nearly half a century.

UAF’s team will use drones to evaluate the integrity of oil-bearing infrastructure and perform community assessments for other hazardous spills that may have occurred as a result of the storm.

“As the Coast Guard performs boots-on-the-ground assessments, we’re their eyes in the sky by providing 2D and 3D mapping,” said Mike DeLue, a drone pilot and science communicator at the UAF International Arctic Research Center.

DeLue and project lead Jessica Garron, the deputy director of the Alaska Climate Adaptation Science Center at IARC, will be the first two UAF drone pilots called to the impacted communities.

First stop is Unalakleet. Even before Typhoon Merbok, DeLue and Garron were working with John Henry, deputy director of the Native Village of Unalakleet, to build drone capacity in rural Alaska. Through that work, three Unalakleet drone pilots have been successfully trained and equipped to conduct infrastructure assessments, flood mapping, environmental monitoring and coastal erosion mapping.

Both the UAF team and rural pilots have been preparing for situations like Typhoon Merbok. Just last month, several team members participated in an oil spill research exercise at Poker Flat Research Range, while other team members tested operations in Nome.

Drone data gathered by DeLue, Garron and their team will be shared through the State of Alaska Open Data Geoportal, making it available to emergency operations within numerous state and federal agencies.