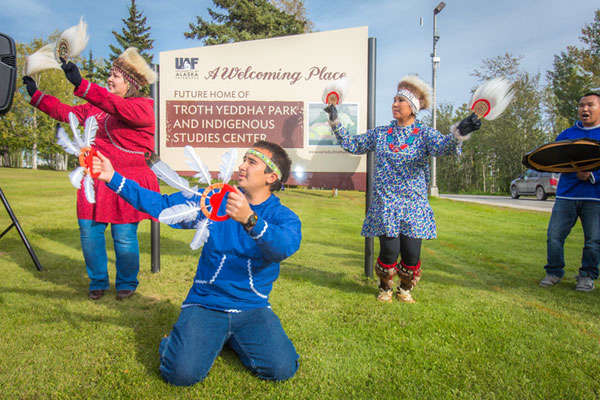 The Troth Yeddha’ Indigenous Studies Center will serve as a central Alaska Native gathering place with classes, services and activities.

Fairbanks, Alaska (KINY) - The University of Alaska Board of Regents on Friday unanimously voted for formal project approval for the Troth Yeddha’ Indigenous Studies Center and Park.

The regents’ approval of the $40 million project, which is slated for construction on the University of Alaska Fairbanks Troth Yeddha’ Campus in Fairbanks, means UAF can proceed with fundraising and schematic design.

UAF has already raised $2.7 million from private donors, which will fund the initial design of the center.

Charlene Stern, UAF’s vice chancellor for rural, community, and Native education said the project has the potential to revolutionize the way students experience the university.

“By creating a space for the perpetuation of Indigenous knowledge and cultures, this one-of-a-kind facility will solidify the University of Alaska’s position on the global map for its excellence in research and high-quality academic programs that meaningfully engage Indigenous peoples and places,” Stern said.

When complete, the center will serve as the administrative hub for UAF’s College of Rural and Community Development, which includes the Alaska Native Language Center, the Department of Alaska Native Studies and Rural Development, and the Center for Cross-Cultural Studies, among other programs.