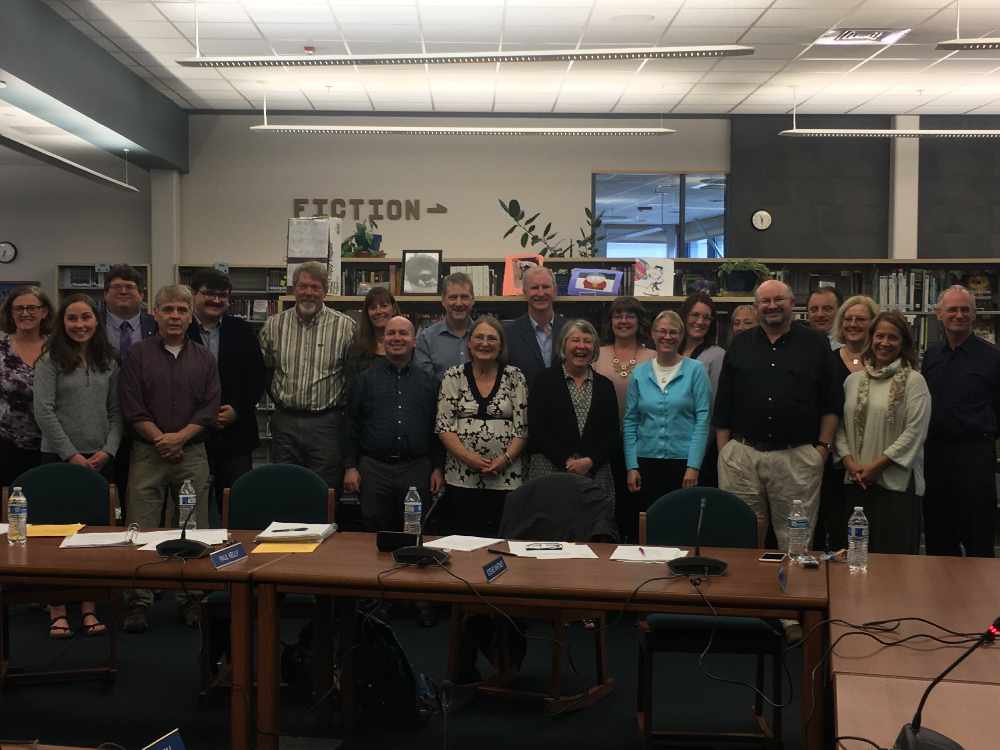 Juneau, Alaska (KINY) - The Board of Education honored several employees who retire this year and made some administrative appointments at their regular monthly meeting tonight.

The Board approved the appointment of Timothy Bauer as the new Director of Human Resources, named Joanna Hinderberger as Principal at Mendenhall River and appointed two interim principals D. Elizabeth Pisel-Davis at Riverbend Elementary and Molly Box at Harborview Elementary.

A number of employees were honored upon their retirement, Tom McKenna, Principal at Harborview Elementary, Ann Stokes, special education teacher at Gastineau Elementary for 21 years, Benjamin Kriegmont, an elementary teacher at Gastineau Elementary, and Joann Jones of Auke Bay Elementary who started teaching in 1974.  She has taught at Auke Bay Elementary for most of the past 28 years.   Also honored were Tonja Moser, English teacher at Juneau-Douglas High, Carolyn Fox, who served the district library system since 2002 at Mendenhall River Community School,  Amy Jo Meiners, a former Alaska teacher of the year in 2016, who has worked at Auke Bay Elementary since 1989,  Shanna Galluzzo, history teacher at JDHS, Anita Evans, who served 22 years many at Riverbend Elementary, Candy Held who worked at Floyd Dryden Middle School and Auke Bay Elementary in the lunchroom program, and Lesslie Knight business education and AVID teacher.   She also coached various athletic teams for close to 20 years.  Each retiree was given a free pass for life to all school events.  They also received a cutting board made by Thunder Mountain woodworking students.

The Board also honored Kathryn Goodell who retires from the school district after 35 years of service as well as science teacher Jonathan Smith.  They also honored Darryl Smith who retires as Director of Human Resources.  Steve Squires retired after 22 years as the automotive teacher at JDHS.

The Board also approved a capital projects list for the 2020 fiscal year.  The budget totals $1 million.  This includes maintenance and deferred maintenance.

The Board also considered a three-year contract with the Juneau Education Support Staff. The contract requires two public hearings.  They could adopt the contract at the next meeting.  The agreement calls for a small salary hike and $25 increases per month in health insurance contributions in each of the next three years. The union approved the contract unanimously and praised the district for the professional way they handled negotiations

The Juneau team won the state title in the Battle of the Books competition.  26 districts competed in the contest this year.  They were able to answer 96 questions during the contest.    The event is put on by the Alaska Association of School Librarians.  The coach was Sheila Degener

Students at Juneau-Douglas High School won the Alaska Academic Decathlon.  The coach was Karina Reyes. The students studied about the 1960s.

The District accepted a donation of $37,400 in tools and supplies from Sealaska Heritage Institute for the Northwest Coast Arts class at JDHS and Thunder Mountain High.

Superintendent Dr. Bridget Weiss said the district continues to work on security issues and door locks.  She said a number of locks have been upgraded.  The CBJ Assembly approved the school operating budget for this year.  The local expense will be $27.88 million.  She said two students Hannah Harvey and Alex Wehe of Thunder Mountain High school have been named National Merit Scholarship finalists.