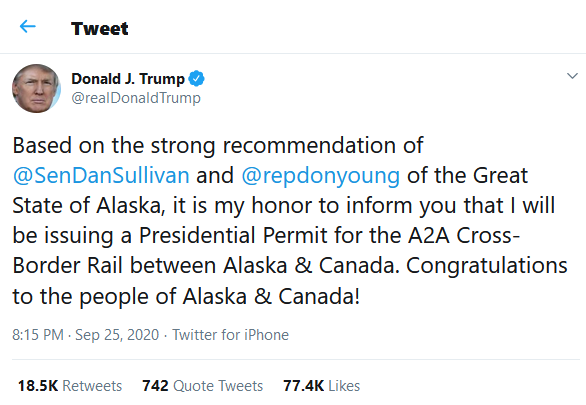 Washington, DC (KINY) - President Donald Trump has stated he will issue a permit for an Alaska to Alberta Cross-Border Rail line between the U.S. and Canada.

The president made the announcement via Twitter on Friday.

The president Tweeted, "Based on the strong recommendation of Sen. Dan Sullivan and Rep. Don Young of the Great State of Alaska, it is my honor to inform you that I will be issuing a Presidential Permit for the A2A Cross-Border Rail between Alaska & Canada. Congratulations to the people of Alaska & Canada!"

On Saturday, Gov. Mike Dunleavy praised the move by Trump.

"A rail link with Canada and the rest of the country has been a dream for many generations and this announcement is a major milestone in seeing that dream become a reality," Gov. Dunleavy said. "Funded by private investment this rail link will be a game-changer for Alaska. It will reduce the cost of goods and services to Alaska and make southcentral Alaska become an additional port to the Pacific and the world for provinces like Alberta and the Midwestern states. This is another example of President Trump doing what is best for Alaska."

Under the terms, the two railroad companies will cooperate in applying to the Alaska Department of Natural Resources for a right-of-way guaranteed under state law for a rail connection to Canada.

In addition, the two firms will develop a joint operating plan which will specify not only the new track needed to connect Alaska’s rail to Canada, but will also identify work needed to upgrade existing rail facilities, bridges, and track on the Alaska Railroad’s 512-mile mainline.

The project is estimated at $17 billion.

The A2A Development Corporation is privately owned and funded by its Chairman and Founder, Sean McCoshen.

According to the A2A website, McCoshen has spent over $100 million on the project.

"As the project progresses, it is anticipated that A2A Rail will seek investment from infrastructure funds, Sovereign Wealth groups, and private investors," the website states. "Additionally, A2A Rail is looking into several government-issued grants and loan guarantees in both the U.S. and Canada to assist in providing the risk capital needed to develop the railway."

Former Lt. Governor Mead Treadwell is named as the Alaska vice-chair of A2A on the company's website. He is also the former president of PT Capital in Anchorage.

According to Treadwell, during a March 2019 Meet & Brief Luncheon speech at the World Trade Center Alaska, PT Capital had previously been involved in the A2A project.

"The owners of [A2A] Railway are investors in PT Capital and employed us to work on strategic issues," Treadwell said. "When I left PT Capital I brought this client with me."

If built, the railway would move through Alaska, into Yukon, the Northwest Territories, and into Alberta. It is approximately 1,600 miles long, with roughly 200 miles of new track in Alaska, and the remaining 1,400 miles in western and northern Canada.

According to Anchorage Rep. Chuck Kopp, the move by Trump is part of a bigger picture, which involves the ARRC moving to enforce quiet title on a number of private landowners' easements to access their property.

Rep. Kopp, and other lawmakers and private parties, are fighting a lawsuit filed by the Alaska Railroad Corporation in the matter.

In response to the ARRC filing of a lawsuit in federal court on Monday seeking control over privately owned lands in a South Anchorage neighborhood, Rep. Kopp urged Acting Attorney General Ed Sniffen to intervene on behalf of the State of Alaska to defend private property rights and curtail railroad overreach.

“This action by the Railroad is a direct attack against the private property rights that underpin our Alaskan way of life,” said Rep. Kopp. “It amounts to nothing short of a land grab and gross overreach by a public corporation—something I will always stand against. I urge the Governor and the Attorney General to do the same."

According to Rep. Kopp, despite not having clear authority to do so, the ARRC has for years asserted the exclusive right to use much of the 200-foot railroad right-of-way that runs approximately 500 miles from Seward to Fairbanks.

The land overlaps hundreds of parcels of private, municipal, and state land. Rep. Kopp said the corporation is going as far as to charge landowners for access to their own properties.

Rep. Kopp said, in 2018, the Alaska State Legislature, with the passage of HB 119, clarified in law that the ARRC does not have sole authority over these rights-of-ways and that it must recognize that underlying landowners retain certain rights to their own land.

The letter requested the Governor urge the Alaska Railroad Corporation to reform their right-of-way use policy to allow for fair and equitable treatment of property owners and utilities located within railroad easements.