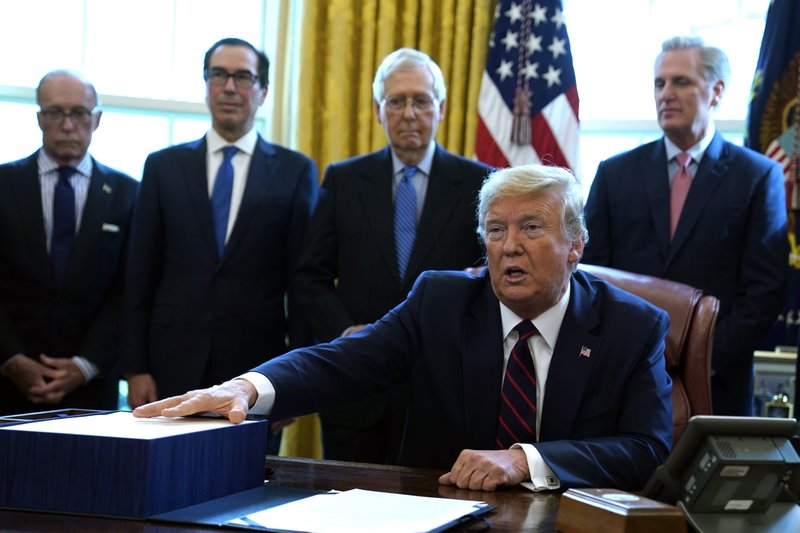 President Donald Trump speaks before he signs the coronavirus stimulus relief package in the Oval Office at the White House, Friday, March 27 in Washington.

The signing came after swift and near-unanimous action by Congress to support businesses, rush resources to overburdened health care providers and help struggling families during the deepening coronavirus epidemic.

Acting with unity and resolve unseen since the 9/11 attacks, Washington moved urgently to stem an economic free-fall caused by widespread restrictions meant to slow the spread of the virus that have shuttered schools, closed businesses and brought American life in many places to a virtual standstill.

“This will deliver urgently needed relief,” Trump said as he signed the bill in the Oval Office, flanked only by Republican lawmakers. He thanked members of both parties for putting Americans “first.”

Earlier Friday, the House gave near-unanimous approval by voice vote after an impassioned session conducted along the social distancing guidelines imposed by the crisis. Many lawmakers sped to Washington to participate — their numbers swelled after a maverick Republican signaled he’d try to force a roll call vote — though dozens of others remained safely in their home districts.

“Today we’ve all acknowledged our nation faces an economic and health emergency of historic proportions,” said House Speaker Nancy Pelosi, D-Calif. She said Americans deserve a full-on government response “to address these threats to their lives and their livelihood and they need it now.”

The $2.2 trillion legislation will speed government payments of $1,200 to most Americans and increase jobless benefits for millions of people thrown out of work. Businesses big and small will get loans, grants, and tax breaks. It will send unprecedented billions to states and local governments, and the nation’s all but overwhelmed health care system.

“This is not a time for cynicism or invective or second-guessing,” said GOP Whip Liz Cheney of Wyoming. “This is a time to remember that we are citizens of the greatest nation on Earth, that we have overcome every challenge we have faced, and we will overcome this one.”

Despite reservations, arch-conservatives joined with progressives like Alexandria Ocasio-Cortez, D-N.Y., to back the bill, which moved quickly through a Congress that’s been battered by partisanship and is itself not immune to the suffering the virus has caused. Reps. Joe Cunningham, D-S.C., and Mike Kelly, R-Pa., announced Friday that they’d tested positive, bringing the number of infected lawmakers to five.