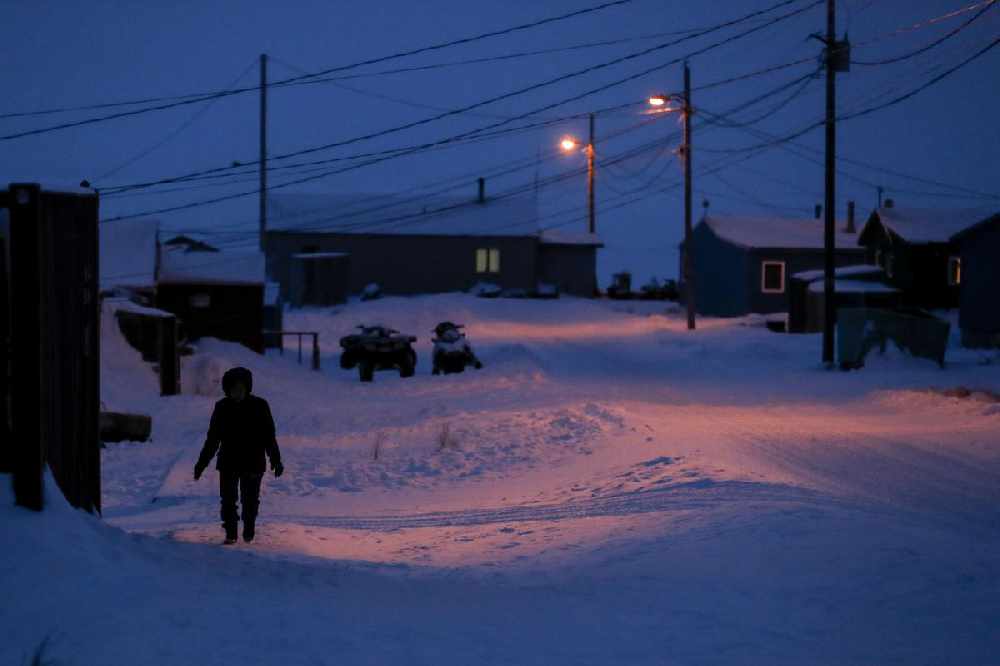 A woman walks before dawn in Toksook Bay, a village on the edge of the Bering Sea. A judge has ruled in favor of tribal nations in their bid to keep Alaska Native corporations from getting a share of $8 billion in aid.

Flagstaff, Ariz. (AP) - Tribes urged the federal government to quickly disburse coronavirus relief funding after a judge handed them an early victory in a case centered on who is eligible for a share of the $8 billion allocated to tribes.

U.S. District Judge Amit Mehta in Washington ruled in favor of the tribes late Monday in their bid to keep Alaska Native corporations from getting any of the money — at least for now. The decision clears the U.S. Treasury Department to send payments to 574 federally recognized tribes to respond to the coronavirus.

At least 18 tribes sued the Treasury Department, alleging that Congress intended the funding to go only to tribal governments. They said the corporations that own most of the Native land in Alaska don't fit within the definition of “Indian Tribe” in the Coronavirus Aid, Relief and Economic Security Act signed into law last month.

Mehta said the tribes easily showed they would suffer irreparable harm unless he limited the funding temporarily to tribal governments while he awaited more argument on the question of eligibility of Alaska Native corporations.

“These are monies that Congress appropriated on an emergency basis to assist tribal governments in providing core public services to battle a pandemic that is ravaging the nation, including in Indian Country," Mehta said.

The U.S. Justice Department, which represented Treasury, declined comment Tuesday. The Treasury Department did not respond to requests for comment.

Justice Department attorney Jason Lynch had argued that the Treasury Department's decision to include Alaska Native corporations wasn't subject to judicial review because the funding is for a public health emergency. Mehta rejected the argument.

The Treasury Department has said it could start sending payments to tribes Tuesday — two days past the deadline in the coronavirus relief bill. But it has not said how it would determine who gets what.

Congress set aside $8 billion for tribes in the $2.2 trillion bill. Mehta did not order the Treasury Department to disburse all the money to tribal governments.

Harry Pickernell Sr., chairman of the Confederated Tribes of the Chehalis Reservation in Washington state, said he was pleased with the judge's decision.

“This ruling will help tribal governments to lead in the aid and recovery of their people,” he said in a statement.

The tribes that have sued are in Alaska, Arizona, California, Maine, New Mexico, South Dakota, Utah and Washington state.

The corporations, which are not parties to the lawsuit, have said they support Alaska Natives economically, socially and culturally.

“This will mean a delay in necessary resources and economic assistance for Alaska Native people in our communities and our state,” the groups said. “However, Alaska Native people have a history of resilience and strength. Together we will prevent the spread of COVID-19, care for those who get sick, and repair our economies.”

For most people, the coronavirus causes mild or moderate symptoms, such as fever and cough. For some, especially older adults and people with existing health problems, it can cause more severe illness and death. The vast majority of people recover.