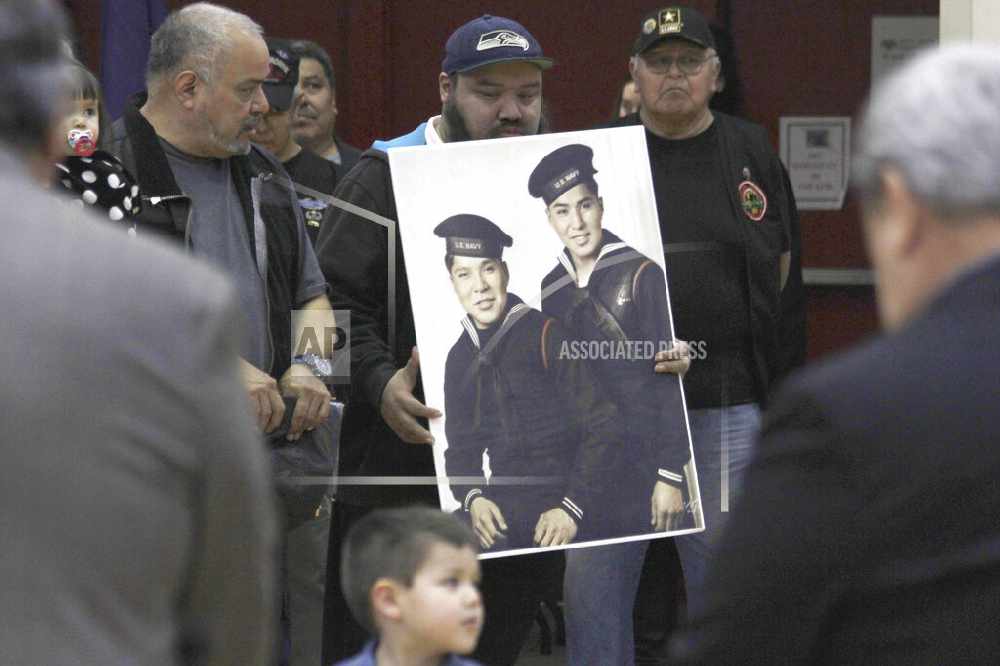 In this Monday, March 18, 2019 photo, family members of brothers Mark Jacobs Jr. and Harvey Jacobs observe a moment of silence during a ceremony honoring Tlingit code talkers in Juneau (Photo from AP)

ANCHORAGE, Alaska (AP) — Army veteran Richard Bean Sr. took his wartime secret to the grave, dying a hero without anyone knowing about it for decades.

Now, Bean and four other long-deceased Alaska Natives are being hailed in their home state this month for their lifesaving efforts as servicemen.

During World War II, they made good use of the Tlingit language they were forbidden to speak as schoolchildren in their southeast Alaska villages. They used their native language to help the military outsmart the Japanese with codes they could not break, as did their more well-known peers, the Navajo Code Talkers.

It's a long way from the days of the men's youth, when their language was suppressed by missionaries and teachers trying to "civilize" them, said Rosita Worl, president of the Sealaska Heritage Institute, a Juneau nonprofit aimed at preserving and enhancing the cultures of southeast Alaska's Tlingit, Haida and Tsimshian tribes. Punishments for students who spoke their language included having their mouths washed out with soap and their hands struck with rulers, according to Worl.

Until recent years, however, the men's contributions were unknown. The U.S. military for a time kept the unbroken codes secret in case they were needed in future wars.

"Their orders were not to talk about it," said Ozzie Sheakley, an Army veteran and Tlingit leader. "They took those orders seriously."

Even the closest relatives had no clue about the five men, all from small towns on Alaska's Panhandle: soldiers Richard Bean Sr. of Hoonah and Robert "Jeff" David Sr. of Haines; Sitka brothers and Navy men Mark Jacobs Jr. and Harvey Jacobs; and George Lewis Jr., who was also from Sitka and is believed to have served in the Army.

Richard Bean's wife died before Congress finally posthumously recognized the men in recent years. And his 85-year-old nephew, Ron Williams, never knew either, even though the two were extremely close.

Williams said there was only one hint. His uncle told him a platoon leader overheard him speaking Tlingit with fellow Code Talker Jeff David while the two were in the Philippines campaign together, in the same company but different platoons. The Army official asked how the men would like to handle communications, then gave each a walkie-talkie. But that was the end of Bean's story, and Williams never pushed for more, sensing his uncle didn't want to talk about it. Richard Bean died in 1985.

"Even the guys that knew him all his life, you know, they didn't know what he did either because he never said anything about it," Williams said.

David never said anything about it to his son, Jeff David Jr., either.

"He just said he was in special services, and that was as far as he put it," the son said. "And he was stationed in the Philippines for a while."

The military declassified the Navajo Code Talker program in 1968. But it would be decades before recognition came to the Tlingit servicemen, after the passage of the Code Talkers Recognition Act of 2008.

Sheakley, commander of the Southeast Alaska Native Veterans, received a call after that from Department of Defense officials. They told him the five Alaskans had been identified as Code Talkers from the Tlingit tribe, along with others from 32 Lower-48 tribes. Soon they would get the recognition long afforded to the Navajos, who made up the largest group of WWII Code Talkers.

In 2013, Congress recognized the Code Talkers from 33 tribes, including the Tlingit men, who were posthumously awarded silver medals. Sheakley also received a Congressional Gold Medal on behalf of the entire Tlingit tribe.

State lawmakers agreed when Thomas pushed for the idea along with the Sealaska Heritage Institute. Earlier this month, legislators passed a formal citation honoring the Tlingit Code Talkers. State flags were flown at half-staff and later presented to the men's families.

The now-celebrated role the men played in history was a stunning discovery for the family of George Lewis Jr.

His son, Ray Lewis, was born after the war and never even knew his father was in the military. There are no military records in the family to even indicate what branch the elder Lewis served in, he said.

It was a great honor to learn his father was part of such important work.

"I'm very proud of it," Ray Lewis said. "My father was instrumental in saving a lot of lives out there."