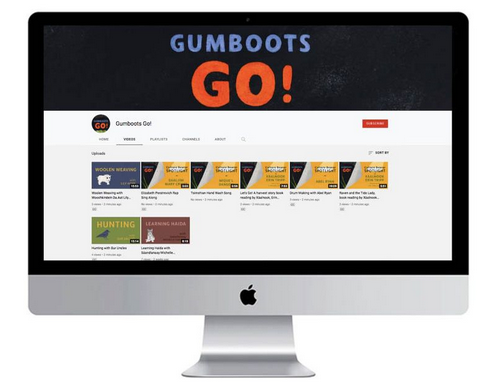 The videos highlight the Tlingit, Haida and Tsmishian cultures in Southeast Alaska.

The goal is to create engaging content for children that connects them with their Indigenous heritage.

"Really focusing on the youth, on starting as an early age getting them kind of immersed in culture," said Cultural Heritage Manager, Stephen Qacung Blanchett. "So that's kind of how Gumboots Go started, thinking of a cute name that would be kind of catchy for the kid, so it was like, the whole thought and the idea of it is to have it as a kind of a channel, almost like a television channel that Tlingit & Haida runs, and we're putting out these series of videos with different kinds of content."

The program is the product of a community collaboration with Cedar Group under Tlingit & Haida’s Child Care and Development Block Grant.

Blanchett says the videos cover a range of indigenous practices.

"So we have this content that that was generated by different folks that we identified, and so, there's a whole host so we have formline design, you name it," he said. "There's some videos of like making, making syrup, fireweed syrup, so we're just really trying to create a series of videos that would just connect our kids and families to these cultural practices. It's a lot of fun. It's really it really is."

“When we learn our language, it can heal and make our hearts bigger and it can make our minds stronger. Then we can share it with our friends and family. Then our language will survive; it won’t go anywhere because we are all sharing it together,” Sáandlanaay tells viewers.

So far, there are eight videos on the Gumboots Go! YouTube channel. The series includes several more extended pieces, like Lily’s weaving and Sáandlanaay’s song, as well as one with Tsimshian artist Abel Ryan making a drum and another with a group of uncles hunting for deer. Shorter Culture Bearer Spotlights feature a Tsimshian handwashing song, information about Elizabeth Peratrovich and stories by local authors.