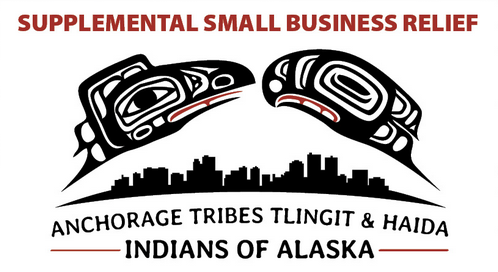 The tribe allocated $1 million in American Rescue Plan Act funding for the relief program. The new program was developed in partnership with the Anchorage Tlingit & Haida Community Council, who provided recommendations on how best to prioritize and provide meaningful local response to the needs of tribal citizens registered to Anchorage who have experienced economic hardship as a result of the COVID-19 pandemic.

“Small businesses are the backbone of our economy and supporting them through these difficult times has been one of the core missions of Tlingit & Haida,” said President Richard Chalyee Éesh Peterson.

This new wave of funding is specific to supporting tribal citizen-owned small businesses who are on Tlingit & Haida’s official voting list for the community of Anchorage and at least 50% owner of a small business. Tribal citizens can apply to receive reimbursement up to $5,000 for eligible business expenses or costs incurred due to the COVID-19 pandemic. The receipts submitted for relief assistance must be different from those submitted under Tlingit & Haida's general Rescue Small Business Relief program.

"Our tribal citizens that own small business are contributing to the economy of our community and working hard to provide for their families," stated Tlingit & Haida 4th Vice President Tasha Hotch. "I listened to public testimony from small business owners all over Anchorage about the inequity of the programs available to help support our small businesses during this challenging time. Our Community Council was very happy to be able to provide some support to these hard-working citizens to keep their business thriving."

The program will run through June 17, 2022 or until all funds have been expended. The period for reimbursable expenses is January 1 - December 30, 2022.