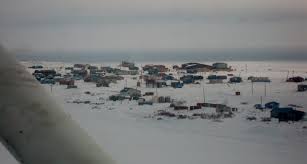 EEK, Alaska (AP) — The small Alaska community of Eek now has running water and toilets that flush thanks to a community development project that is already delivering public health improvement results, officials said.

Eek, which has 474 residents, worked with the Alaska Native Tribal Health Consortium to install a new plumbing system using both federal and state funds, KYUK-AM reported.

Eek is in Alaska's Yukon-Kuskokwim Delta, where nearly 1,700 — or 40 percent — of the homes outside the city of Bethel do not have running water, KYUK reported.

Eek residents previously paid 25 cents for 5 gallons (19 liters) of treated water from a community water distribution point, according to the station, which said most inhabitants also collected rainwater in summer and river ice in winter.

Pneumonia is more common in communities without running water, but when running water and sewer are introduced, infection rates drop, according to the station.

In one study of rural Alaskan communities, clinic visits for respiratory infections declined by 16 percent, skin infections by 20 percent, and gastrointestinal infections by 38 percent.

Eek resident Seth Heakin helped install the water system and said his five children now get sick less than they did when the family's home did not have running water.

"It's just the everyday hand-washing and not reusing the water is the biggest thing for us," he said.