The story of moon rocks and Alaska 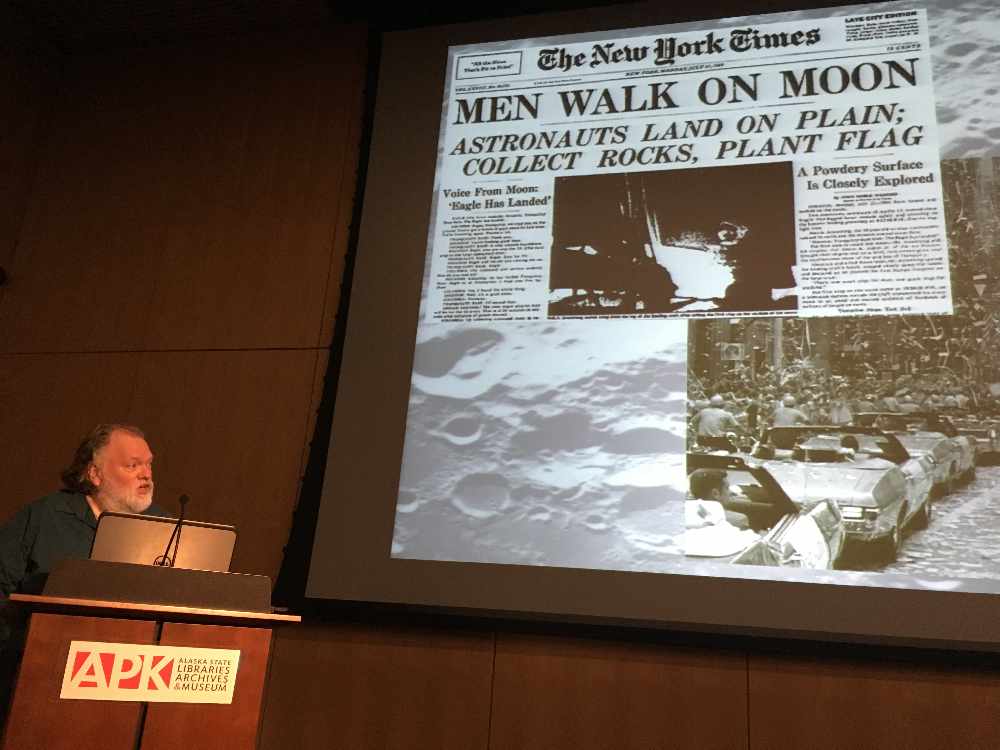 Juneau, Alaska (KINY) - A gift to Alaska from then President Richard Nixon turned into a tale of a fire, disappearing rocks, the FBI and an old photo.

The case for Tranquility base: Apollo 11 and Alaska's Missing Moon Rocks was presented by the APK Museum Curator of Collections, Steve Henrikson Friday.

"50 years ago tonight I was glued to the television watching the grainy images from space, it has just stuck with me over the years," he added.

The event was one way for the Alaska State Museum to mark the anniversary.  Tomorrow they have a full day of events planned.

The story of the disappearance confirms the statement that fact is always stranger than fiction.

In 1969 the moon fragments were encased in a Lucite sphere and mounted to a wooden podium.  The gift also included a small Alaskan flag that had flown to the moon with Apollo 11.

Tomorrow marks the 50th anniversary of the historic landing.  The moon rock display is available in Juneau in the state museum.

The story speaks about human beings and the fascination they have for exploration and discovery, Henrikson added.

Soon after President Nixon presented the gift, the lunar sample display went on a tour of the state.  One of the stops in 1970 was a science fair in Glennallen.  It was well protected as the National Guard defended the gift.  It stayed in a house overnight and the residents Marie White and her brother Gene had a chance to hold the rocks and have their photo taken.

The rocks were eventually housed at the Transportation Museum in Anchorage.  A fire ripped through the facility in 1973 and destroyed nearly everything inside.  What survived was returned to the owners.  Henrikson said some fuel had been dripping from an airplane in the museum.

A couple of museum employees found the rocks intact inside a glass display case as they searched through the rubble.  A 17-year-old helping clean up took the rock display home for safekeeping.

To this day there are conspiracy theories that the moon landing was faked.  "Man has walked on the moon and Apollo 11 was the first time we did it," Henrikson said.

The astronauts left between 80 to 90 artifacts and equipment on the moon including a three by five foot American Flag and the Apollo 11 Lunar Module descent stage.

Rocks re-emerge in a court case

40 years later the now middle-aged man reappeared through an attorney in Seattle when he filed a lawsuit to seek the quiet title of the rocks and claim ownership.  He claimed the rocks were somewhere overseas and the only way for Alaska to get them back was to pay him.

The state had to make sure they were real and authentic.  Tests at the time would not allow the rocks to be tested without being damaged.

The FBI used photograph comparison to authenticate the photo of the rocks taken at the home of Marie White, years before.

Experts concurred after the analysis.

The man, Arthur Anderson, was persuaded to surrender the moon rocks soon afterward.

Alaska isn't the only state that has problems with moon rocks.  11 samples are known to be missing in states like Massachusetts, Texas, and New York

47.7 pounds of moon rocks were collected by the astronauts and returned to earth.  There was some geology training for astronauts in Alaska in Katmai National Park in 1965.  The experts at the time thought the surfaces of Alaska and the moon could be similar.

The Alaska display was first presented to Gov. Keith Miller and his wife in December, 1969.

"It was a big mystery what happened to the rocks after the fire.  Anderson was the former stepson of the curator of the museum at the time of the disappearance."

The US Homeland Security people were able to locate the stolen government property the moon rocks, in South Korea.  Anderson is an avid fisherman and might have transported the rocks during fishing expeditions.

"It is very apparent that you should never try to sell moon rocks owned by the U.S. government because they get very mad about it," Henrikson added.

A Judge later ruled in favor of Alaska and ordered the rocks be returned home to Alaska.  It was delivered on March 8, 2012.

Henrikson was chosen to retrieve the rocks from the Johnson Space Center in Houston, Texas and return them to the State Museum.

The return drew national media attention.  Later Henrikson got to meet Aldrin on a visit to Anchorage.

"Even 50 years after the fact it is still a story that captivates people.  It is so remarkable all the things that came together, the technology, the engineering the physics and the change for failure was astronomical."

At some level it united many countries and culture together even though it had its roots in the Cold War, Henrikson added.

The APK will host a film of the moon landing at 1:30 pm on Saturday.  Local geologist Cathy Connor will give a presentation about the moon at 2 pm.

The Marie Drake Planetarium will hold documentaries on Apollo 11 Saturday at 4 pm and 9 pm.