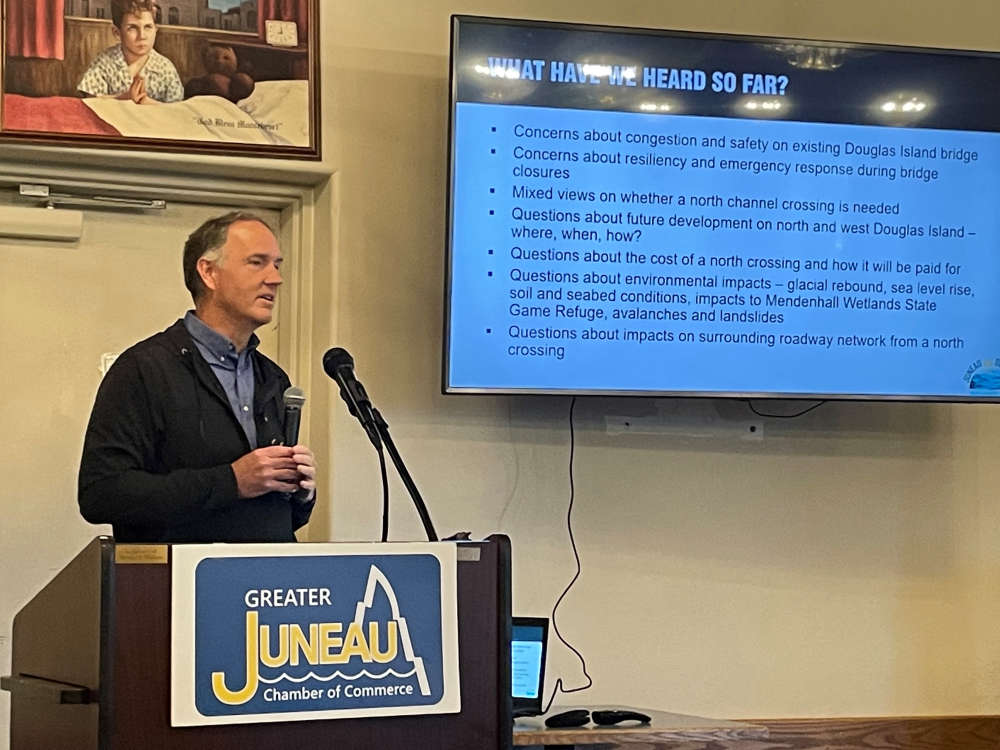 Noble presenting before the Juneau Chamber.

Juneau, Alaska (KINY) - A study on a second crossing to Douglas is underway and the project planner from DOWL Engineering said they are working through the PEL process as well as conducting public outreach.

The project is being done in a partnership between the City and Borough of Juneau, the Alaska Department of Transportation, and DOWL. They are undergoing a Planning and Environmental Linkages study, or a PEL study, which will evaluate existing conditions and issues.

"You guys have been looking at a crossing here since the 80s, and in fact, we have with we have some documents that show even back as far back as the 60s that a second crossing was being evaluated, and so it's it has been discussed for a long time," said Transportation Practice Area Leader for DOWL, Steve Noble, who presented the work going into the crossings PEL study to the Juneau chamber last week.

Noble said the PEL process enables them to flesh out issues during the current planning stage. He said this would allow them to step into the environmental and design process with much more confidence that the project is going to move forward without any flaws that would force them to go back and start from the beginning.

Noble explained that in a PEL study, they are starting off with a blank slate and have public input provide the basis of their proposed alternatives.

Part of the process is working up a Purpose and Needs statement, which provides a basis for the development and evaluation of project alternatives. Current themes emerging include; Economic Impact, Emergency Response, Travel Time and Congestion, Developable Land, Redundancy, Population, Utilities, and the need for Active Transportation Facilities to access Recreation.

"From a developable land perspective, a lot of the existing land that's remaining to be developed is either a wetland, or it's on steep terrain, or it's it's difficult to develop, and that contributes to high development costs for new development whether it's residential or commercial," he said "Douglas is seen as a potential opportunity, with more appealing more cost-effective terrain, more cost effective soil conditions for developable land and the travel time, and the availability of land from a from a land ownership perspective and the land use from a commercially available perspective.

Noble said that by the winter of this year alternatives will be proposed and that by next year the PEL process will be complete. In the meantime, he said they want folks to reach out to them for their input. Comments can be submitted to JDNorthCrossing.com.

"I think they're off to a really good start. It looks like they've got a good team. I just hope that it doesn't get bogged down like these things always do and turn into just another study," Dave Hanna said.

"I'm very happy that this back on the agenda of our city and we're thinking about state city working together on this. When I was on the assembly we did read up again as another 'we should give it another shot.' So I'm very pleased that it's happening. I hope that we can accomplish all the types of areas that were problems last time so that our public, the majority of our public, will be supportive and we can get it built. "I think I'm looking forward to this process."