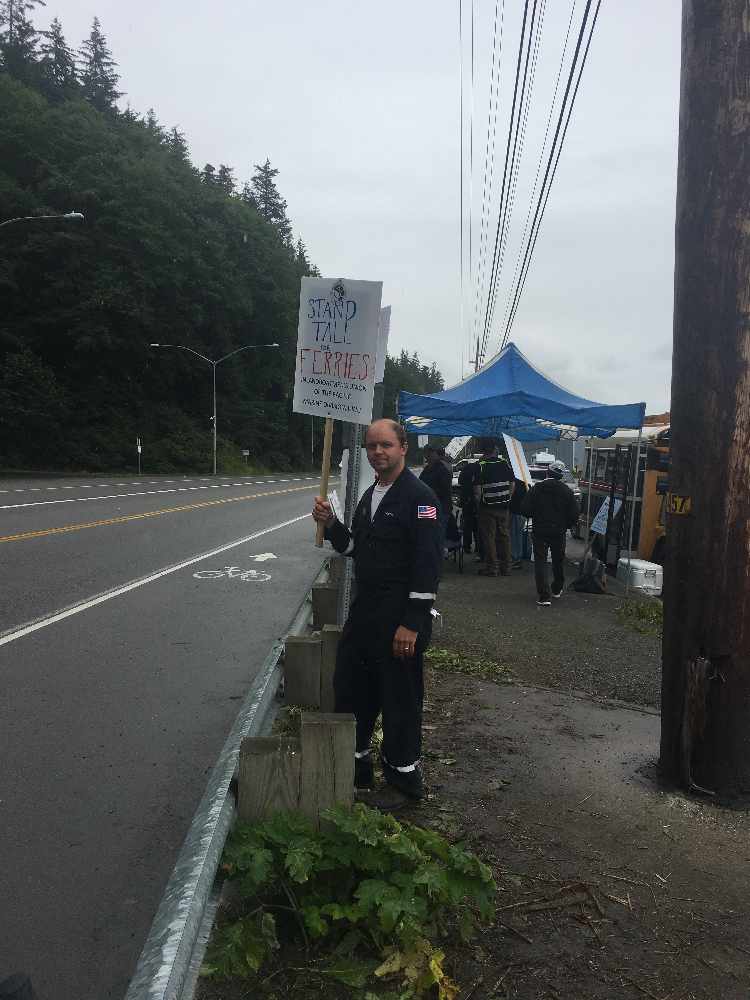 A striking IBU worker on the picket line in Juneau.

Juneau, Alaska (AP) - The first strike by Alaska ferry workers in over 40 years has snarled travel plans for thousands of people during the busy tourist and fishing season, leaving some stranded and catching the attention of a Democratic presidential candidate.

Members of the Inlandboatmen's Union of the Pacific went on strike Wednesday after failing to reach an agreement with the state on contract terms, bringing Alaska's ferry system to a halt.

State transportation Commissioner John MacKinnon said the department had canceled reservations for more than 3,000 travelers as of early Friday and refunded more than $1 million in fares.

About 225 passengers and about 90 vehicles had been stranded in ports that aren't their final destination, he said. He noted this is a peak travel time and that other options, including barges for vehicles and planes, have limited space.

A tweet Friday from former Vice President Joe Biden, who is seeking the Democratic nomination for president, calls on Republican Gov. Mike Dunleavy to immediately restore full funding to the system, which lawmakers this year cut by more than $40 million. The cut was seen by some as a compromise with the Dunleavy administration, which initially proposed a deeper cut and has said it wants to find ways to reduce the cost of the system to the state.

State funds and fares are key components of the system's budget, and July, August and September are important revenue months, MacKinnon said.

The ferries, an important transportation link for many small communities not connected to Alaska's road system, run along 3,500 miles of coast from Bellingham, Washington, through southeast Alaska and the Gulf of Alaska to the Aleutian island chain. Some communities are only accessible by air or water, and even those options can be limited.

Residents of some southeast Alaska communities put their vehicles on a ferry to Juneau, a larger city of around 30,000 people, so they can load up on supplies at places like Costco. Some fish processors use ferries to transport refrigerator vans, MacKinnon said.

The last strike by ferry workers occurred in 1977 and lasted 20 days, said Meadow Bailey, communications director for the transportation department.

By email, she said the department is letting stranded passengers in Ketchikan with no other lodging options stay on board an idled ferry that had been bound for Bellingham until they can make alternate arrangements. It wasn't immediately clear how many travelers had accepted that offer, which includes access to beds and showers.

Earlier this week, MacKinnon questioned the timing of the strike, coinciding with the Southeast Alaska State Fair. "We're disappointed that they chose this time to do it," he said. "I think there was probably some calculation behind that."

The union says the dispute goes back nearly three years and cites health care, pay and cuts in ferry service as sticking points. Robb Arnold, a union spokesman, said workers are frustrated by a lack of communication on what the cuts could mean for them.

State Administration Commissioner Kelly Tshibaka has called the strike unlawful and called on the union to meet with the state and a federal mediator.

The state said starting Aug. 1, striking employees will be responsible for paying their health insurance premiums.

Patti Mackey, president and CEO of the Ketchikan Visitors Bureau, called the strike a big deal. Many in her community work on ferries or they know someone who does, Mackey said. Ketchikan gets several thousand visitors a year who come by ferry, some with RVs, she said.

State Sen. Jesse Kiehl, a Juneau Democrat, called the ferries essential infrastructure. He said it's important for the two sides to resume talks and try to reach a resolution.

"There are people stuck and businesses hurting, and there's already economic damage happening," he said. "Anyone who thinks that this is painless and someone else is filling the void has not yet seen the whole picture."