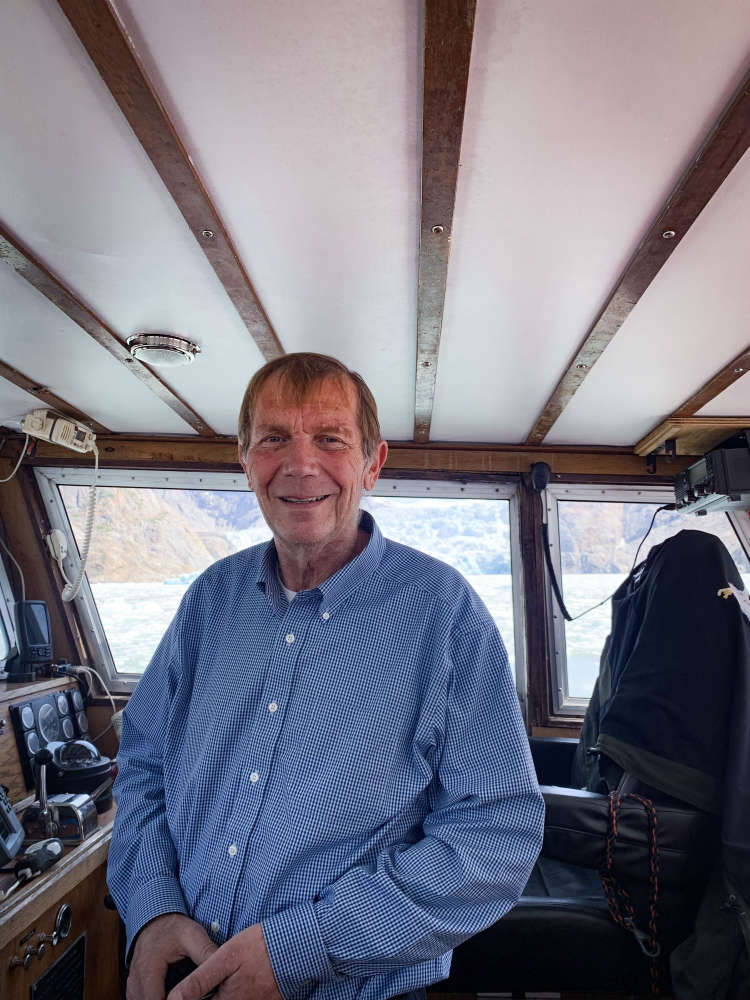 Captain Steve Weber in the bridge of his boat Captain Cook, with South Sawyer Glacier visible out the window.

Juneau, Alaska (KINY) - Captain Steve Weber operates three different boats that are available to take tourists and locals on a trip to Tracy Arm that they won't soon forget.

Weber says South Sawyer Glacier, the tour's destination, is about 70 nautical miles from downtown Juneau, which is 80 statute miles.

The tour departs at 8 am and returns to Juneau at 6 pm.

There's plenty to see on the way there, such as huge waterfalls cascading down mountains, orca and humpback whales, seals and sea lions, and Bald Eagles sitting on icebergs the size of buildings while bears watch from the rocky shoreline. 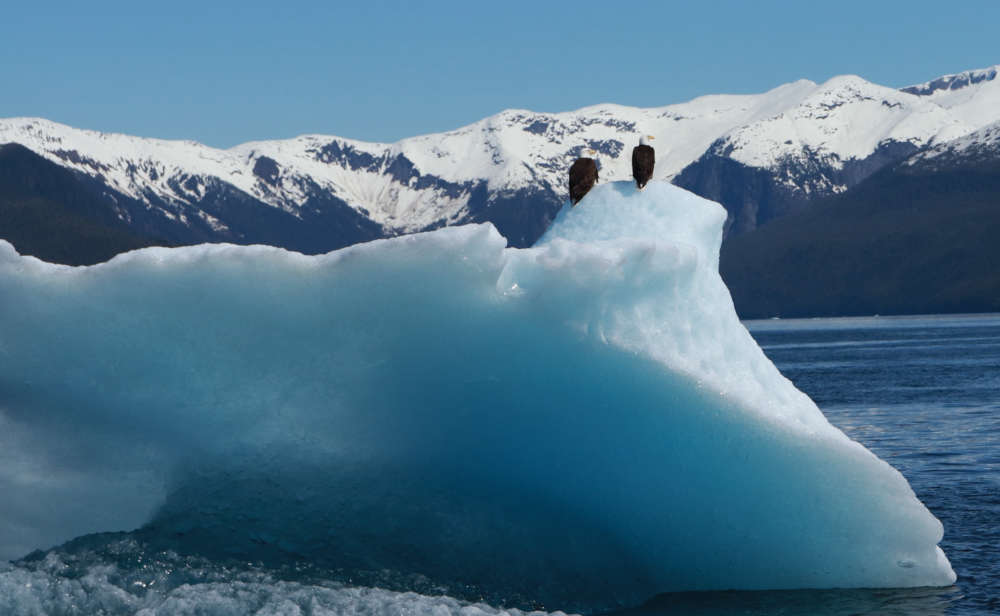 Above: Bald Eagles sit on an iceberg. Below: The view of South Sawyer Glacier with seals among the scattered ice. 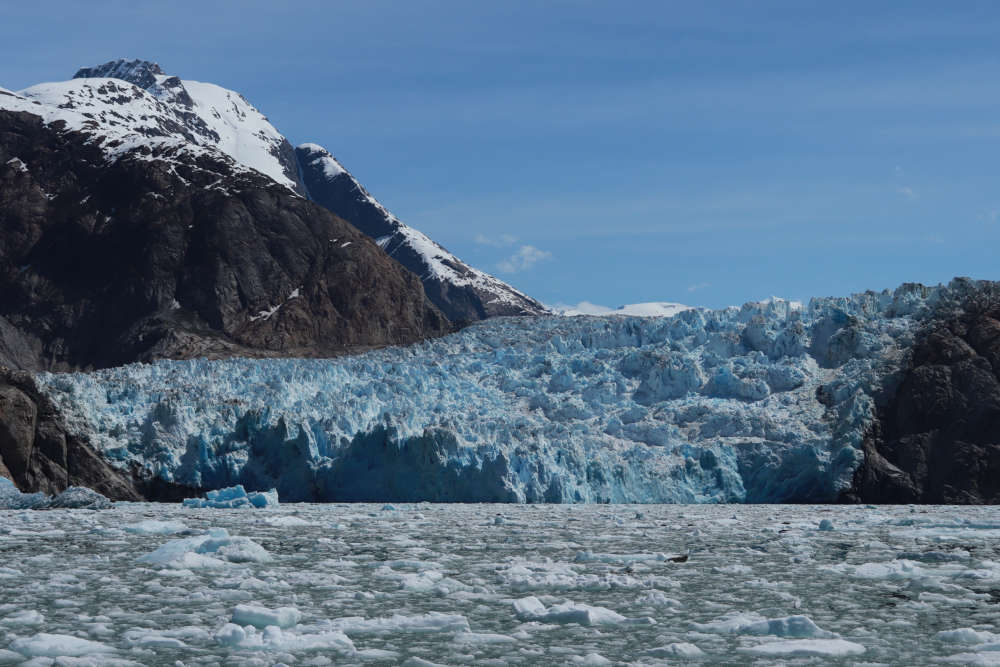 "My favorite part is right here in front of South Sawyer Glacier. But there's so many other bonuses between the mountains and the glaciers up high. We're sitting here looking at one top of a 6,000-foot mountain that's totally covered with fresh snow and must be 5,200 feet of new snow on top of that glacier. And that's a very big glacier that we can see outside. We're at sea level and looking almost straight up to things like that. And that's just part of the whole trip to the wildlife, the rock formations, glaciers, tall mountains, with really deep snow. Harbor seals, they have their pups here and their main pupping times are May and June. We like to get close enough to see them but farther away to where we don't bother them. And we get at times exceptionally good whale watches. As kind of a bonus thing, it's not our main business, but sometimes we get enough to where that's pretty exciting there too. Tracy Arm Fjord has some of the nicest icebergs compared to most anywhere else, the nicest size, eyes, and colors," Weber said.

When at the end of the Fjord looking up at South Sawyer Glacier, which runs 25 miles long, the water is 900 feet deep.

In the springtime it's common for there to be mass chunks of icebergs, sometimes blocking Weber's path.

He says North Sawyer glacier is there as a backup when that occurs.

"Tracy Arm here, this is my 25th year. I did other things with fisheries and so on in the past but Tracy Arm's what really lured me in. It's so beautiful, so incredible. I get to see it every day and I come back every day with the same enthusiasm. It's just that good of a place and an event," Weber said in response to how long he'd been operating. 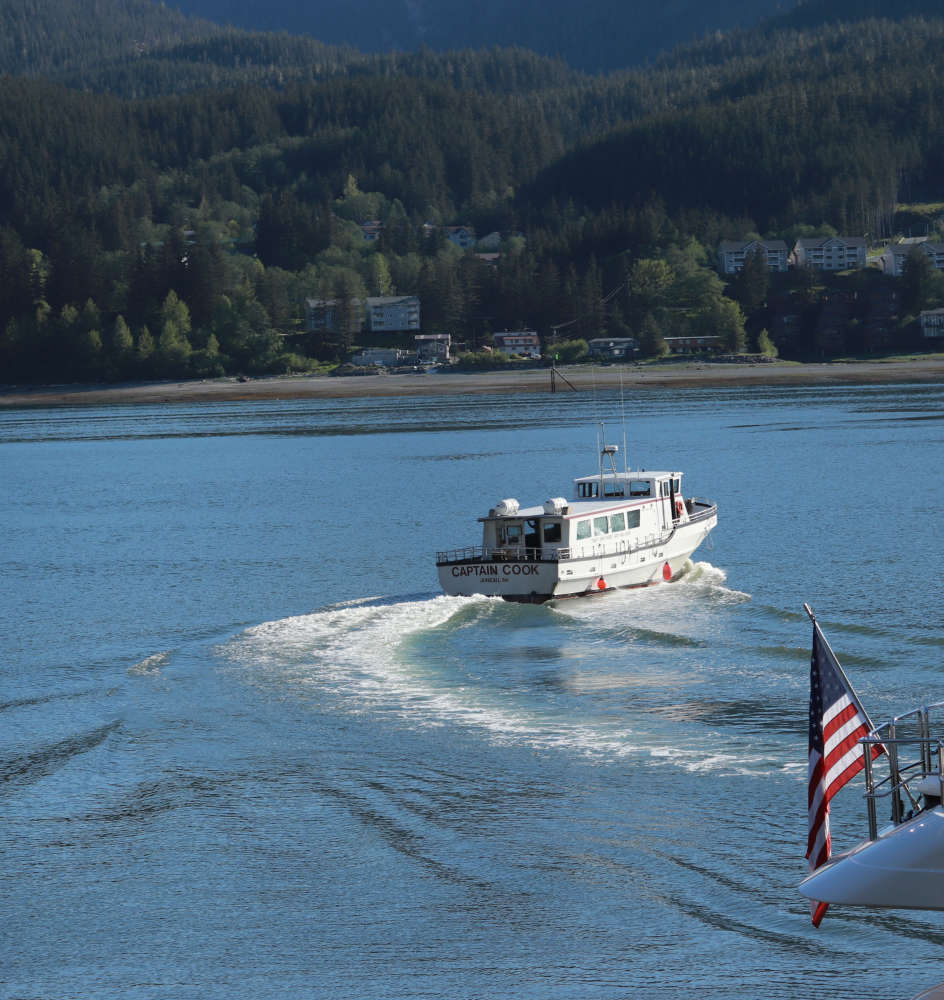 Above: Adventure Bound tours depart through the Gastineau Channel.

Weber also talked about the history of the Fjord's exploration and his boat's namesake.

"We recognize Captain Cook who was one of the great explorers of the world. He made three trips up here into Alaska. He's a British naval captain and his work around the world really stands out. And so we thought we'd commemorate that. He made the best maps and kept the best records," Weber explained.

Adventure Bound tours run the first weekend of May until early September, although Weber says they took a few trips out as early as April this year.

If you'd like to make a reservation, go to https://www.adventureboundalaska.com/.