Statue of US Sen. Ted Stevens unveiled at Anchorage airport 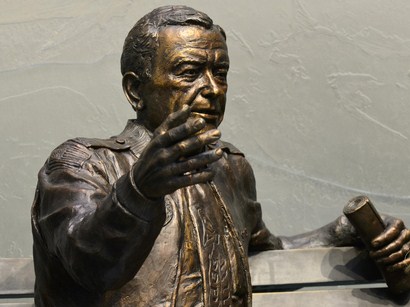 The statue shows Stevens, who served in the Senate for 40 years, with a welcoming disposition, seated on a bench.

Anchorage, Alaska (AP) - The airport that bears the name of former U.S. Sen. Ted Stevens now has a statue of the Alaska Republican.

A 631-pound bronze statue was unveiled Saturday at Ted Stevens Anchorage International Airport. It shows Stevens, who served in the Senate for 40 years, with a welcoming disposition, seated on a bench.

"It'd be nice to have something in the airport, not only for Alaskans but for travelers who say, 'Well, who's Ted Stevens?'" Waller said. She declined to say what the statue cost.

Stevens' widow, Catherine Stevens said the unveiling was a meaningful moment for her family and for the foundation, which is working to archive and curate Stevens' official papers for public release. She hopes the bench spaces next to the statue will be a special place for Alaskans, she said.

Stevens entered the Senate in 1968 and was one of the 10 longest-serving senators in U.S. history. He championed Alaska transportation and infrastructure projects, supported the construction of the trans-Alaska oil pipeline and advocated protections for Alaska commercial fisheries.

In his farewell speech on the Senate floor in 2008, Stevens said he treasured every moment.

"I feel the same way now that I did in 1968," he said. "I really must pinch myself to fully understand that I'm privileged to speak on the floor of the United States Senate."

Stevens died in a plane crash near Dillingham in 2010.

Sculptor Joan Bugbee Jackson of Cordova created the statue. Her other bronze sculptures in Alaska include the Veterans Monument on Anchorage's Delaney Park Strip, the Alexander Baranov Monument in Sitka and the Joe Redington Memorial at Iditarod headquarters in Wasilla.

She surrounded her workspace with pictures of Stevens, watched videos to study how he used his mouth and the expression in his eyes, and even borrowed his coats and posed friends in them to study their folds, she said.

"I don't want to just make a shape that looks like somebody. I want to convey something from within them that expresses more of the kind of person they were," Bugbee Jackson said.