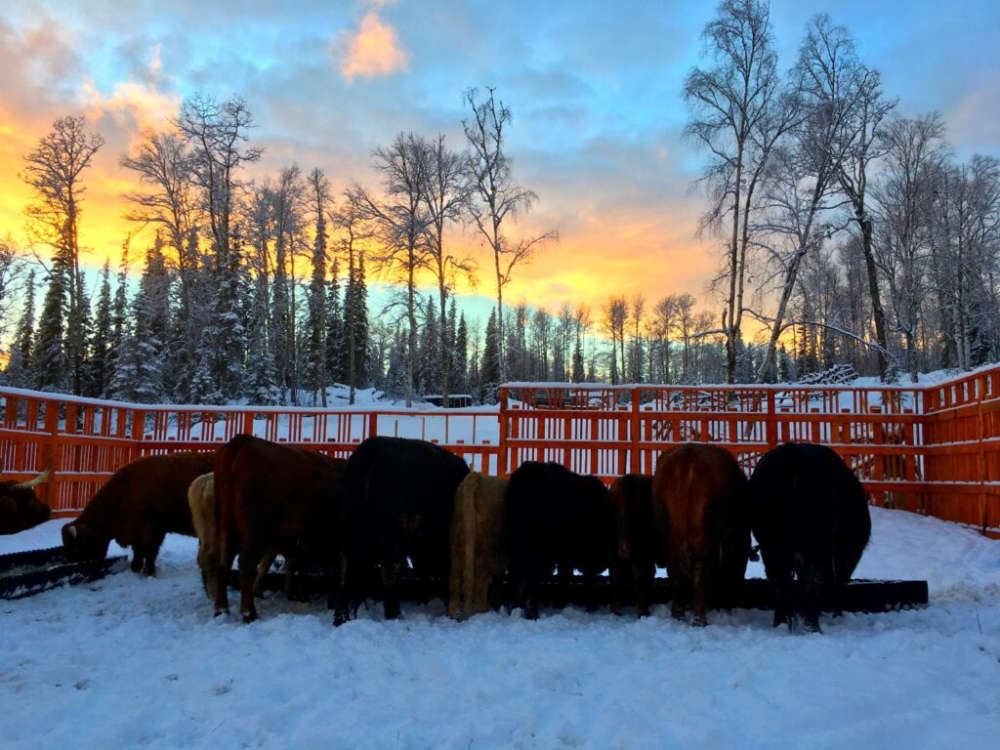 (Alaska Beacon) - The cost of animal feed has risen this year and the weather in Alaska has reduced its availability, which has prompted livestock farmers to ask the state government for help.

And while the state government has launched a financial aid program this month, some farmers say the program won’t impact the people who need it the most.

Funding is available for producers that operate a commercial livestock business. Eligible livestock are cattle, sheep, goats, swine, poultry, reindeer, elk, bison, yak – including eggs, milk, and cheese – and other animals raised for human consumption on a farm that operates as a business. Producers can apply this month.

Feed purchased from Aug. 1 to Nov. 30 of this year is eligible for partial reimbursement, but Lorraine Henry, director of communications for the Alaska Department of Natural Resources, said it’s too early to be specific on what “partial” means.

The state has designated $1 million through the Food Security Cost Assistance program to this current aid program, though all of it won’t be used in the first round, Henry said. The initial aid package is funded through a recent transfer of $1 million in appropriated food security funds from the Department of Fish and Game to the Department of Natural Resources. Gov. Mike Dunleavy’s Office of Food Security authorized the transfer.

The aid program is not open to hobby farmers, though some own a significant number of livestock. The Division of Agriculture posted information on the farm aid program on social media, which has gotten at least 125 shares on Facebook and several comments. Some were positive about the program, but there was also skepticism, particularly about who qualifies to apply.

One commenter wrote: “Unfortunately, I’m a hobby farmer so I don’t qualify despite spending 3x my normal amount on hay to the tune of $16,000.” Another wrote: “Us cottage craft producers are stuck in the donut hole.” And another: “Why does it seem like it’s only the big producers and not the little guys. We are all suffering.”

Dana Armstrong runs the Kenai Peninsula Poultry Project, a nonprofit farm in Nikiski that aims to donate quality meat and food to Alaska food banks. She raises poultry, pork, goats and rabbits on 2.5 acres that she’s still in the process of clearing.

Armstrong just started the business a year ago and is gearing up to start donations in the coming months. She also plans to start a monthly service for goat milk geared toward low-income families. She’ll sell some of the milk at normal rates to offset the cost of donations.

“I have 15 pregnant goats. So, it’s going to be a very messy house this winter because I’m going to be pulling them all from their moms and bringing them in so I can get the milk program off the ground sooner rather than later,” Armstrong said.

Armstrong doesn’t qualify to apply for the state’s current farm aid program. With only being in business a year, she said she doesn’t have the required tax filings. And she’s “furious” about the program.

“I was the one that was sounding the alarm about the hay crisis and the inflation prices as early as July to the governor’s office,” Armstrong said. She spoke to the state veterinarian’s office, the Division of Agriculture and other state leaders, she said. “I was everywhere, talking to everybody and telling them we need help.”

“A million dollars is not going to go very far,” Armstrong said. “There are a lot more farmers in the state than people realize and most of them are small and when you factor in the hay producers, the barley producers and the major farms, if there’s no cap on how much each farm can get, the major producers are going to be the ones that eat up all the funding, leaving the rest of us collapsing.”

A few factors contributed to the low supply of local feed and the high cost of getting it.

Through a state survey that’s still open, 96% of the 316 respondents so far said feed costs for livestock have increased, and almost a quarter responded that costs have increased by more than 50%.

For Armstrong, the cost of feed more than doubled. Ben Adams said the same, at least. Adams operates 4T% Farm and Ranch just outside Soldotna. He has a few hundred animals on about 18.5 acres.

“We’ve got about 65 cows and we produce beef. We also have hogs and in the summertime we do chicken, as well, and turkeys. We produce protein on the Kenai,” he said.

Adams doesn’t grow any feed on site, so he brings in 100% of what he feeds his livestock, like hay, vegetables and grain.

“We had that drought for the first two and a half months of summer, and then around July 15 or so, at least in Southcentral, it started raining and didn’t stop,” Adams said. “You know, the whole year has just been a nightmare of trying to get the feed if you can get it and then the cost of it going through the roof.”

It’s part of the reason he downsized.

“You can find a video of me on YouTube sobbing like a baby when I had to shoot pregnant cows in the head because there’s no feed for them,” he said.

But Adams said, it’s not just the cost.

“The cost is bad enough, but availability is a much bigger issue. I mean, if the weather doesn’t cooperate, I could have a million dollars in gold coins, but if the hay and the barley doesn’t exist, it doesn’t exist. I mean, so that was a big part of the problem, too. It just wasn’t there,” he said.

Adams said he’s torn about applying for the state farm aid program, but ultimately thinks he will.

“On the one hand, I think the more people that apply, the more the state will realize that a million dollars ain’t diddly squat. And there’s a much bigger need than that,” he said.

“On the other hand, I don’t need the money as much as other people do. And I would rather the money go to somebody with two or three cows that’s really struggling, because I’m okay,” Adams said. “And I don’t like the government very much and I don’t really want their money, to be honest with you.”

Ultimately, Adams said, funding should go to Alaska farmers who grow feed, instead of distributing it to livestock farmers who may end up purchasing hay that comes from Washington state growers.

“It’ll keep maybe some livestock alive, but it doesn’t really, in my opinion, go to the heart of the problem, which is making sure that the people who produce the inputs in the first place stay in business,” Adams said.

State aims to get money out quickly

Both Adams and Armstrong don’t like that there’s ambiguity about how much of the farmers’ feed costs the state will reimburse.

Commercial livestock farmers who apply and qualify for the farm aid program can expect to receive the funding in the first quarter of 2023. After that, the second round of applications will likely target feed growers, said Henry, the DNR communications director.

Henry said the state is aware that there are a lot of other agricultural needs out there.

“We just had to start somewhere and we’re doing our best to kind of get the money out quickly, which is why this is only open for a month. We’re taking applications just for December, so we can help get money into the hands of the livestock producers as soon as possible,” she said.

The state also offers other financial assistance programs, Henry said, like microgrants for food security, specialty crop grants and a revolving loan fund. She added that the Legislature passed and Gov. Dunleavy signed, House Bill 298, which creates a Forgivable Agricultural Loan Fund. DNR is currently working on regulations for the program.

The current farm aid program was first announced on Dec. 1, when the application period opened. As of Monday, the state had received four applications. The deadline to apply is Dec. 31.