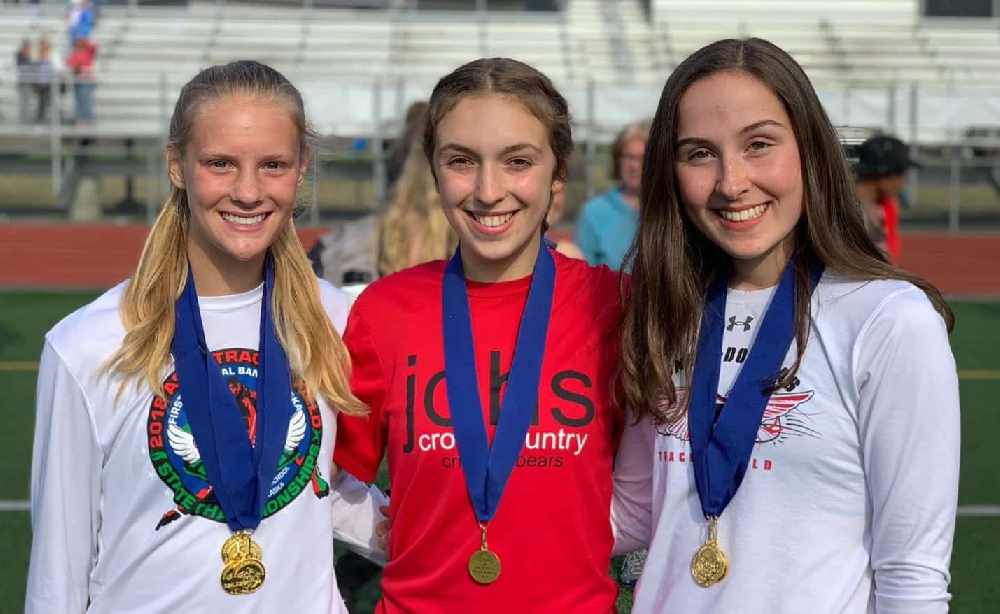 The trio of Katie McKenna, Anna Iverson and Sadie Tuckwood had a banner year last season.

Anna Iverson, Katie McKenna, and Sadie Tuckwood formed an outstanding senior running trio whose dedication to running and their team has shaped and inspired their JDHS teammates and coaches.

Their cumulative years in cross country and track (22) have resulted in the girls winning the Alaska State Championship (2018), as well as capturing four years of Region V cross country titles.

The cross country combined girls and boys team has grown from 42 to 70 athletes, approximately 10 percent of the student body.

Tuckwood set new records on every course in our Southeast Region, she posted one of the top five times on Alaska’s State course (18:16), she was awarded the Alaska Gatorade Cross Country runner of the year, and she is the only athlete (boy or girl) to reign for four years as Region V champ. Her top-five performances at the renowned Warner Pacific Invitational in Oregon (October 2018, 17:50) and Nike Hole in the Wall in Seattle (October 2019, 17:36), as well as winning the Steens Mountain Running Camp uphill 5k, firmly landed her as one of the fastest female runners in the Pacific Northwest and one of the greatest ever to run in Alaska.

Iverson logged impressive places and times on all Southeast courses. She ran a 19:11 in Ketchikan and last fall at the Region V meet, set a personal-best with a 19:10 performance. With two consecutive top-15 finishes at the State Meet, Iverson solidified her place as one of the state’s fastest runners during a time where Alaska has seen an unprecedented level of high-caliber female runners.

McKenna also graduates as one of the valedictorians of her high school class and after four years distinguished by hard work will attend Williams College in Massachusetts, where she will run and study medicine and public policy. A National Honor Society member in her junior and senior year, she will be studying nursing and running at Pacific Lutheran University.

Tuckwood will be running for the D1 Gonzaga Bulldogs.