Special guest, retired Army Major General Richard Mustion, traveled from Tampa, FL to be a part of the ceremony.

It was the first time a Major General attended the ceremony.

Mustion said he served in the army for just over 34 years.

He said what it meant to him to be a part of Veteran's Day in Juneau.

"Very moving, very humbling to be around so many veterans, particularly those who served in the Vietnam era. So it's a tremendous experience to be here. It feels good to be able to stop and pause for a short period of time on a day to recognize that our mission wouldn't be what it is today. We wouldn't experience the freedoms that we have and the strength of our nation wouldn't be what it is if it weren't offered the veterans and the sacrifices and the services that they've given on behalf of our nation."

Mustion compared visiting Juneau to his past experiences in Alaska.

"It feels good. It feels different also because my experiences before in Alaska were between January and March in those years. It was way up north. So it's like 40 below zero when I was in Fairbanks. It's nice to be able to be down here to see a completely different environment with the Alaskan Natives that are here in this particular area."

Mustion said what stood out to him the most about meeting the Alaska Native veterans.

"They're very passionate about their service and things that they've contributed to the nation. That stands out and they take a lot of pride in what they've done. That really stands out and you see that in the room when you're talking to the veterans." 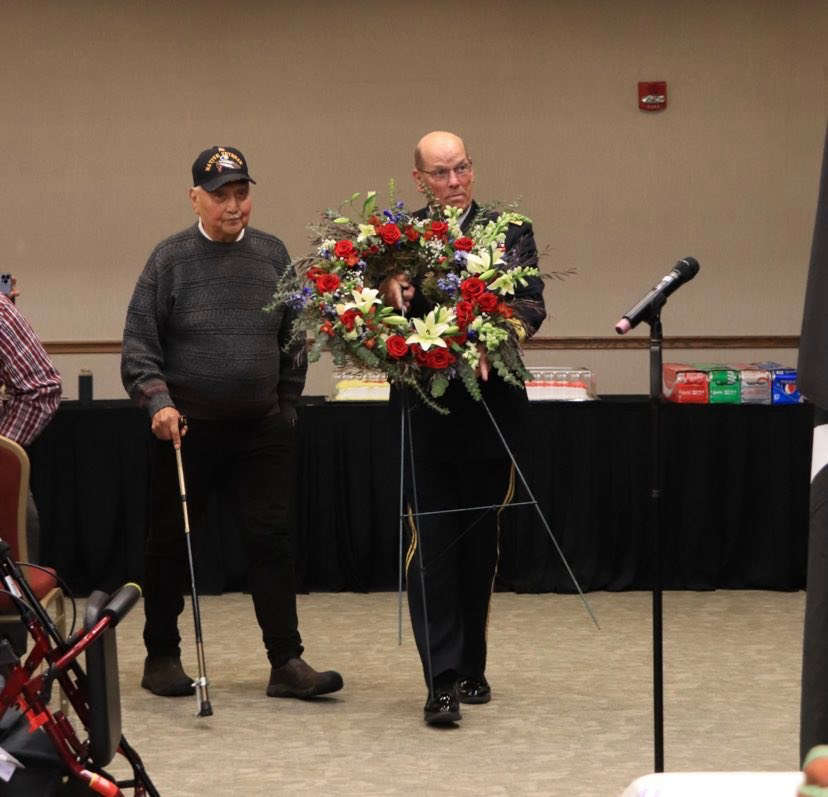 Above: Army Veteran Ray Wilson (left) and Army Major General Richard Mustion (right) lay the wreath. Below: Mustion gives a speech on Alaska Natives' vital role in the U.S. military and thanks them for their service. 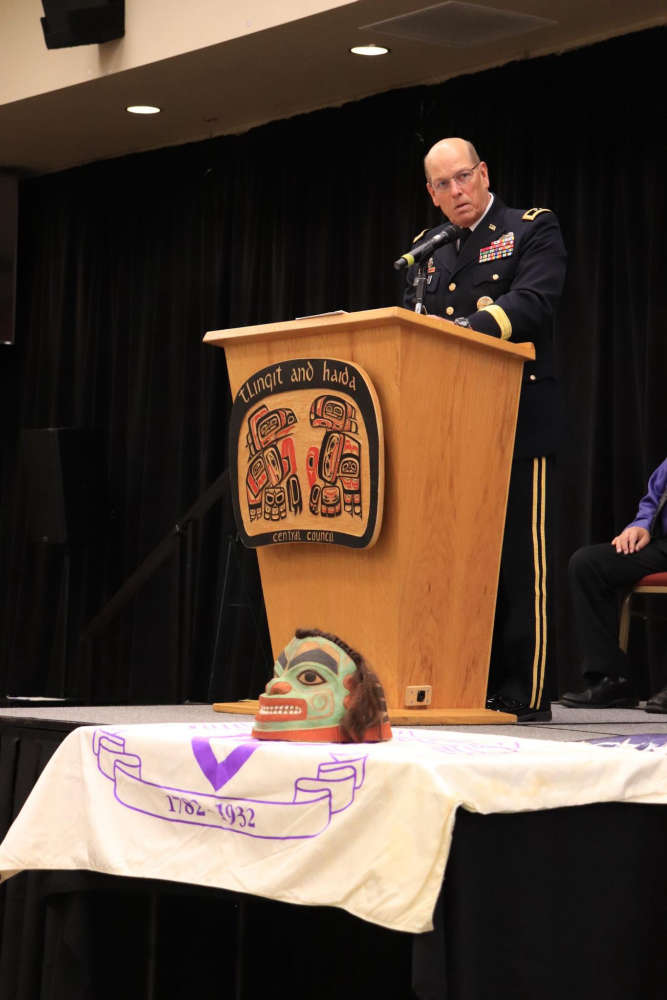 "The introduction that we say all the time in Lingít, we always say noble people, self-respecting people. We say that in our language as we open up. I can't think of a better crowd to say that in front of today. You honored warriors, you self-respecting representatives of our people. But that fight for freedom, we know too well. That fight for our homelands was built core into who we are as people. It's part of our DNA, our homelands our families, our culture, our people. And when you came home, from whatever battles or war or representation that you did in the military service, you kept that. Today as I'm looking at the audience, I see warriors of culture and language." 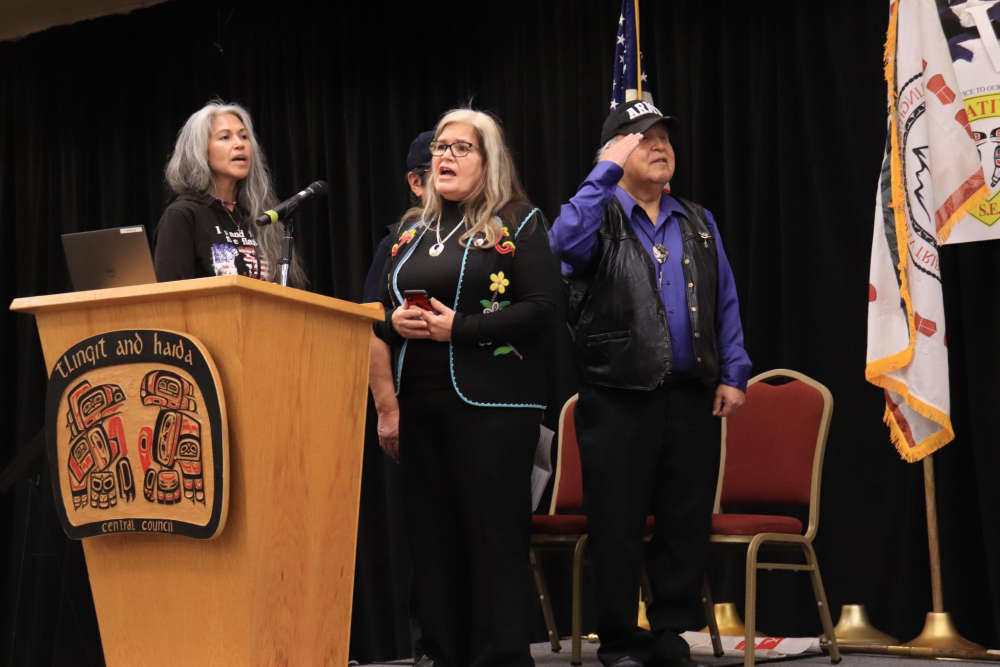 Pata said that the vest she wore Friday was her uncle Bob Anderson's vest, a purple heart recipient.

"Veteran's Day to me means we can honor all those veterans who weren't able to come out, they stay home a lot. Today they get to enjoy other people. We lost a lot of veterans in the last three, or four years. When a veteran dies, they're allowed one flag folded to them. That's why I brought this flag to remember all those veterans who died." 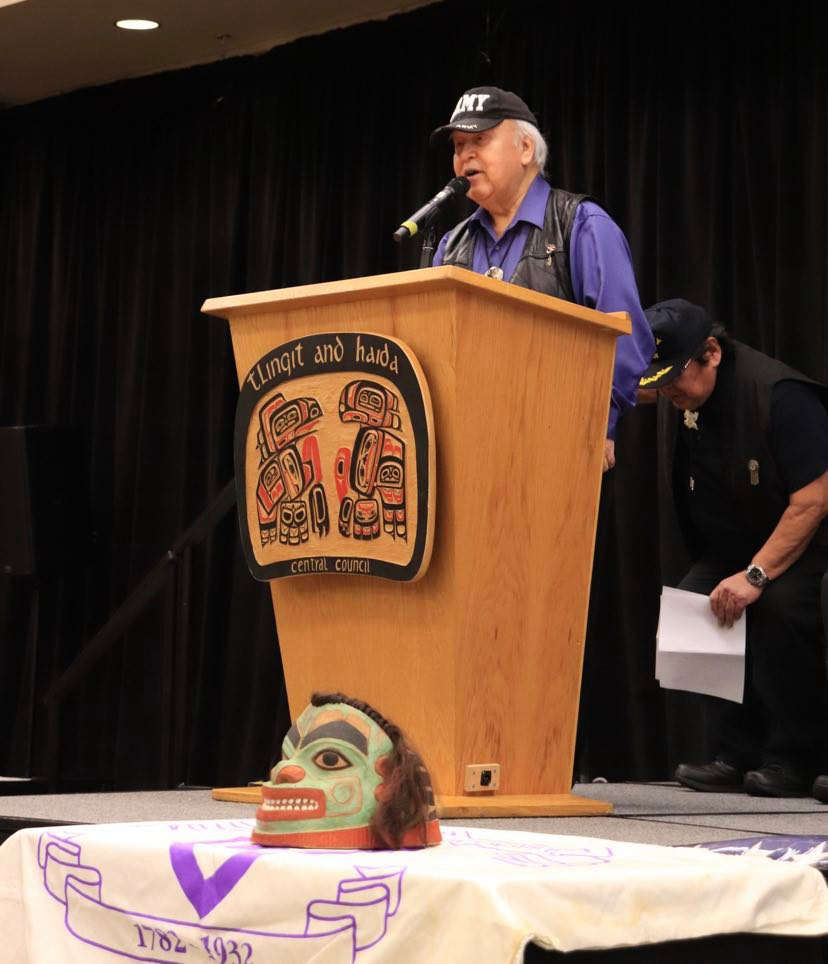 Above: A Lingít war mask Sheakley says is very special rests on top of the folded Purple Heart flag. Sheakley stands on the stage. Below: Veterans began the ceremony with the Posting of Colors. 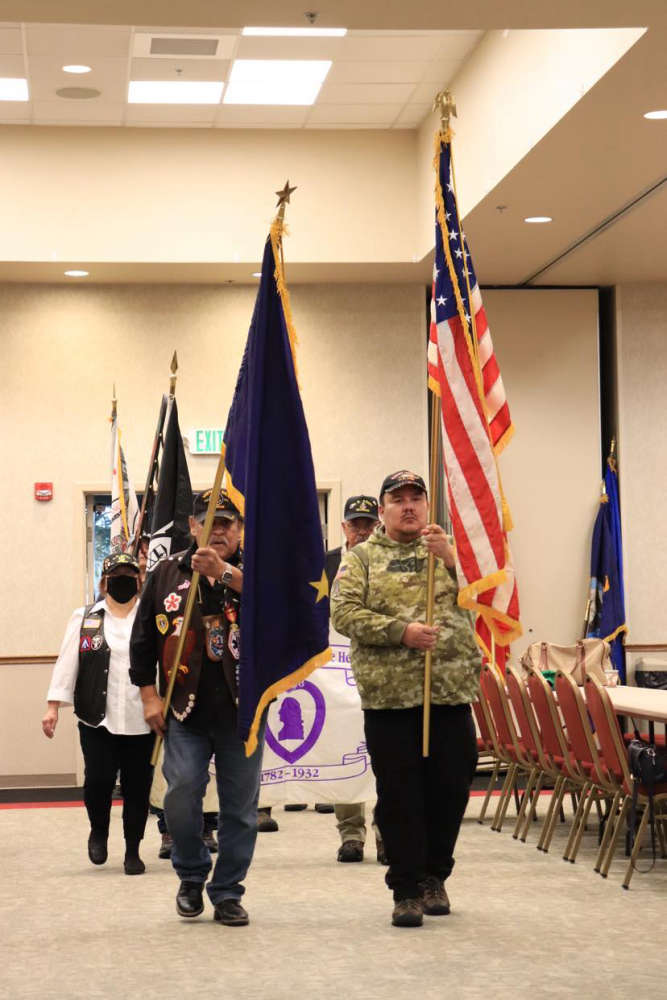 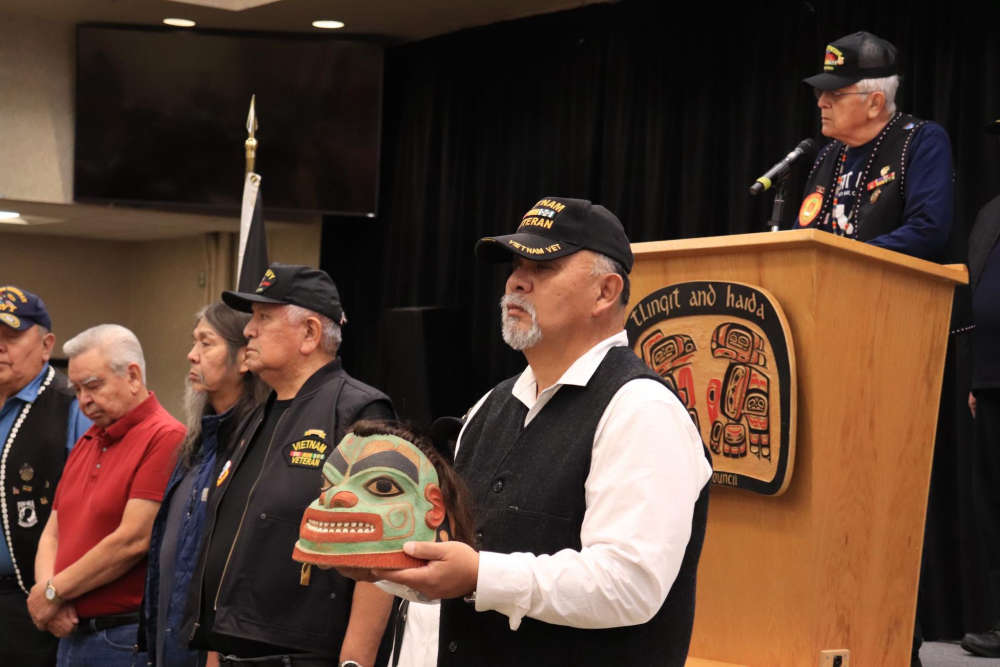 Sheakley explained the significance of the war helmet that was carefully handled during the ceremony.

"The helmet, we usually talk about helmets used in World War Two, and Korea, those ones. But we used that helmet for a long time, and then we were told that it belonged to the United States. The Russians sold it and told us that they owned it. It's important to have that here but it's special to have those. There were warriors before Americans came up here and the Russians came up here, they used it when they fought. So we don't use it. We make sure it's carried up here all the time and respect the helmet because it belonged to somebody that was in battle before. To us, those things are our people. Everything they taught, all our regalia and blankets we use, through us they're people that used to wear it before us in the past. Their spirits are still with the blankets or the dance regalia. Including this here, where someone wore it before us. So it's like they're joining us here now too." 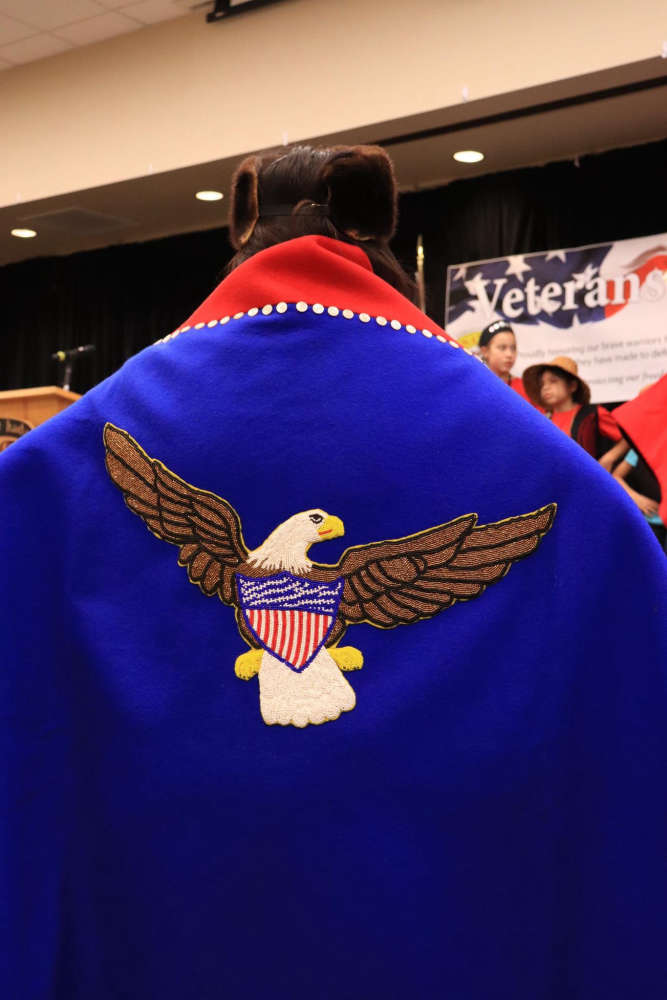 Above and below: A Lingít dance group performed while Veterans enjoyed their lunch. 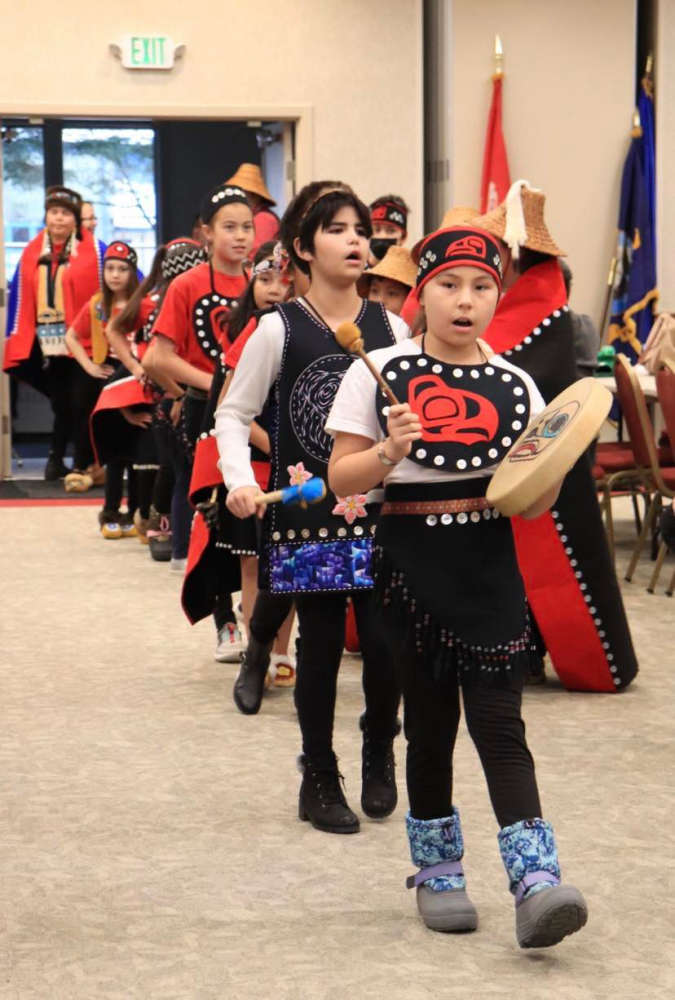