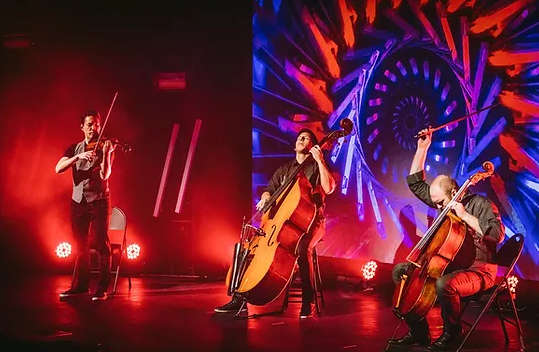 It was Simply Three's first time in Juneau.

The band joined Dano on Capital Chat Friday to talk about the show.

Zack Clark on cello talked about how Simply Three began.

"Well, all of us, we started classical music. We were all classically trained, and we had private teachers. And growing up, we all went through the public school system in our respective states. And I think all of us were on the fast track to being a classical musician, being in a professional symphony orchestra one day. And there came a time in each of our lives where we found out that we didn't necessarily want to be on that track. We love classical music. We love symphony orchestras, but we wanted to do something a little different."

Glen McDaniel, Simply Three's violin player, said how he was introduced to the band.

"I met Nick about a decade ago, just through another musical group that we were both a part of. And at the time, Nick and Zack, Simply Three had already been established and they were kind of going through a transition musically with their violinist at the time. And I was also going through my own professional transition. And Nick mentioned wanting to do a video before things were solidified. And then we did that and then we played some more music together on the stage. Things felt good, so we just kind of went forward with it together."

McDaniel responded to a question on how they choose the songs they play.

"In everything, there have been moments where someone just kind of rolls the dice and does everything on their own. And we usually end up meeting together just to confer with one another because we each know our instruments best, right? There have been moments where each of us has done an entire arrangement and talked to the others to see what we like, there have been other moments. What's an example, like 'Honey, I'm Good.' That's a really fun one. We definitely sat together for a long time with that one just to come up with a unique arrangement. So that one was very collaborative as far as the pop covers are concerned."

"We have a great mix of music on Saturday. We have pop songs, we have some classics we have some alternative rock songs, and we have original music as well. We have some very, very beautiful things as well."

Villalobos said where they're heading next on their Alaska tour.

"We're headed to Sitka actually next week and then Anchorage as well. We actually do have a new album coming out at the end of the month, September 30th. It's actually a hymns album but we've put our Simply Three sauce all over it. We even have like some rockin' drums, like full drum set for some of the hymns. It's like you've never heard them before. And we're actually hoping, fingers crossed guys, that we can get enough time on Monday and Tuesday in Sitka, where it's not raining because we want to go out and film part of the music video for one of the songs."

Villalobos and Clark said to find Simply Three and follow their music, go to simplythreeofficial on Youtube or type in Simply Three to Google.

Simply Three has over 50 music videos on its Youtube and over a million followers.