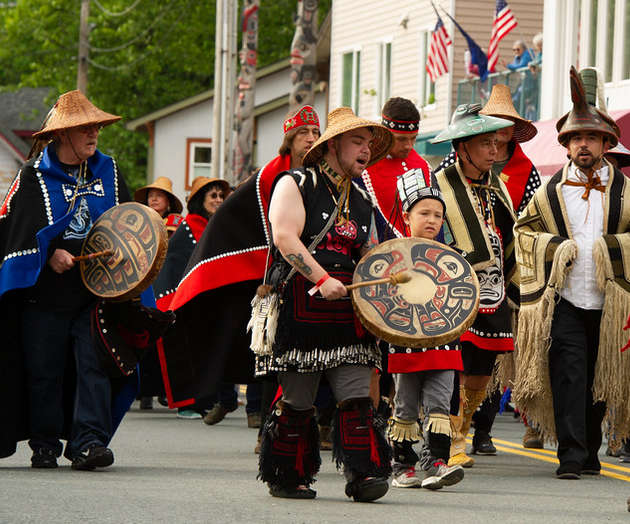 The Shx’at Ḵwáan at the 2018 Celebration. (Photo by Todd Antioquia for Sealaska Corporation)

Juneau, Alaska (KINY) - At this year's Celebration, two dance groups from Wrangell will lead the way for the first time in four years.

The Shx’at Ḵwáan is led by Wrangellite Dixie Hutchinson. She spoke to News of the North about the importance of Celebration to the dance groups and the community.

"For Wrangell, when it was announced in 2018, at the end of Celebration, that we were the lead dance group for the next celebration, we quickly realized that this would be something special for the entire community," Hutchinson said. There are two dance groups and Wrangell... So we knew exactly when that was announced that it had to be all of the community taking part."

Hutchinson says both groups will focus on the community's history when dancing.

"We are excited to dance together," Hutchinson said. Both groups always get together and support each other at our performances at Celebration. So, this is nothing new to us in terms of representing ourselves, but for this year, because we're the lead dance group, you know, we want to make sure as leaders of the dance groups that people understand their history."

And the dancers will be representing the entire community of Wrangell, not just their groups.

"We've made a lot of effort to document the history and make sure that those who come from that history are well informed of what Celebration means to the dancers," Hutchinson said. "They understand that we want to represent the entire community and not just those in a dance group."

Hutchinson also spoke about the reasons why the late Elder Marge Byrd stood up the Shx'at Kwaan dance group.

"When Shx’at Ḵwáan was stood up by Auntie Marge, Marge Byrd, she did it for the community, not just for a select few people," Hutchinson said. "So, we wanted to make sure that legacy was carried on."

The grand entrance is set for Wednesday, June 8 at 6 p.m.