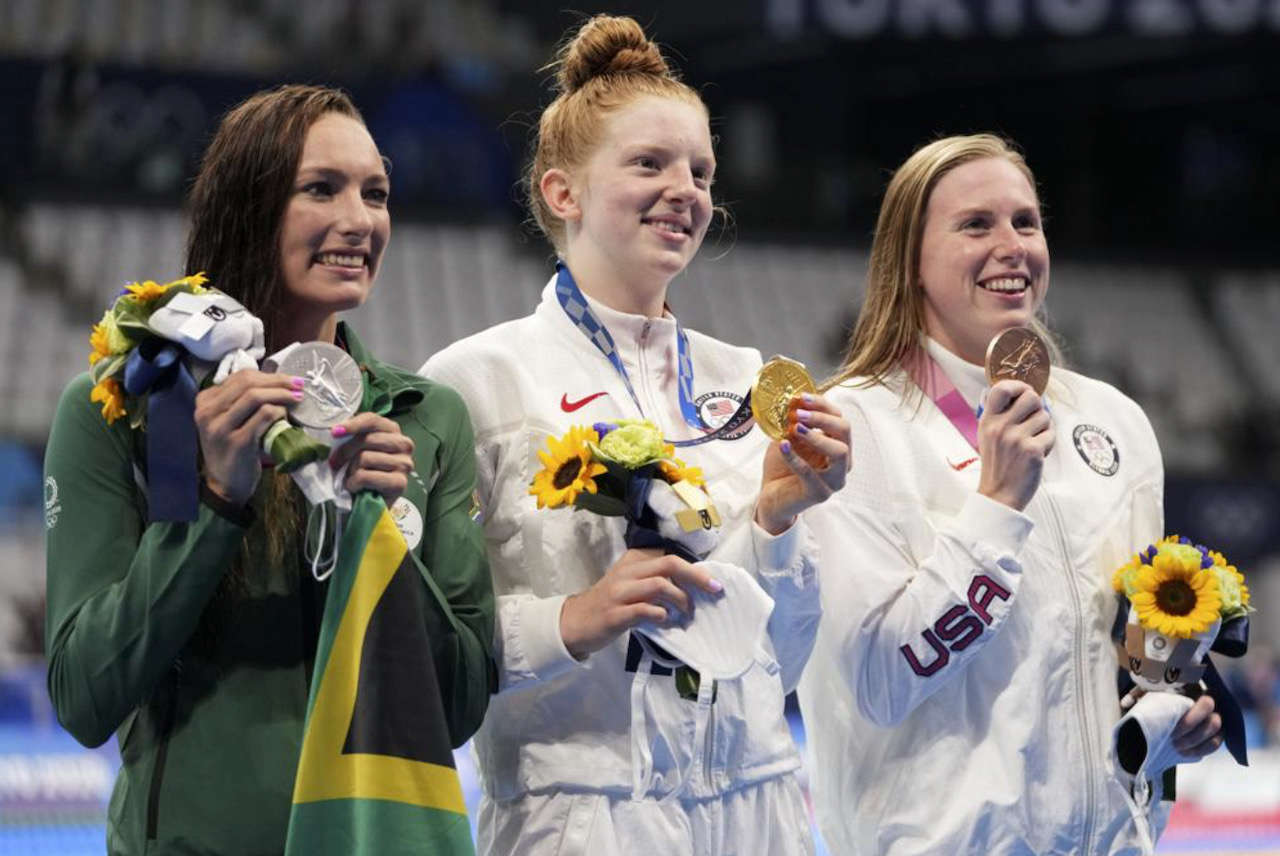 "I was definitely racing for a medal,” Jacoby told Olympic media. “I knew I had it in me. I wasn't really expecting a gold medal, so when I looked up and saw the scoreboard it was insane."

As Jacoby touched the wall and looked up, she looked stunned. King swam over, holding her hands and slapping the water in joy.

“I’m surprisingly OK right now,” King said after the race, adding that she was thrilled for Jacoby. “We love to keep that gold in the U.S.A. family, and this kid just had the swim of her life.”

Jacoby moved to Anchorage earlier this year to train. Her community watched live from Seward, jumping and screaming in joy as No. 1 displayed against her name in the pool. Her parents were at a watch party in Orlando, Florida and went viral when her mother was shown recording the race in Tokyo on her iPad.

Jacoby’s shocking win salvaged what had been a bit of a disappointing morning for the Americans.

Britain went 1-2 in the men’s 200 freestyle. Russia did the same in the men’s 100 backstroke. And the Australian women claimed their second gold of the Tokyo Games.

Through the first three finals, the U.S. had only managed a pair of bronze medals, losing a men’s backstroke race at the Olympics for the first time since 1992.

Then the high schooler came through.

Jacoby was third at the turn, trailing Schoenmaker and King. But, with her head bobbing furiously out of the water, the teenager surged past King and glided to the wall just ahead of the South African.

Looking at the scoreboard with a bit of disbelief, Schoenmaker reached across the lane rope for a hug when the enormity of her accomplishment finally hit. Then it was King bounding over from two lanes away to congratulate America’s new breaststroke queen.

Jacoby’s unique journey has also added a bit of intrigue to a swimmer who is heading into her senior year of high school in one of her country’s most remote outposts.

That’s a bit of a stretch, of course, but Jacoby did had to deal with her local pool closing during the COVID-19 pandemic, forcing her to train about 2 1/2 hours away in the state’s biggest city, Anchorage.

Jacoby never let the hardships get her down.

“She’s so sweet. She’s just a ray of sunshine,” American backstroker Regan Smith said. “I had a ton of confidence in her, absolutely.”

Said King, “I’m so excited for Lydia. I love to see the future of American breaststroke coming up like this and to have somebody to go at it head-to-head in the country. I definitely knew she was a threat and saw a lot of myself in her effort.”

King won gold in 2016 in Rio de Janeiro. She owns the world record. Of the five fastest swims in this event this year, she owned four of them.

Seward’s population of 2,773 doesn’t care about past records, only setting new ones.

Jacoby is the first swimmer and only the 10th Olympian to be born in Alaska.

“A lot of big-name swimmers come from big, powerhouse clubs,” Jacoby said. “I think that me coming from a small club, and a state with such a small population, really shows everyone that you can do it no matter where you’re from.”

Seward’s swimming pool is closed as much as it is open. Only Anchorage’s Bartlett High School, where Jacoby sometimes trains, has an Olympic-size pool and they are raising funds through a GoFundMe site to buy new starting blocks.

Jacoby has committed to swim for the University of Texas in the fall of 2022, after she graduates from Seward High.

3 - Her pre-pandemic personal-best was 1:08.12. She swam more than ever during the pandemic, even though the only pool in Seward was shut down for months. Jacoby and her mom, Leslie, got an apartment in Anchorage and she trained with the Northern Lights Swim Club through the summer of 2020 and beyond. It was the first time she trained year-round -- the Seward Tsunami Swim Club is a six-month program.

4 - She dropped out of this year’s Mount Marathon junior race. Something else came up that required a trip to Japan.

5 - She plays stand-up bass. She’s a singer and a guitar player too, and she spent a few summers performing at Alaska folk festivals as a member of the Snow River String Band. She hasn’t sung the national anthem at any baseball games, said dad Rich Jacoby, “but she’s done it before a couple of swim meets.”

6 - She became an Olympic dark horse in April with a 1:06.38 at a meet in California, where she placed second to world record holder Lilly King. Afterwards she talked about the prospect of someday catching King: “It’s definitely crazy to think that. But that’s how the sport works. You think about how you can tweak things so you can get closer to the next person. I’ve done that my whole life. It just so happens the next person now is the world record holder. It’s cool.”

7 - Both of her parents, Rich and Leslie, are licensed boat captains in Seward. Rich is a maritime instructor at the Alaska Vocational Technical Center and Leslie is the educational coordinator for a marine science program at Kenai Fjords Tours. Rich also leads expeditions to Antarctica. 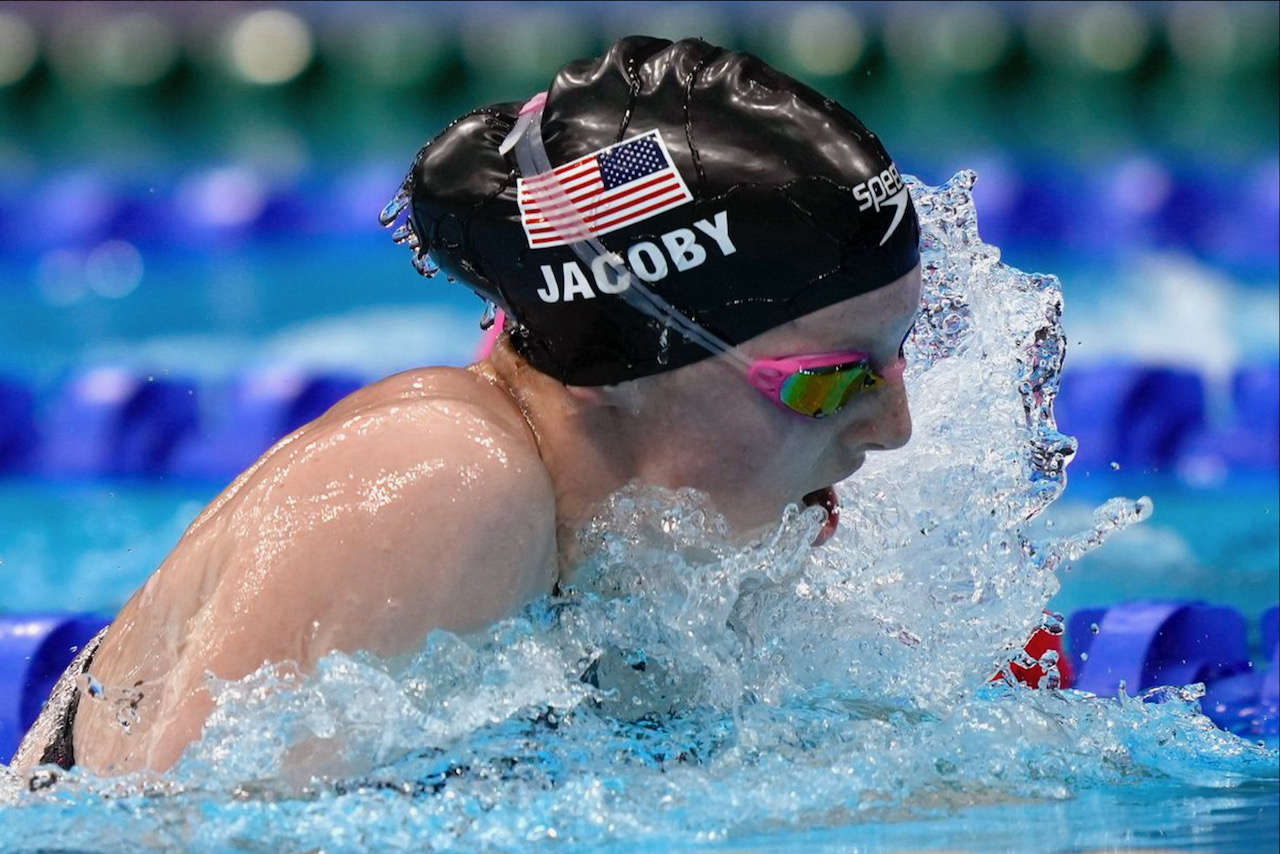 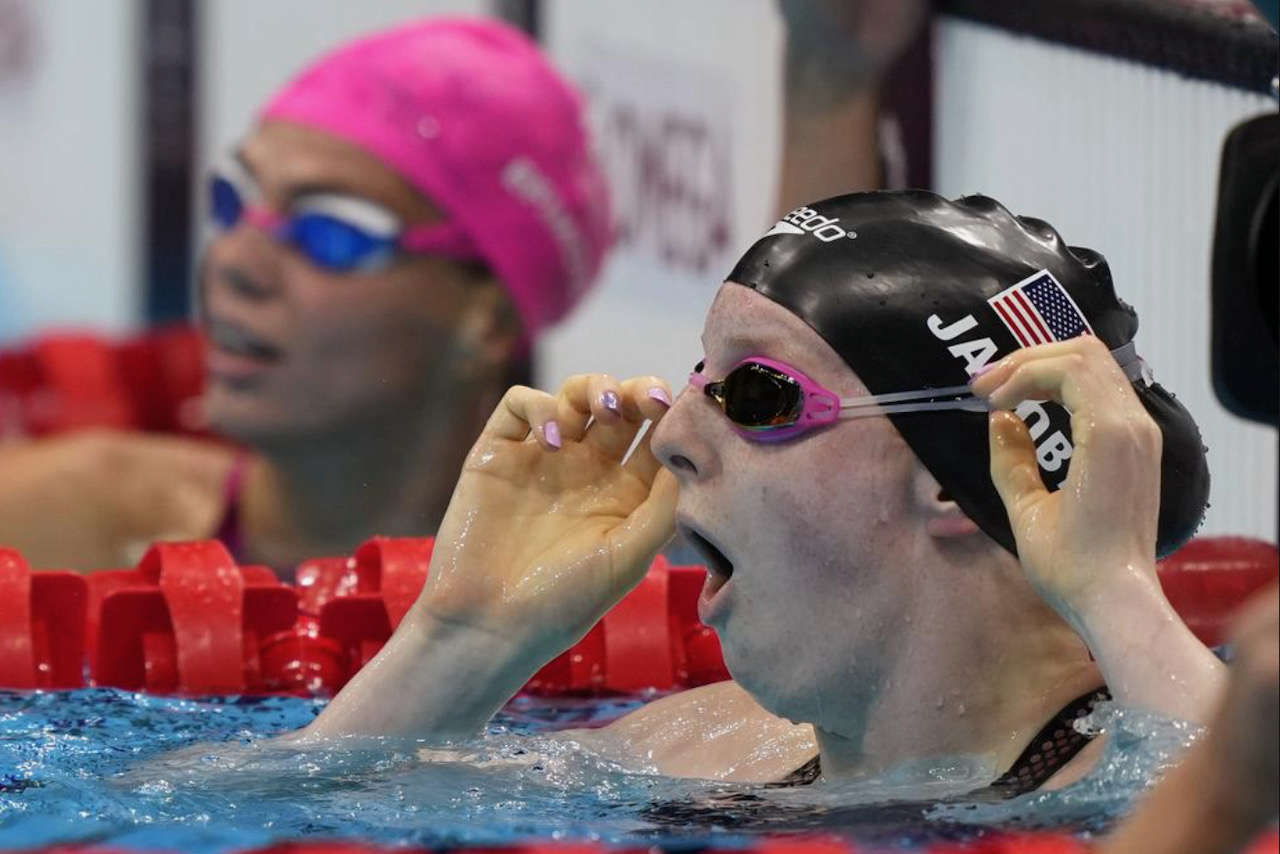 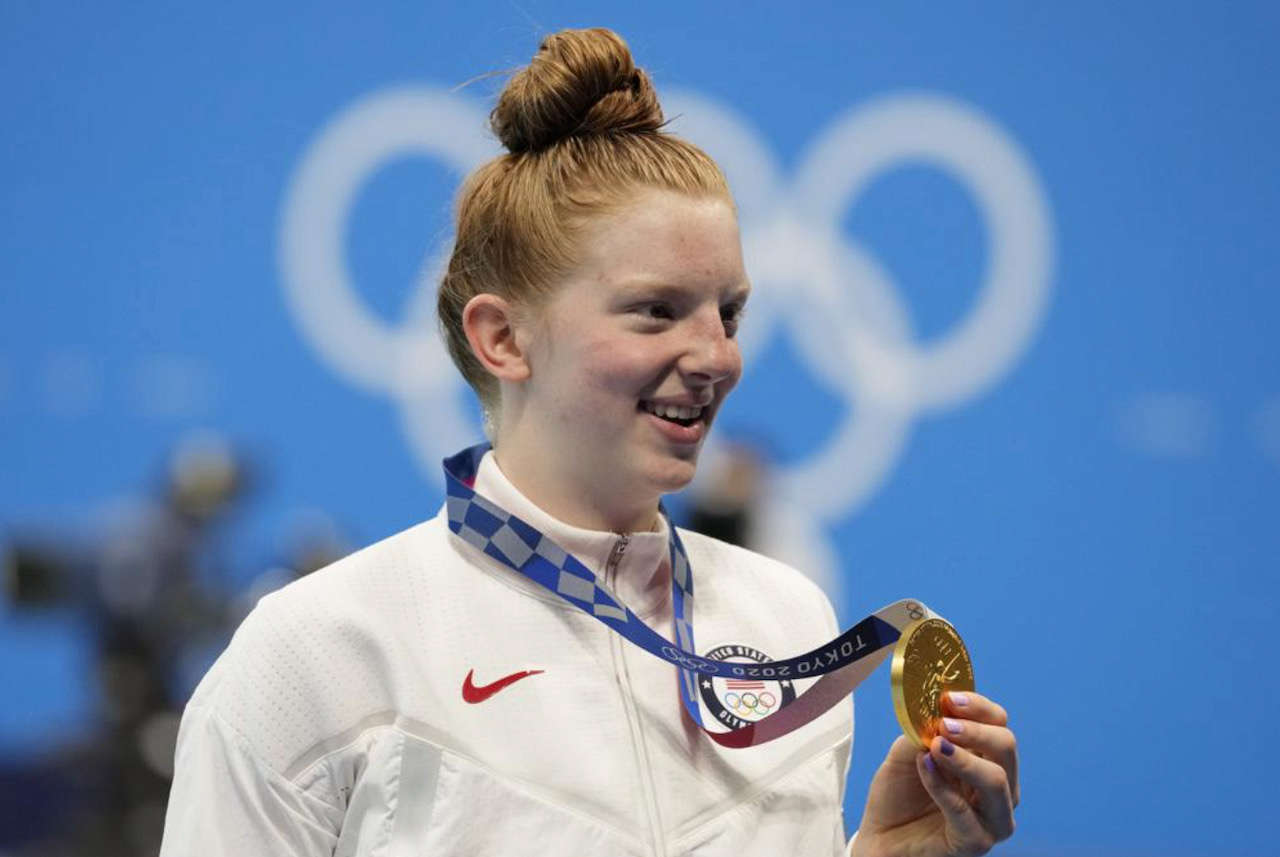 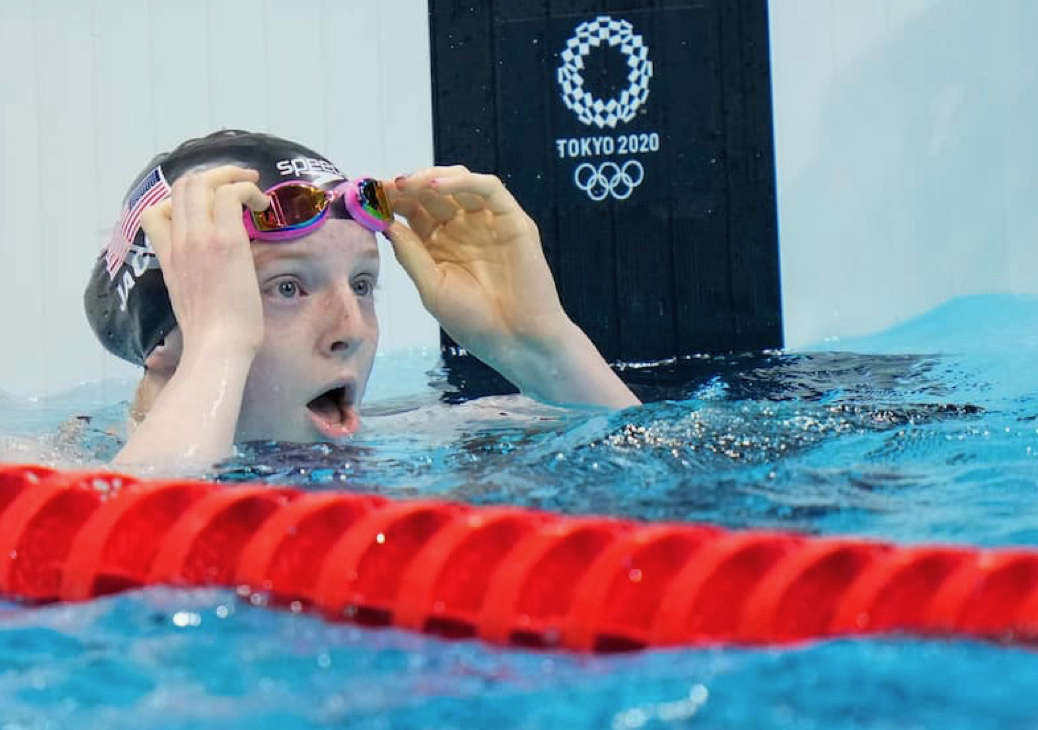 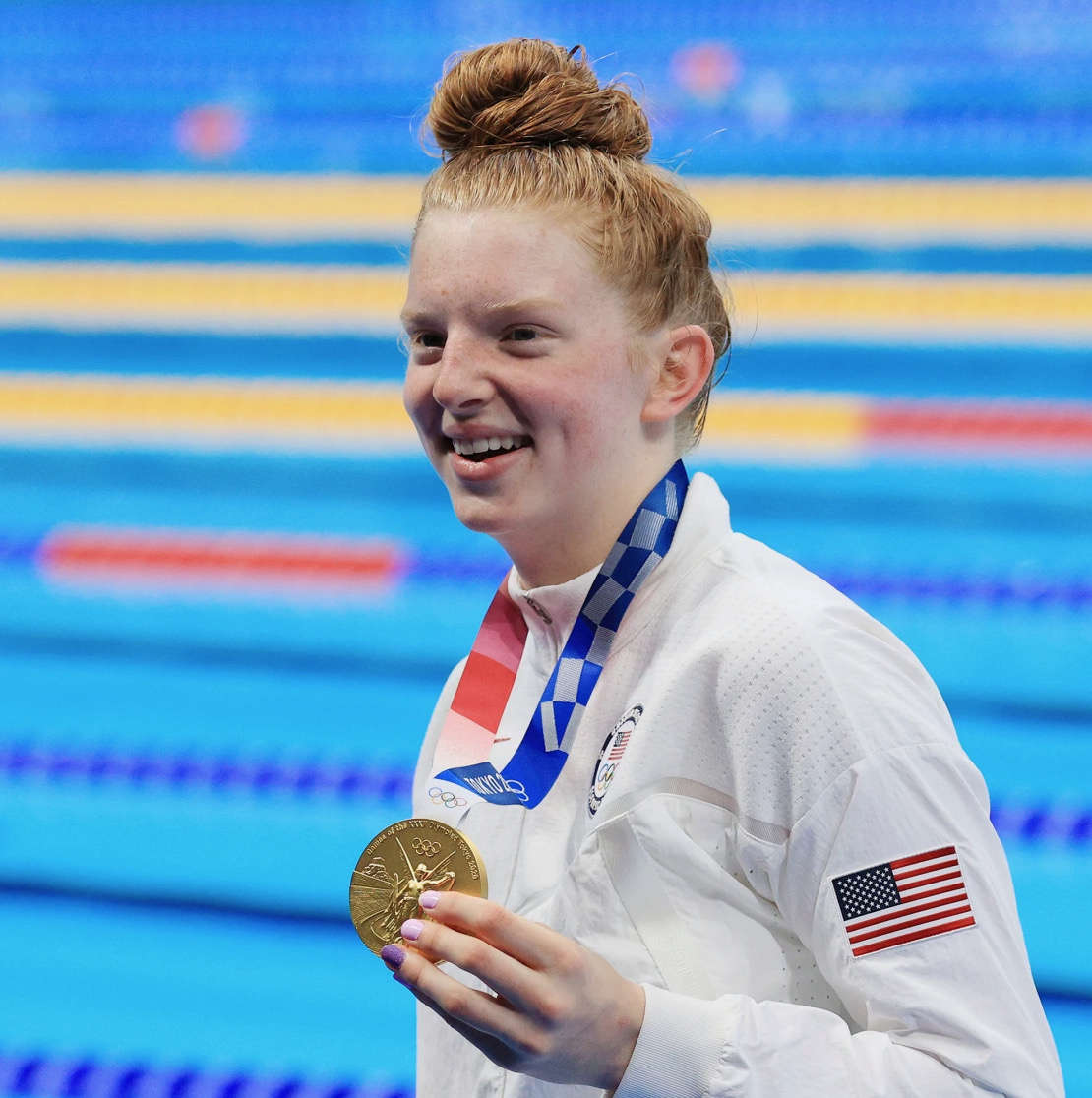