Sen. Sullivan comes out in support of border wall 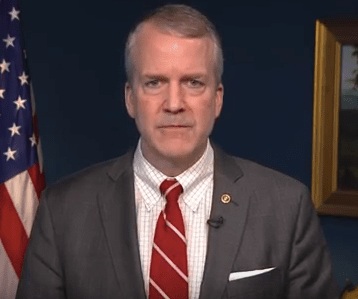 "Today I want to spend a few minutes talking about the partial federal government shutdown and on the broader debate we’re having here in D.C. on the issue of border security and how it relates to that shutdown.

First, I want to make it very clear: I support the president in his efforts and in his Administration’s efforts to secure our border.

This is something that every nation does to protect its sovereignty and in my view is not something that should be viewed as very controversial—securing the border of your nation.

Over the past 25 years every president of the United States, Democrats and Republicans, has attempted to secure our Southern border. They’ve all said they would. Even this Congress over many years has said we should.

This Administration is trying to keep the promise made by the President to do just that. And I support that.

The goal is for a functional immigration system that secures our border, enforces the law and importantly keeps families together.

We don’t have that now. I agree with the president, and the Customs and Border Protection commissioner, who has called the situation on the southern border a security crisis, but importantly, also a humanitarian crisis.

Two issues that I’m particularly concerned about and have focused on as your Senator and I know that most Alaskans are most concerned about are actually related to the porous border down south.

Both of these issues are tied to a porous southern border.

Most people who come to this country we all believe are good people coming in good faith. But not all of them are.

It’s a fact that drug smugglers, and human traffickers are exploiting our border with Mexico.

And it’s also a fact that strong borders work.

Of the southern border’s 1,950 miles, a physical barrier today protects about 650 miles. Border Patrol areas with enhanced or expanded barriers have been successful. That’s a fact. They have seen a 90 percent decrease in illegal traffic.

Now, over the past month, Speaker Pelosi has called the so-called wall “immoral.”

I couldn’t disagree more. In my opinion what’s immoral is not addressing the humanitarian crisis that ruins lives on both sides of the border—some of the issues I’ve been talking about in terms of human trafficking and the horrible opioid and heroin epidemic that’s hitting our country and our state.

I wish I could tell you when this is going to end—the partial government shutdown. The good news is we actually last year funded the vast majority of the government through the appropriations process. But while this continues, I will continue to work with federal agencies to try to minimize the impact of the shutdown on Alaskans.

Let me give you a couple of examples. Throughout the holidays, I worked with senior officials at the Department of Commerce, including the head of NMFS, Alaskan Chris Oliver.

Working together, we made sure that the cod fishery opened on time and we will continue to work day and night to make sure future fisheries openings in Alaska, some of which are coming in the next week, also open on time with federal government support.

Earlier today, President Trump came to the Capitol to meet with Republican Senators.

I was able to commend his team to him for working with us to keep our fisheries open—that’s hundreds of millions of dollars for Alaska communities and hundreds if not thousands of people working in our fishing industry who are out there fishing now.

And I also personally encouraged him to continue to make sure that federal agencies are helping Alaskans and Americans. For example, I mentioned FEMA—as it continues to work on the recovery from the massive earthquake that hit our state on November 30—to make sure FEMA is helping Alaskans now to the extent allowed by law. And that was an issue I raised with the president today.

Finally, Alaskans should also know that I’ve introduced a bill that ensures that members of our Coast Guard continue to get paid through the shutdown. The Coast Guard is the only branch of the five branches of the military that isn’t getting paid. The Army, Navy, Air Force and Marines are.

I know it’s a difficult issue because other federal agency members are not getting paid. But I believe that the brave men and women of the Coast Guard throughout Alaska and our country—who do an amazing job and are risking their lives every day for us protecting the homeland, keeping our fisheries safe and secure—should be getting paid.

I raised this issue with the president as well today.

I know this shutdown is tough for many federal workers and their families in Alaska. They do great work for us and our nation.

We’re going to keep working hard on all of these issues, but I wanted to make sure that you heard directly from me in detail on some of the things we’re debating and discussing in the Congress right now.

Thank you for your attention on these issues and if there are other things related to the partial shutdown that you or anyone else in Alaska need help on, do not hesitate to call my office. Thank you."