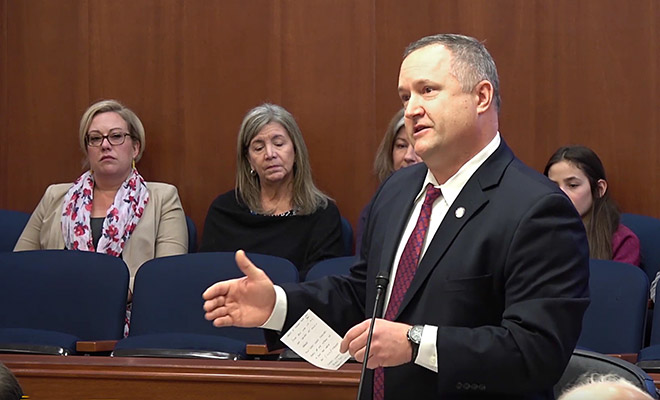 Alaska State Sen. Mike Shower on the floor of the Senate in 2019.

Juneau, Alaska (KINY) - State Sen. Mike Shower, who represents the Wasilla area, has been hosting a number of Facebook Live events in recent weeks to address the COVID-19 pandemic.

During many of his live events, and in an interview with News of the North, Shower says the virus, while deadly, is killing mostly those with advanced age or underlying conditions.

"The virus is here and it's going to continue to be here until we achieve what they call herd immunity where enough people have it," Shower said. "The reality is only a very small fraction of the population, usually the very elderly or those with underlying health conditions, have any significant impact of dying from it."

Shower says business owners and workers in his district, and statewide, are being negatively impacted by the protracted lockdown orders.

"I got back to my district and I have gotten hundreds of emails, phone calls, and Facebook messages, and they all are saying the same thing... that we're dying out here not from the virus, but we're dying from the cure," Shower said. "[We're] shutting down the economy and businesses and people have lost their jobs by the thousands and businesses are being shuttered by the hundreds. People are not going to survive economically."

When it comes to the lockdown, Shower said he has issues with the constitutionality of the orders in Alaska and in the lower 48.

"We have a little bit of a constitutional issue I'm concerned about because we're in a quasi-state of martial law without really having declared it, where we are interrupting people's right to assemble, due process, shutting down businesses, and travel," Shower said. "I want to be crystal clear that I'm not minimizing the disease, that it does spread quickly and that people get it and some people are affected, but a very small portion. I'm asking the hard questions because everybody wants to take the more emotional [approach]."