Sen. Kiehl 'guardedly optimistic' about the possibility of a coalition Alaska Senate 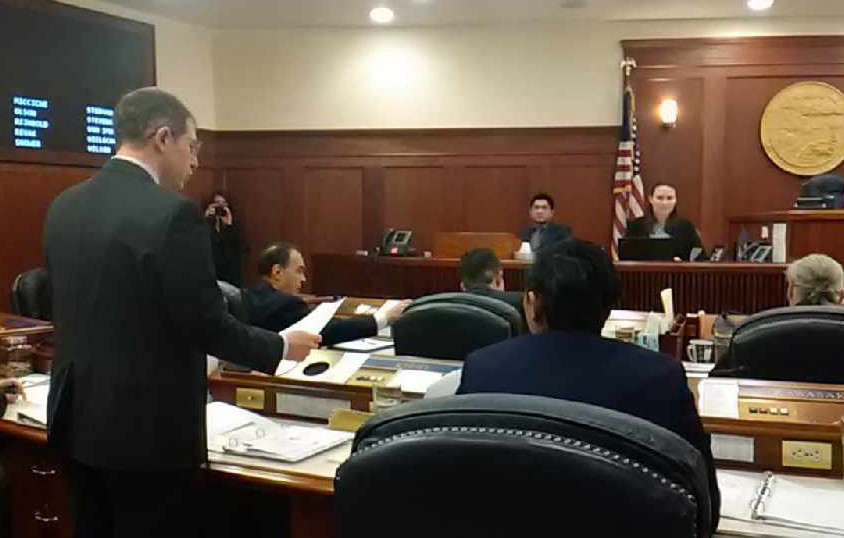 Juneau Sen. Jesse Kiehl on the floor of the Alaska Senate. (Photo by Greg Knight)

Juneau, Alaska (KINY) - With the unofficial results from statewide House and Senate primary elections rolling in, Juneau Sen. Jesse Kiehl, who ran unopposed this year, spoke to News of the North about the possibility of a coalition Senate.

"Primary elections are always a little tough," Kiehl said. "We certainly saw some regions of the state that historically don't vote in August [come out] in large numbers, and most folks did not go to the polls out in western Alaska. But I think we're going to see some very different choices in front of the voters in November. My hope is that that's going to mean Alaskans pick a legislature that looks a little more like them, and a little less like the extremes on the left or the right, especially when it comes to individual legislative seats ... so, I think I think we have prospects for a legislature that will have the ability to get some work done by working a little closer to the middle."

Kiehl explained the process of deciding who will be up for leadership in the 33rd Alaska Legislature, as it pertains to the Senate.

"Whatever the results are, we'll all talk with one another," Kiehl said. "We're on the phones now. We'll be on the phones then. And folks will get together, pick a place and meet and just chat about about the direction we think the Senate needs to go, and who is best equipped to have some of those leadership posts, who's best equipped to hold some of those gavels, and sort of help shape individual bills and the flow of legislation. There's a lot of philosophy into that, a lot of political values. There's also a lot personalities. You need people you can work with. So, I'm guardedly optimistic that we will have a coalition that's there just to work on the best outcomes for Alaska, rather than pushing one party's agenda or one party's advantage."

The first regular session of the 33rd Alaska Legislature is set to convene in January 2023.