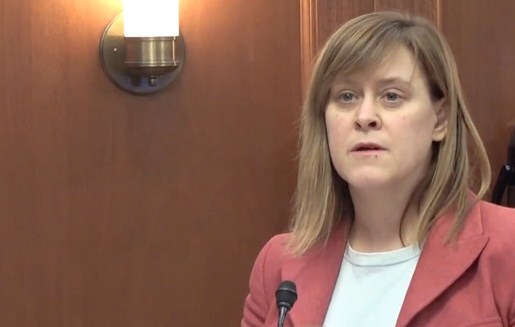 Juneau, Alaska (AP) - One of the most powerful Republicans in the Alaska Senate is bucking the Senate president's call to meet in Juneau on Monday, as legislative factions barrel toward trying to hold special sessions in two different cities, hundreds of miles apart.

Senate Majority Leader Mia Costello, in an opinion piece published by her hometown Anchorage Daily News, said Republican Gov. Mike Dunleavy issued a legitimate call for lawmakers to convene in Wasilla and she will heed that call.

"It doesn't matter how we feel about the governor's call, or Wasilla, or the governor himself. All that matters is that we follow the constitution and we follow the law," she wrote, adding: "I'll see you in Wasilla."

It's not clear how things will shake out. Dunleavy spokesman Matt Shuckerow said the governor hopes lawmakers go to Wasilla. If they don't, "we will cross that bridge when we get there," he said.

Costello did not respond to an interview request. Senate President Cathy Giessel, a fellow Anchorage Republican, said earlier Friday that there is "no question" lawmakers will convene the special session in Juneau. Giessel said she believed the Legislature is on solid footing with the plan, despite legal questions raised by Attorney General Kevin Clarkson, who has argued that Dunleavy can call lawmakers into special session anywhere he wants.

Dunleavy called on lawmakers to meet starting Monday in Wasilla, where he is from, saying a change in venue was needed after they failed to finish their work in Juneau, the capital, over five drawn-out months. Shuckerow said Dunleavy's office has heard from numerous lawmakers who plan to be in Wasilla, which is about 40 miles (64 kilometers) north of Anchorage.

Jessica Geary, executive director of the Legislative Affairs Agency, said the agency has made no preparations at Wasilla Middle School, Dunleavy's recommended venue, and instead followed the direction of legislative leadership.

Giessel and House Speaker Bryce Edgmon, a Dillingham independent, previously announced plans for lawmakers to meet in Juneau and hold committee hearings in Anchorage, citing in part the ability to use facilities designed for legislative proceedings.

Clarkson recently told reporters the state constitution does not give the Legislature power to determine where a special session called by the governor will occur and said state law allows a governor to call a special session anywhere.

"He could have picked Kotzebue or Bethel or Huslia or Mile 135 of the Sterling Highway, literally anywhere in the state," Clarkson said, ticking off rural or remote locations.

Senate Finance Committee Co-chair Sen. Bert Stedman scoffed at that. "We're not running a comedy show here, or reality TV," the Sitka Republican said. Juneau is the seat of government, and the legislature is a separate but equal branch of government, he said.

Giessel said she was certain she would have 14 members in Juneau. The Senate has 20 members. A message seeking comment from Edgmon was sent through the House majority press office.

The special session's sole agenda item is a spending bill authorizing this year's payout to residents from the Alaska Permanent Fund, a nest-egg fund seeded with oil money and grown through investments. Annual dividends traditionally have been paid with fund earnings, which lawmakers also began using last year to help pay government expenses amid an ongoing budget deficit, creating tension.

But that's not the only work the Legislature has yet to finish. Still unresolved, for example, is the state's infrastructure budget, the capital budget. Some legislators also are interested in revisiting the dividend formula, seeing the existing calculation as unsustainable. The formula has not been followed the last three years, resulting in reduced check sizes. Dunleavy, who took office in December, campaigned on paying a full dividend, which would cost about $1.9 billion and result in checks around $3,000 this year.

The dividend has been a major stumbling block. Dunleavy has said he thinks other budgetary issues will fall into place once the dividend is resolved.

When the Legislature convenes, it will have five days to decide whether to override any of Dunleavy's vetoes to the state operating budget.

University of Alaska President Jim Johnsen has described the $130 million Dunleavy vetoed from the system's budget as devastating. Other areas affected by vetoes include health and social service, early childhood and environmental programs and public broadcasting. Forty-five of the Legislature's 60 members must agree on an override, which lawmakers say is a high bar to attain.

Democratic Rep. Adam Wool of Fairbanks, a university city, said it will be a bad day if lawmakers fail to override the university cut in particular. "I think we're at a serious turning point. If we can't do it this year, then I don't know what it says about next year," he said.

Dunleavy has said he hopes to close the budget gap next year. The state has no statewide sales or personal income tax, and no new or increased state taxes were seriously considered this year.

Dunleavy did propose tax-collection changes that would benefit the state but that some local governments said would hurt them. Those failed to gain traction with lawmakers.