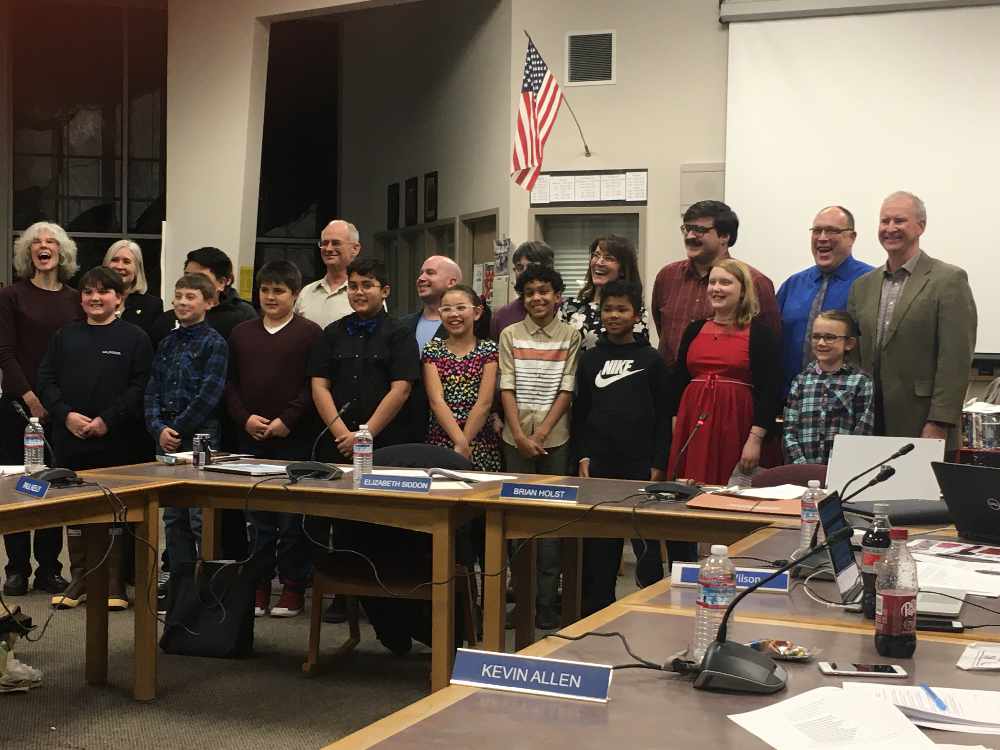 Glacier Valley Elementary kids pose with the Juneau School Board.

Juneau, Alaska (KINY) - The Juneau Board of Education approved a resolution to support HB 193, a bill to adopt the second verse of the Alaska Flag Song.

The song was adopted by the Territorial Legislature as the official song of the state in 1955.  The music was composed by Elinor Dusenbury and words to the first verse were written by Marie Drake.  Words to the second verse were later written by Carol Beery Davis, an Alaskan pioneer and poet laureate.  A group of students from Glacier Valley Elementary School helped to draft a bill to make the second verse of the Alaska Flag song official.

Various students from Glacier Valley Elementary School spoke to the board about the merits of the resolution and what it means to them.

William Fenumiai said it was an educational tool that students from other states should learn about.

Students said the song also taught them to strive to be better students and people.

In other actions, the Board approved a proclamation to honor Elizabeth Peratrovich Day on February 16.

The Aware Shelter talked about the impacts of the Girls On The Run after school program.  It is an anti-violence program.  It involves mentoring and learning positive skills and lessons.  The girls also take part in community service.  The kids have put together care packages for the homeless, held climate rallies, and other special events.  The program has been active in Juneau schools for over 10 years.

The Boys on the Run program emphasizes traditional tribal values and incorporates culture and language.  The development of a strong spirit, taking responsibility, and caring for others were some of the traits the boys learned.

Conflict resolution, appreciation of differences among people, and not being afraid to talk about their problems with others are some of the goals of the program.

The groups take part in a 5K race at the end of the program in a non-competitive atmosphere.

Dr. Bridget Weiss reported she is at a National Superintendent Certification meeting.

An anti-vaping campaign is underway at Juneau's secondary schools.  A panel of speakers will attend a school-wide assembly to discuss the risks of vaping at Juneau-Douglas High School on March 31.

February is School Board Recognition Month.