The collection from Wells Fargo. (Photo Courtesy of the Sealaska Heritage Institute Livestream.)

Juneau, Alaska (KINY) - Ancestral belongings were returned to Southeast Alaska in an emotional ceremony Thursday at Sealaska Heritage Institute's clan house in Juneau. The sacred objects, known as at.óow in Tlingit, included a mask and hat.

Repatriation is a new ceremony but embodies the traditional values, protocols, and sense of reciprocity of the Tlingit people.

Sealaska Heritage Institute President Rosita Kaahani Worl, talked about the origin and history of the ceremony.

"In 2017 Sealaska held a ceremony to welcome a Chilkat robe donated to SHI by Bruce and Gretchen Jacobson, at the behest of their daughter Sarah. It was a new ceremonial activity for us since we never alienated cultural objects, except in the rare case for liability payments," Worl said. "It was only during the colonial period that we begin to witness an outflow of our cultural objects."

The mask and hat were donated to Sealaska Heritage Institute by the family of I.S. “Lefty” Weissbrodt, an attorney who prosecuted Tlingit and Haida land claims beginning in the 1900s. The hat, made by master Tlingit artist Nathan Jackson, was given to Weissbrodt by Native people in appreciation of his work on their behalf. 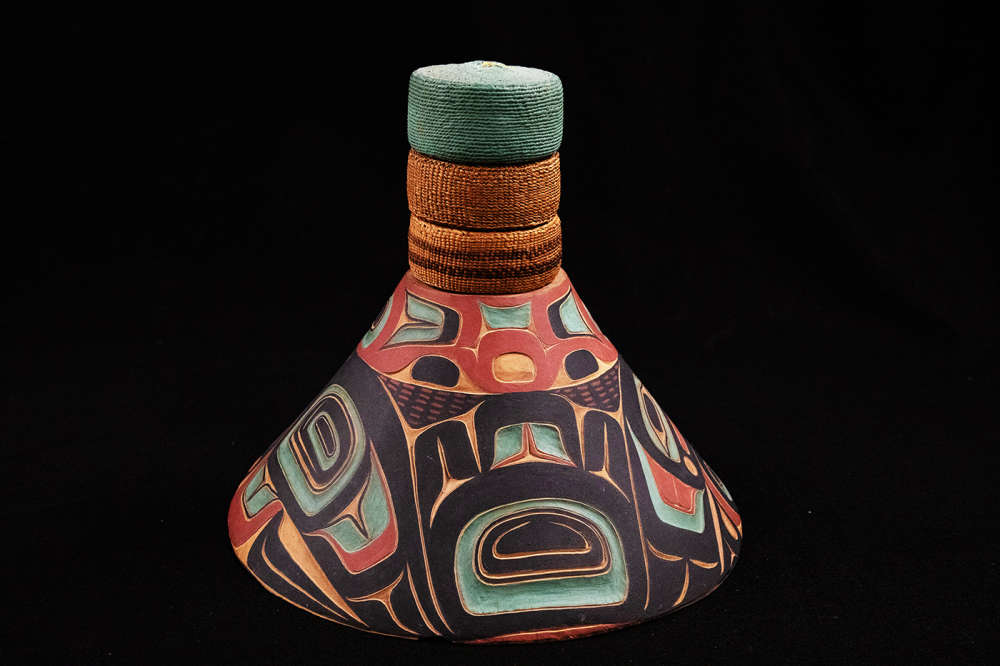 The mask and hat are known as at.nané, which refers to an iconic event or the visualization of an iconic event. When at.nané are presented at a ceremony, and the history of the event is given in the presence of the opposite side, it is transformed into at.óow, or sacred objects.

The at.óow also includes rattles, an octopus bag, two painted spruce-root hats, a shaman’s apron, a ceremonial collar, a dagger, two button blankets, two maskettes, a tunic, a Chilkat robe, a helmet, and an amulet. The collection was donated to Sealaska Heritage Institute by Wells Fargo, which cared for the items in its Wells Fargo Museum in Anchorage.

To the indigenous peoples of Southeast Alaska these belongings are more than just art, but instead are seen as family members, with lives and spirits of their own. During the ceremony, some of the belongings were danced by members of both Raven and Eagle moieties.

Joey Yeilnaawu Zuboff, compared the return of the belongings to bringing relatives home off life support.

"We have a saying in Angoon, that when we go to see our ancestor's artifacts, we look at them as if they are on, how you say, life support. We have to have gloves on and masks to touch them," Zuboff paused. "So these now are going to be able to breathe, will not be on life support, because we're going to bring them back to life as much as we can."

In accordance with tradition, every representative was given time to speak, and both clans and moieties were carefully balanced with respect.

The hat and the mask will be available at Sealaska Heritage Institute for study by students.