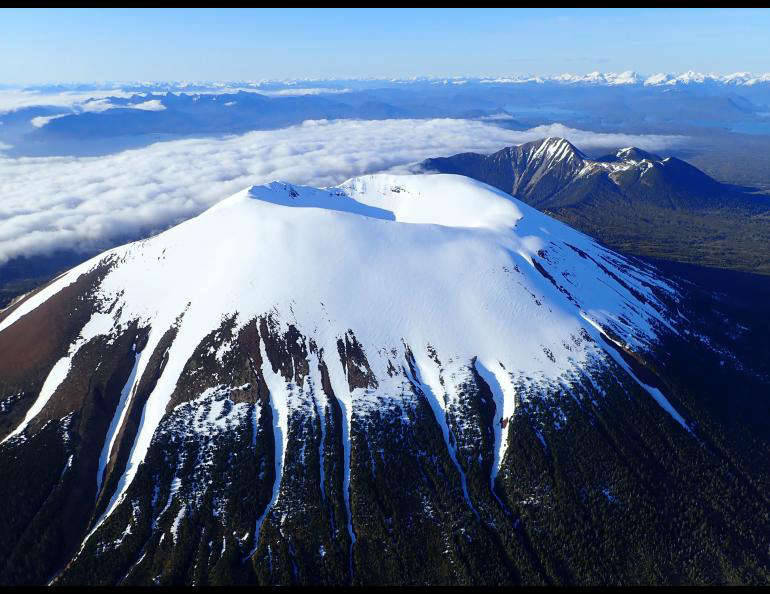 Mount Edgecumbe rises in the foreground with Crater Ridge behind and to the north in May 2022. (Photo by Max Kaufman)

Mount Edgecumbe, at 3,200 feet, is on Kruzof Island on the west side of Sitka Sound.

Edgecumbe is 15 miles west of Sitka.

It's part of the Mount Edgecumbe Volcanic Field, which includes the domes and crater of Crater Ridge.

"What we've done is play data from tasks of such analysis. We were able to analyze large volumes of satellite data quite rapidly in cloud computing environment that was developed by the Alaska Satellite Facility here at UAF. That allowed us to analyze data that usually would have taken to several weeks to months within a few days."

The new research approach leads to earlier detection of volcanic unrest in Alaska.

Grapenthin confirmed this new satellite research method will be applied towards other Alaska volcanoes.

"Edgecumbe was really a test case because we had just set up the analysis to these approaches. We've been expanding this now to move towards monitoring of the rest of the Alaska volcanoes in a similar way. It's routine satellite based, deformation analysis along the Aleutian Arc and Cook Inlet volcanoes. We're pretty close to doing that on a weekly basis now for all of these volcanoes."

Grapenthin explained what their research has found.

"What we found is that starting in about August 2018, fairly constant rates over the last three and a half years. We related that to magma motion under Edgecumbe where we believe that magma is migrating upwards. Starting at about from a reservoir at about 20 kilometers depth to shallower depth than about 10 kilometers."

He continued on the magma's current effects.

"The ground uplifts started in about August 2018 and has been constant at about seven or so centimeters per year. The areas that deform the most. What we believe is happening is that the earthquakes, retrospective analysis shows them starting in about summer of 2019; the earthquakes are related to stress releases in the crust as it is being pushed upwards by by the magma. So, small fractures in the ground that are slipping because of this slight ballooning effect that the magma is causing. The earthquakes were fairly noticeable starting in about January of 2020. There was a sequence of large earthquakes that initiated with the magnitude three earthquake in the area. That sequence kind of subsided over a few weeks. And then this year in April, we had another sequence of larger earthquakes that were detected by the seismic network. We put that out to monitor for these kind of larger tectonic earthquakes that caught our attention."

Grapenthin emphasized an eruption is not imminent.

"The last three and a half years we've had this constant deformation signal. We haven't detected any changes to that. So what we know from our analysis, magma is still accumulating at about 10 kilometers. Seismic activity that we saw in early April of this year has subsided. Keeping an eye on the volcano we have now ground based instrumentation installed, they have seismometer closer to the volcano. A GPS station to measure deformation too. We would expect to see changes in the earthquake rate, the earth characteristics and also the way the volcanoes deforming before any eruption will take place."

He said that the last eruption is estimated to be 800 to 900 years ago.

"There's oral history from local T'lingit travelers that visited the area by canoe to explore. They reported as was handed down by Herman Kitka, a mountain that was smoking and there were fires that came from the mountains. They went to investigate. That is the most recent report of activity that we have for Mount Edgecumbe. If we hear an account like that we think about that as perhaps some small scale fire fountaining type eruption. Not the new major explosive eruption that we often think of when we hear about a volcano erupting."

"It was a great collaboration between people here locally. At the Geophysical Institute, colleagues at the Satellite Alaska Satellite Facility, Alaska Volcano Observatory collaborators at GGS, the Division of Geophysical and Geological Services, the State Survey and the USGS. It was excellent to collaborate with the Sitka Sound Science Center."