Report: State says recall application will be reviewed within 60 days 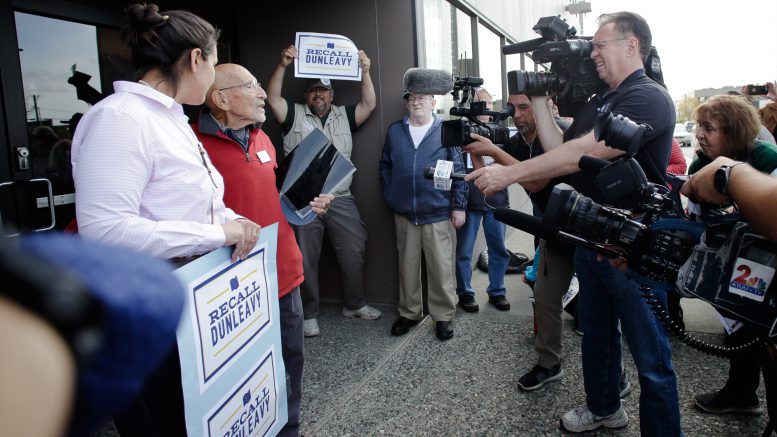 Vic Fischer and Meda DeWitt talk with the press shortly after submitting the application and signatures on Thursday, Sept. 5. (Photo by Matt Buxton)

Anchorage, Alaska (KINY) - The Alaska Division of Elections and Attorney General Kevin Clarkson say they plan to complete the review of the Recall Dunleavy application within the next 60 days.

According to The Midnight Sun news website, Clarkson says they will give the application the same treatment as voter initiatives.

The statement is noteworthy because state law contains no timeline for reviewing recall petitions, which has raised concerns that the state may drag its heels on the effort to remove Gov. Michael J. Dunleavy from office. The Recall Dunleavy group has requested a 30-day review.

“I see no need to treat this application any differently than other election applications,” Clarkson said in a prepared statement. “I am here to provide legal advice and defend and uphold the state and federal constitutions. The Department of Law will advise the Division of Elections, in the same manner, it would any other recall. And 60 days will give us adequate time to do a thorough legal review and provide our legal recommendation to the director.”

Backers of the recall effort submitted more than 49,000 signatures on Thursday along with an application that accuses Dunleavy of neglect of duties, incompetence, and lack of fitness, which are three of the four official grounds for a recall. The application does not accuse Dunleavy of corruption.

The Division of Elections will need to ensure that at least 28,501 of the 49,000 signatures are from eligible voters as part of the review. Whether or not the application’s 200-word statement meets the legal grounds for a recall will largely be up to Clarkson and the Department of Law, which provide legal input on initiatives and recall petitions.

Backers of the initiative said on Thursday that they’re prepared to take the issue to court if Clarkson and the Division of Elections reject the application. Organizers announced that trial attorneys Jeff Feldman and Susan Orlansky will be part of the group’s legal team, along with former Attorney General Jahna Lindemuth and former Gov. Bill Walker’s chief of staff Scott Kendall, who’s currently serving as the effort’s general counsel.

“If the director denies our application, we will take this to court and we will win,” said Aaron Welterlen, a Fairbanks organizer for the recall effort at an event before the group submitted its signatures. “We will win.”

If they give us a hard time, we’ll see them in superior court,” said campaign co-chair Vic Fischer said after submitting the application. “We will be either cleared by the Division of Elections or by the court to proceed with getting the next 70-plus thousand signatures, which judging by how it’s gone so far will not be a problem.”