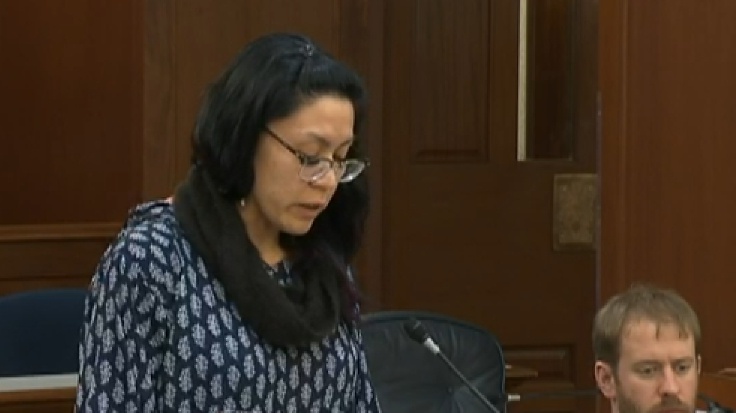 Rep. Tiffany Zulkosky reads a letter on the floor of the House on Wednesday.

Juneau, Alaska (KINY) - As cases of COVID-19 continue to climb in Alaska, there’s been growing calls for Gov. Mike Dunleavy to issue a statewide shelter-in-place order

According to the Midnight Sun news website, the request comes as several local communities grapple with their limited powers to slow the virus’ spread.

It’s a call that he has, so far, refused.

The risk is particularly acute for rural Alaska communities that sit at the end of a long and expensive supply line with a limited health care system that typically relies on medevacs to get people to the critical care they need. For many rural Alaska legislators, the COVID-19 pandemic has already raised grim memories of the 1918 flu pandemic that “annihilated” several rural communities.

“We request that you take immediate action and issue a statewide ‘shelter in place’ order, compelling Alaskans to shelter in their places of residence,” they wrote. “Across our state, and particularly in rural parts of Alaska, health care infrastructure is limited. This makes constraining community spread essential to ensuring that when someone becomes ill, rural hospitals have enough capacity to provide life-saving care if necessary.”

Some villages and communities have initiated travel bans, taking the drastic action that some villages took more than a century ago of closing their communities to outsiders. But the law leaves many communities, particularly hub communities, without the power to enforce such restrictions on movement.

In 1918, villages enforced the travel bans with rifles.

Today, many communities in rural and urban Alaska lack the legal power to order people to obey a shelter-in-place order. It’s a problem for the hub community of Bethel, one of several second-class cities and boroughs that doesn’t have health powers.

“I don’t see anything wrong with encouraging and recommending that stuff, but I don’t think there’s police power to enforce that. … We don’t have legislatively delegated health powers,” Libby Bakalar, the Bethel city attorney, told KYUK. “What would be the best thing to happen here is if we had a statewide order come down that yes, all businesses have to close, everyone has to hunker down, shelter in place. And that has to come down from the governor’s level for us to really be able to validly enact something like that.”

Fairbanks-area health officials this week rebuked Gov. Dunleavy for refusing to issue a state-wide order. During an update on Tuesday, Dunleavy rejected calls for an order because he worried it would always require individuals to stay home. The Fairbanks officials said his interpretation of the rule was wrong.

“You can go outside. You can walk your dog. You can walk with a friend as long as you maintain social distance,” Dr. Mishelle Nance, a pediatrician at Tanana Valley Clinic, told the Fairbanks Daily News-Miner. “It’s not a sentence that you have to stay in your house and isolated. You can go outside if you are able to maintain that social distance. And in Alaska, we are easily able to maintain that distance.”

Fairbanks also faces a similar problem that’s complicated by the different overlapping governments. The Fairbanks North Star Borough lacks the power to enforce a shelter-in-place order while the city of Fairbanks can issue such an order.

Anchorage issued a hunker down order last week, specifically allowing people to go out and recreate as long as they’re maintaining safe distances with others.

In the absence of a statewide order, the group of rural legislators asked to at least temporarily empower rural communities to enforce a shelter-in-place order.

“If you are unwilling to issue a statewide shelter in place order, we request that you empower local community leadership with tools to enforce existing tribal and municipal governments’ efforts to slow the spread of this virus,” they wrote. “In the interest of Alaskans, we request that in response to this public health crisis, the State honor municipal and tribal advisories, mandates and guidance related to COVID-19 exposure and prevention, and empower local governments with the legal backing to take care of their communities.”