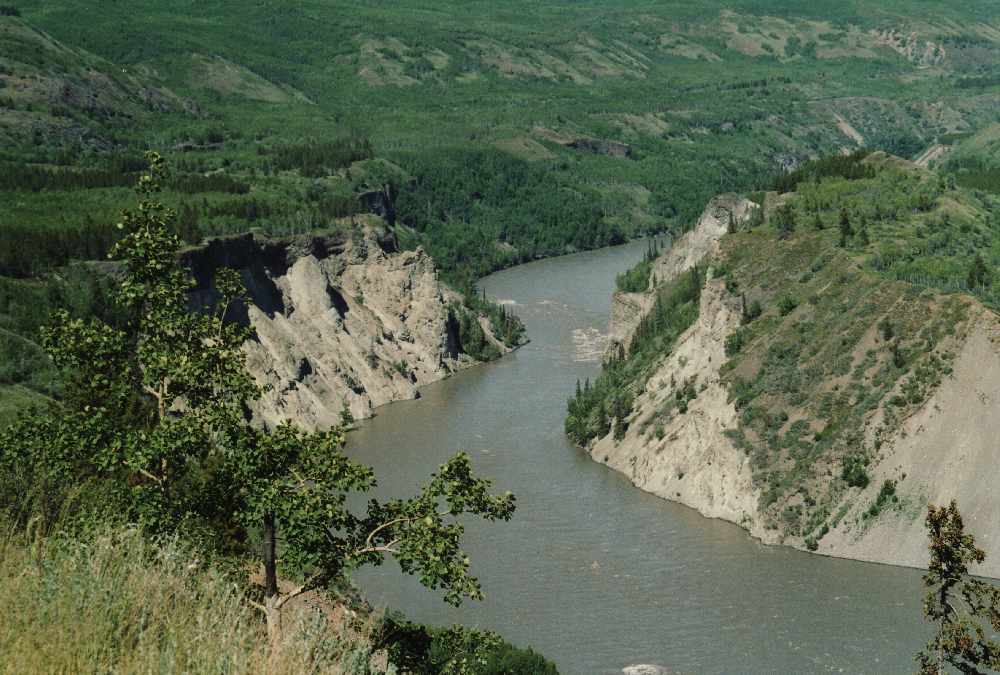 An aerial view of the Stikine River canyon.

Haines, Alaska (KINY) - Two of the nation’s 10 most endangered rivers are in Southeast Alaska. That’s according to American Rivers, a conservation group opposed to mining and energy development in wilderness areas.

According to KHNS Radio, Kimberly Strong, the president of the Chilkat Indian Village of Klukwan, said It sits on the Chilkat River, recently named the 6th most endangered river in the nation.

Klukwan is one of the longest continually inhabited places in North America. The name means “eternal city.” The Tlingit have lived on this river for thousands of years feeding off the rich salmon runs. But Strong says mining upstream could pose an existential threat to all that.

“This is a food sovereignty issue,” she said. “It’s having access to the natural resources that are around us.”

Strong says in Klukwan, the Chilkat is more than a river. It’s the history of a people and their food source. That’s why she’s fighting for the resource.

American Rivers is a Washington D.C.-based advocacy group that has been releasing the Most Endangered Rivers Report for over three decades. Communications Director Amy Kober says the purpose of their annual endangered rivers list is to raise national awareness about threatened rivers.

She says people have taken action on behalf of rivers they’ve highlighted in the past. Attention generated by the report helped spare the Hoback River in Wyoming from fracking, and spurred cleanup actions on the St. Lawrence River in New York and Canada.

The Chilkat River is one of two Southeast Alaska rivers listed in the 2019 report. The Stikine River which flows out of British Columbia and empties near Wrangell is 10th.

Both for the same reason: mining development.

On the Chilkat, Constantine Metals Resources is a Canadian company with exploratory permits for a potential copper-zinc mine in the upper watershed. The company says any future operation would be safe and bring good jobs to the region. A message left with Constantine’s Haines office wasn’t immediately returned.

Not everyone is convinced. Alaska Clean Water Advocacy’s Gershon Cohen lives in Haines. He says that Constantine’s Palmer Project would store mine waste that could threaten the ecology.

“There is just too much history of large mines polluting public waters and destroying fishery resources, that we felt this can’t be ignored,” he said.

“If you look at the data, there is more than one large mine failure somewhere in the world every single year. For us to believe we are somehow going to be immune from that is naive.”

The Chilkat has runs of all five salmon species that are caught by sport anglers for subsistence and commercial use. It also flows through the Chilkat Bald Eagle Preserve, where those fish feed one of the largest gatherings of bald eagles in the world every fall.

American Rivers says the Stikine River faces similar threats. Like the Chilkat River, the Stikine is in an active seismic zone—it flows over the Queen Charlotte Fairweather fault. There’s a working mine at its headwaters over the border. The Red Chris Mine is operated by Imperial Metals, the same company responsible for a massive tailings dam failure at Mount Polley Mine in 2014.

Transboundary mining has long been a source of contention between Alaska and British Columbia. Critics say Alaska stands to receive pollution downstream but none of the economic gains from the mine.

The Southeast Alaska Indigenous Transboundary Commission accuses the Province of British Columbia of violation g a century-old Boundary Waters treaty that prohibits the United States and Canada from polluting each other’s waters.

Back on the banks of the Chilkat, Kimberly Strong is watching the moon rise. A crane flies low over the water.

“To hear that other people are now raising up and recognizing the threats that a mine could have on our life here in the Valley is heartwarming and really kind of scary. That it is being threatened. That experts believe its being threatened is something to listen to,” she said.

Klukwan has about 100 residents. She says she’s glad Chilkat is recognized nationally as a treasure worth protecting. For her, it’s not just a cause—it’s home.