Repatriation of artifacts to Kake 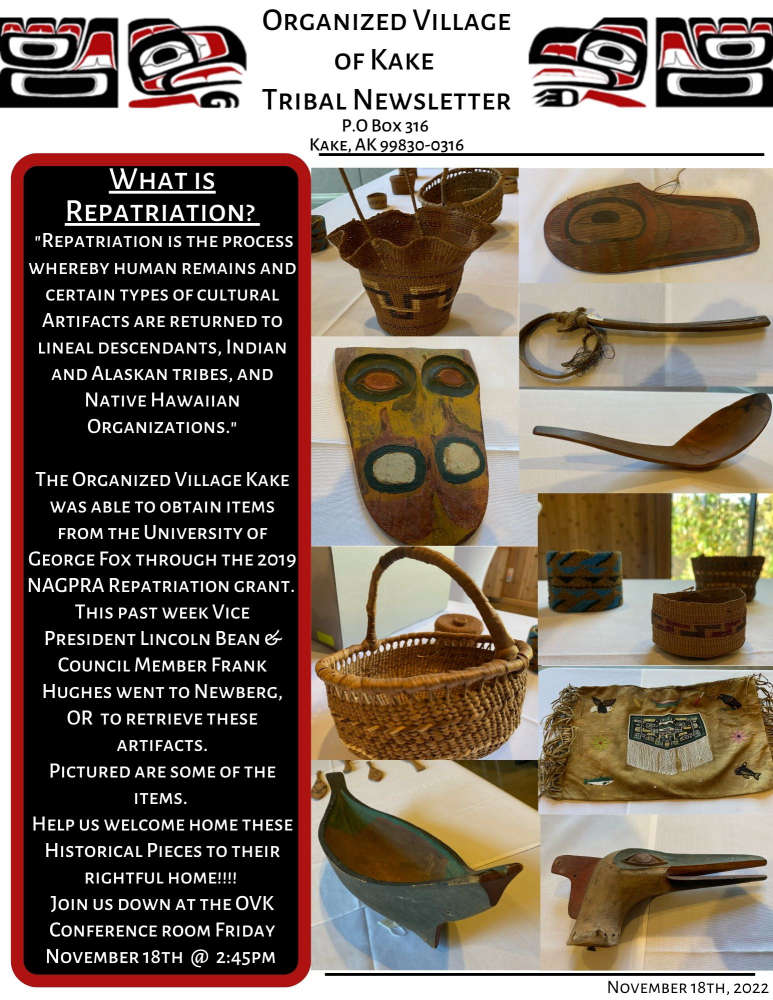 Kake, Alaska (KINY) - Frank Hughes, and Lincoln Bean Sr., both members of the organized village of Kake's Council, are part of a repatriation of Kake artifacts.

Frank Hughes said in 2017 he was a Native American Graves Protection and Repatriation Coordinator. Currently, he's a council member with the Organized Village of Kake.

Hughes spoke about the process of retrieving the artifacts.

"We were in Newberg, Oregon at George Fox University. We're repatriating artifacts that were in Kake. As far as we know, Quakers were there in the 1880s and 1920s. They took artifacts from Kake and brought them here to Newberg and we're repatriating these items. Several of them are Tsaagweidi, the killer whale clan from Kake. We have many artifacts that are Kaachadi, the Raven side from Kake also. Like paddles, some medicine man rattles. We have several baskets, woven baskets that are both spruce root and yellow cedar."

"It will be exciting to see them uncovered and bringing them back to Alaska with the artifacts. Probably about a week or so they will decide on where the artifacts will go."

Hughes said they haven't decided which Alaska museum the artifacts will be placed in yet.

The artifacts date back to the 1700s, some including documentation tags. They left Kake in 1880. Hughes went into detail on the artifacts recovered.

"They're woven like woven baskets, both spruce root, red cedar bark. There's a replica of a canoe. We have a ladle. We don't know exactly what it is. That's a major part of it is a lot of small, woven, real finely woven spruce root and red cedar bark baskets. There's Thunderbird stuff from Kake, a headdress, and several paddles. These artifacts were last in Kake in the previous pandemic, which would have been the Spanish flu, and TB was going into the Kake area. One significant thing these artifacts have seen is the previous pandemic."

Hughes said the artifacts have personal significance to his wife's family.

"The artifacts go back to my wife's side of the family, the Kaachadi side of family, they're on the Raven side. My wife is a Raven Kaachadi so it would be her side."