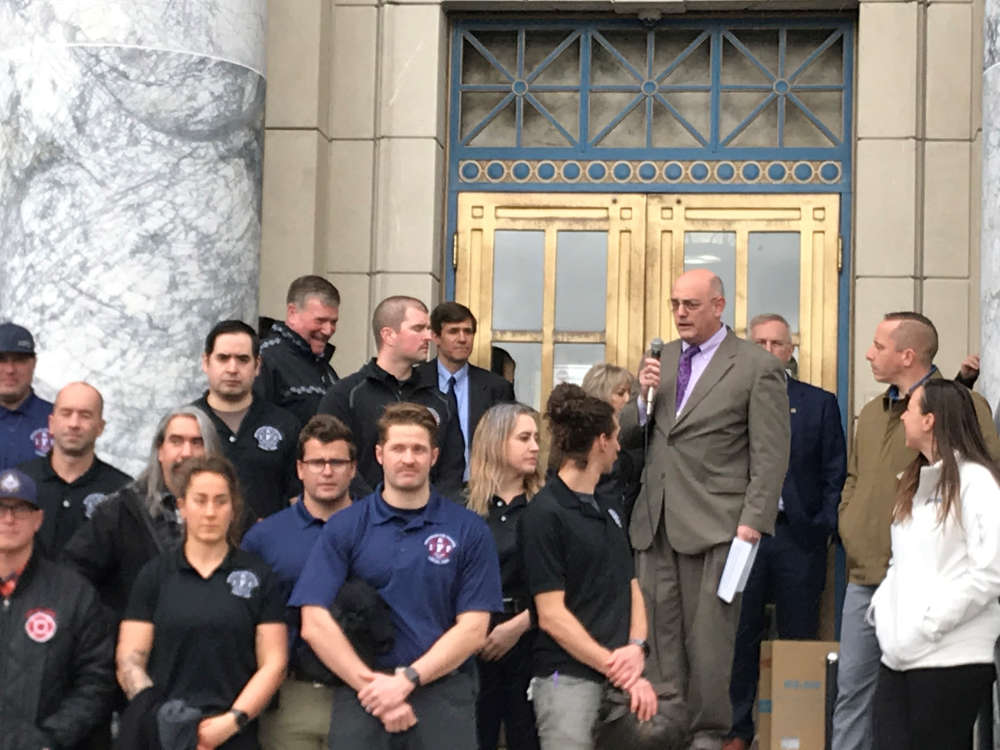 Juneau, Alaska (KINY) - Members of the Alaska Professional Fire Fighters Association rallied on the steps of the state Capitol Thursday to urge passage of House Bill 55.

The bill aims to create a new hybrid retirement plan option for state and municipal peace officers and firefighters under the Alaska Public Employees’ Retirement System.

Alaska ended the defined benefit plan in 2006 after it was discovered that those accounts were too underfunded to meet anticipated retiree obligations.

The lead sponsor of the bill, Anchorage Representative Andy Josephson, said that since these plans were eliminated, one of Alaska’s greatest public safety challenges has become employee retention and recruitment.

President of the Fire Fighters Association, Paul Miranda, said the state is losing money and valuable experience because it can no longer compete with what other agencies are offering in the lower 48.

"We don't need to look very far to see Washington state one of our biggest competitors for public safety employees who has a wildly successful retirement plan that continues to be overfunded year after year and we are losing our police officers, firefighters to Washington State and others."

The proposed option would allow future peace officers and firefighters under the retirement system and current ones under the Tier IV plan to join the defined benefit plan.

"It's been mentioned and it's accurate that Alaska is the only state in our country that does not offer a defined benefit retirement plan for its public safety employees. House Bill 55 is a very reasonable solution. It's modeled after the most successful plans in the country."

Former State Representative, Chuck Kopp, was asked why it is a critical moment for the legislation.

"Our recruitment and retention crisis for public safety exceeds 6% in some agencies, these are positions that agencies are spending more than $150,000 each on in their first year to train up and get all their certifications, so they can go out and work on their own, and then once they're completely certified and ready to go, they're leaving Alaska as a highly qualified, highly desirable public safety professional for out of state agencies who are paying a good wage, and frankly, it comes down to a retirement system that is something far more secure for that public safety officer and their families to look forward to," said Kopp. "It's been stuck in the Senate in one committee now for months, in an apparent attempt to kill the bill, and we know that the rest of the Senate more than welcomes it being moved out and being vetted by the Senate Finance Committee. So we need the Chair of the Senate Labor and Commerce Committee to do the right thing, move the bill and allow the next committee referral to do its diligence."

HB 55 had passed the house last year in May. In the Senate, it was referred to the Labor and Commerce Committee and has not been taken up since January.