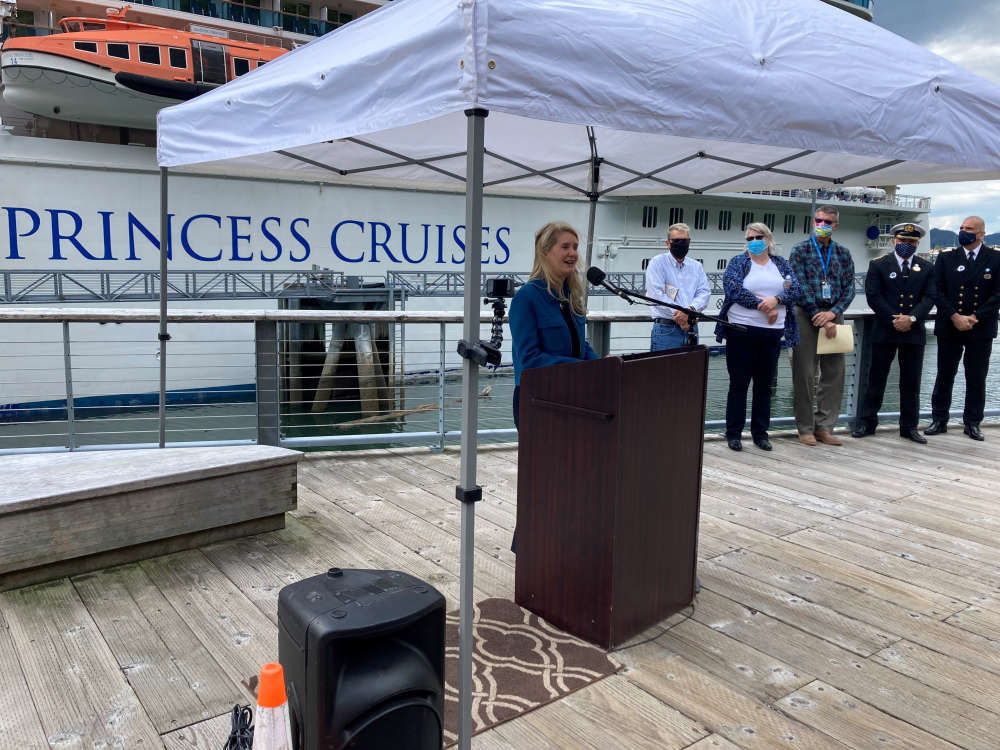 Juneau, Alaska (KINY) - The Shore power system constructed in 2001 was celebrated at the Franklin Dock Sea Walk after 20 years of Princess Cruises “plugging in” to the City and Borough's electrical grid.

Princess Cruises was joined by CBJ and AELP Tuesday to mark the 20th Anniversary of Shore power in Juneau. Ships connect to the local surplus hydroelectric power and turn off their diesel engines, which in turn reduces the ship's air emissions and carbon footprint.

Every dollar spent by the cruise line for buying electrical energy in the community is used to offset diesel expenses. Extra funds are returned to residents and businesses of Juneau in the form of rebates on electricity bills.

The shore power equipment includes a uniquely designed transformer and system of cables. The electricity runs services on the vessels during day long calls. CBJ City Manager Rorie Watt previously had worked as the Director of Engineering and Public Works, he was asked what stood out to him about the electrical system.

"What's really kind of neat about it is we have such massive tides, so it's got to be a system that can accommodate a 1000 foot ship riding up and down 25 feet vertically in the water. It's got to be a system that when the ship comes in, we don't have brownouts or dimming of power on shore side, they don't have it on their side," Watt said. "When you talk to the electrical engineers, all the complexity in the logic and the control panels, like slowly ramping power up and down. It's really complicated, I think the public just sort of thinks of it like an extension cord but it's really a technically complex situation and I find that really interesting, as a former engineer."

"This was a good bet. It's been a good bet for the community and the amount of money that has come back to AELP that offsets local rates."

AELP President and General Manager Connie Hulbert, was asked about the amount of power the ships take in.

"Over the course of a season the princess ships will take about 6 million kilowatt-hours a year, over the 20 years that has added up to over $8 million," Hulbert said. "When we first started out our arrangement with Princess, we didn't have the lake Dorothy project online and our surplus amount of energy were very minimal, and so really they're using more now per year than they were previously so that financial benefit will accrue faster going forward."

"This effort here paves the way for shore power initiatives throughout the rest of the world, and today, every single Princess ship is equipped to support shore power. We plugged in all up and down the West Coast, including Seattle, Vancouver, San Diego, San Francisco, Los Angeles. We also plug in in New York and as far away as Shanghai and Norway, as many of those cities and communities have observed what has happened here and taken it as a best practice to help protect their communities."

The milestone was marked by the cruise line with their ship, Majestic Princess, making its maiden call and plugging into the Juneau electrical grid.