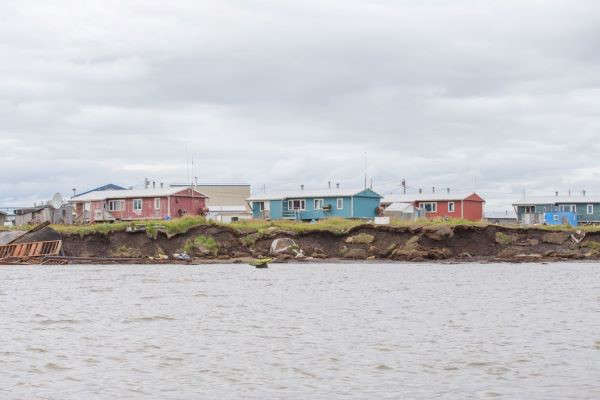 Storm-driven erosion on the Ninglik River that was creeping towards Newtok has caused the southwest Alaska community to relocate nine miles downriver to Mertarvik. (Photo credit ANTHC)

According to a press release, the project, “Expanding and Connecting Tribal-Led Climate Change Capacity to Serve Indigenous Community Needs in Alaska,” will establish a director of Tribal climate change initiatives position at ANTHC to leverage statewide relationships with Tribes.

"The Department of Commerce takes seriously its responsibility to engage with Tribal partners, and this innovative pilot project is an example of this commitment," said Deputy Secretary of Commerce Don Graves. "Bringing together NOAA's climate data and tools with the equity, health and service delivery expertise of ANTHC will help ensure Alaska Native communities have the resources to make informed decisions in the face of climate risks."

The project was developed in response to feedback received during a 2021 climate and equity roundtable.

Participants focused on climate equity (the concept of ensuring that communities that bear unequal burdens created by climate change have the resources needed to build resilience and adapt to change), community health and well-being and barriers Alaska Native communities face in accessing needed resources.

Addressing environmental threats that are worsening with climate change, including food security, extreme flooding and erosion and melting permafrost were identified as high priorities.