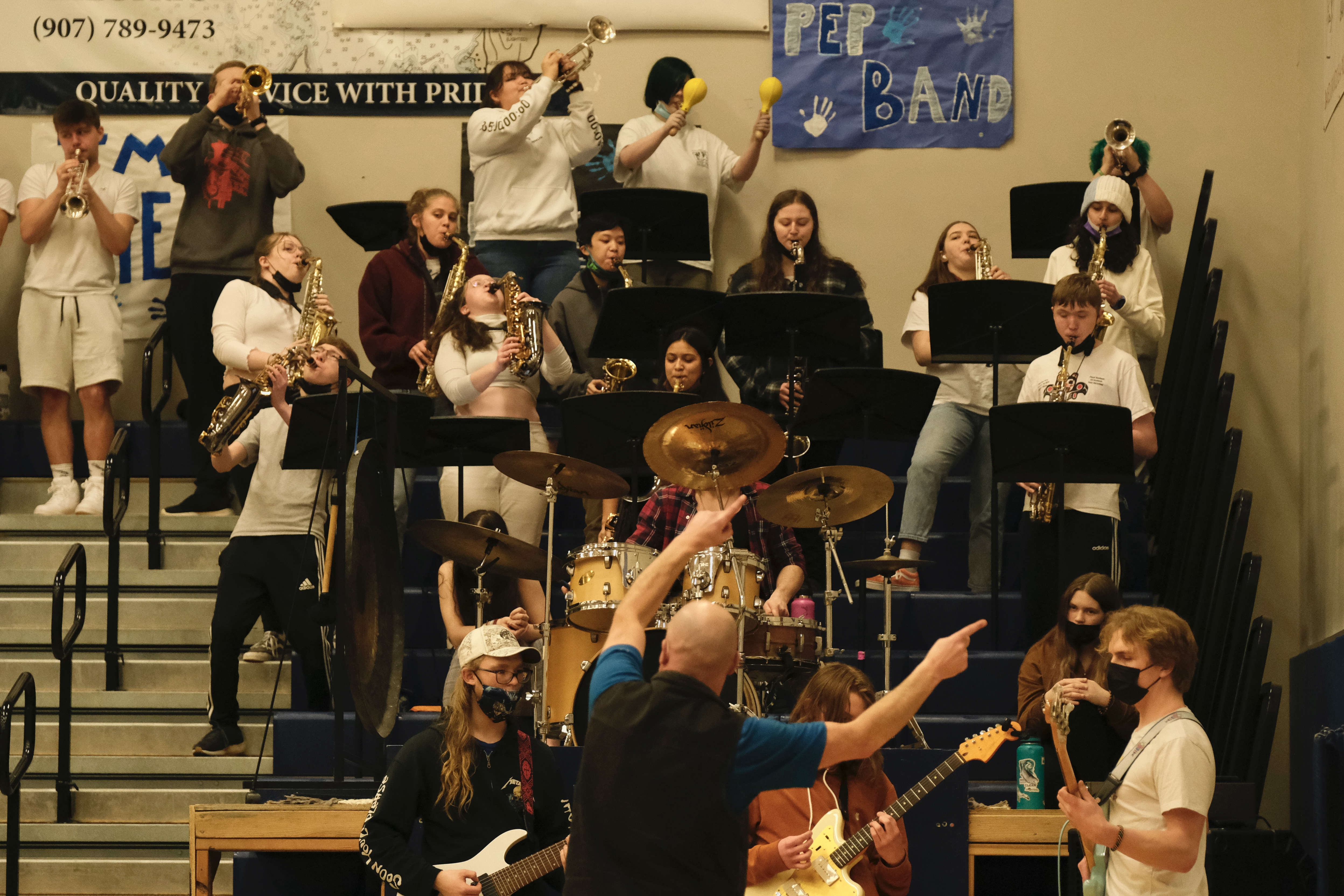 Juneau, Alaska (KINY) - It takes something special to supplement a high caliber activity without taking away from that activity and that challenge has been met every basketball season by the pep bands of Thunder Mountain High School and Juneau-Douglas High School: Yadaa.at Kalé.

“I think the pep band is really a collaboration between the pep bands, the dance teams, the cheer leaders and the basketball teams,” Thunder Mountain music director Brian Van Kirk said. “A lot of times people feel like they are going to a basketball game but it is important to remember there is so much more going on and I really try to highlight that. I really try to highlight some of the things we do and create entertainment in a different way but at the same event.”

Juneau-Douglas High School: Yadaa.at Kalé music director Amy Bibb said the Crimson Bears pep band “tries to make the best sound that we can. We try to get the crowd excited. We are there because we love to play the music.”

Like other activities, music doesn’t start and end at a certain date.

“We started practicing at the beginning of the year,” Bibb said. “We call it preseason pep band. We try to get all the new kids learning the music. The kids have played the same songs for four years and they still love doing it.”

For pep bands, basketball games are not just sports games.

“There is a lot more going on in side of that,” Van Kirk said. “It’s a collaborative effort to put on a show.”

Pep bands do so without taking away from the games.

“It really helps our students get outside of the box of really trying to focus on performing newer music,” Van Kirk said. “But the pep band is almost 100% student led.”

Van Kirk creates some structure but the captains - this year Cael Brown and Devin Moorehead - take the initiative after learning some of the music technology from him. The majority of the songs performed are student created and arranged.

“It is actually a testament to our student body and our previous student bodies,” Van Kirk said. “Those are all arrangements from TM students from decades past.”

JDHS also has traditions in place and their captains _ this year Jack Marx and Adrian Whitney - work with Bibb to learn how to run the band.

“And then I pull away as they become capable,” Bibb said. “We have a set play list but what I try to do is keep stuff in the folders that we can play. Every year we vote… the captains decide on how we pick new music… We try to have four new songs every year. The thing is, new songs don’t always catch on. The kids like the old songs, it’s hilarious. We try to get input from the basketball teams, from the student body in general, and then sometimes we buy something and we don’t like it and so we don’t play it.”

Sometimes songs just don’t take off, so even a band director might have to pull her favorite.

“It is not always what I like,” Bibb said. “If the kids like it then it is more likely they are going to sound good. If they sound good, the crowd will enjoy it.”

Bibb noted that pep band is important for music students.

The TMHS gymnasium is known around southeast Alaska as “The Thunderdome” due to their pep band’s reputation for loud and boisterous performances coming from a large quarter of the stands across from the home bench.

The JDHS gymnasium also has a reputation for home court musical advantages and their location above the visitor’s basket at the end of games can be awe inspiring or fear inducing, depending on what color jersey is looking up from the free-throw line below.

One thing for certain is that both high schools pulse with the beat of their pep bands.

“The cross-town games are the big games,” Van Kirk said. “And regions. Region V and that cross-town rivalry with JDHS. Just the atmosphere when you have two Juneau teams in the gym at the same time the public really shows up. The more people that we have, the more excitement we are able to bring. We electrify, we amplify, we bring that air of excitement… that edge into the gym. We’re able to capitalize on timeouts and keep things moving with different rhythms and different times… I have different songs that we program at different points and times of the game to emphasize the emotions that are going on the court… It’s a delicate dance, back and forth, with paying attention on what’s happening on the floor, how close the score is, where we are in the game, and then picking the appropriate music to support our home team…”

Bibb said the regional tournament, at Ketchikan this year, is “Just a huge pep band intensive thing. It's just like basketball all day long. But we play a few games back-to-back and that is always just exhausting. But also we play over the top better than we have been playing. And people go crazy cheering, the crowd is so loud and the bands are so loud and then they do a mass pep band thing and the kids just get super excited.”

The pep bands are their own thing, but at the same time, just a piece of the bigger puzzle.

The Thunder Mountain Falcons boys and girls basketball teams will be hosting Juneau-Douglas on Feb. 4-5. Unfortunately, many members of both pep bands will be attending the Sitka Jazz Festival at that time, joining in clinics and workshops with visiting professional artists and educators.

- listen to the complete interviews with music directors Brian Van Kirk and Amy Bibb at kinyradio.com. Click the On Demand tab and click on Alaska/Juneau Sports with Klas Stolpe - 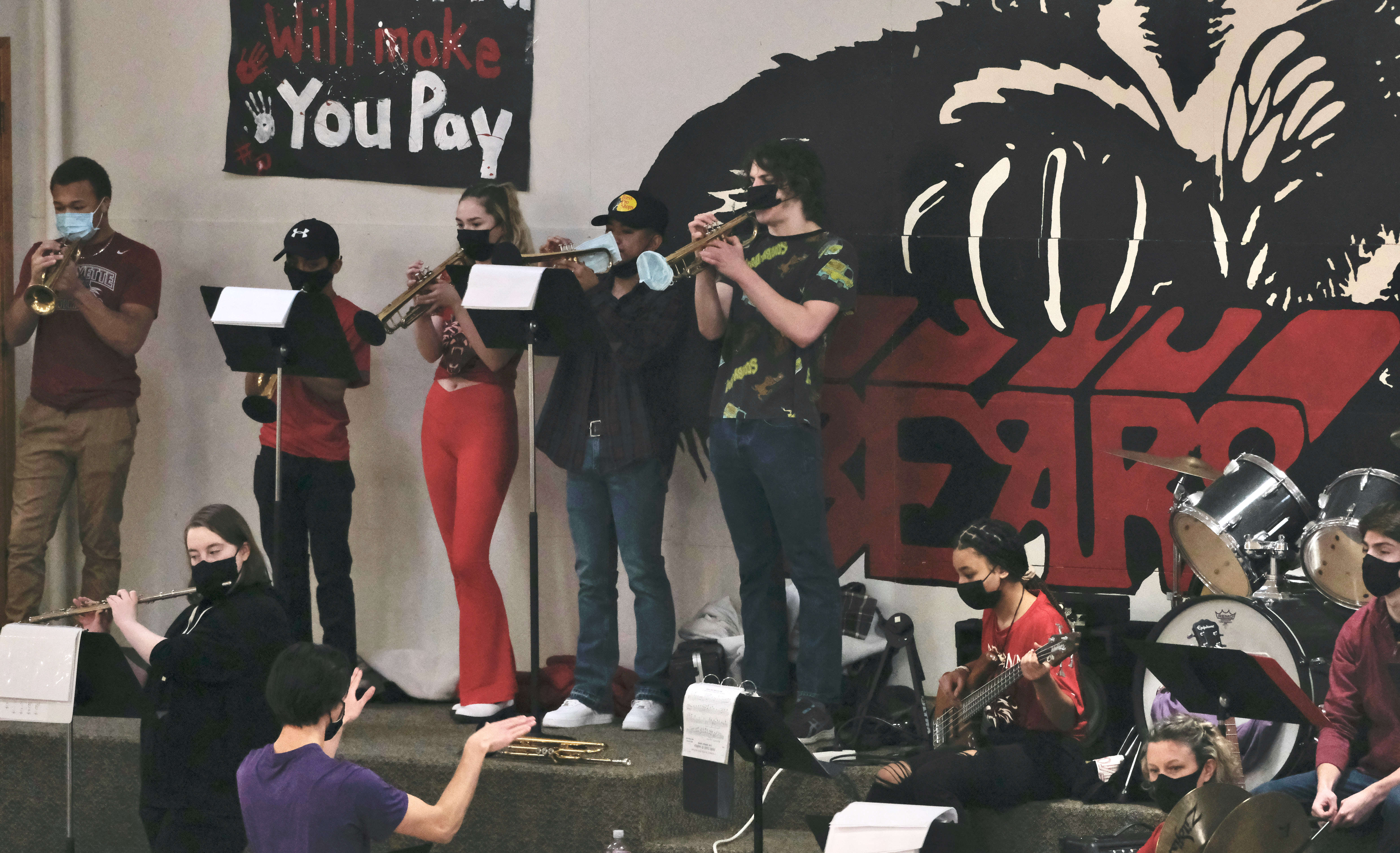