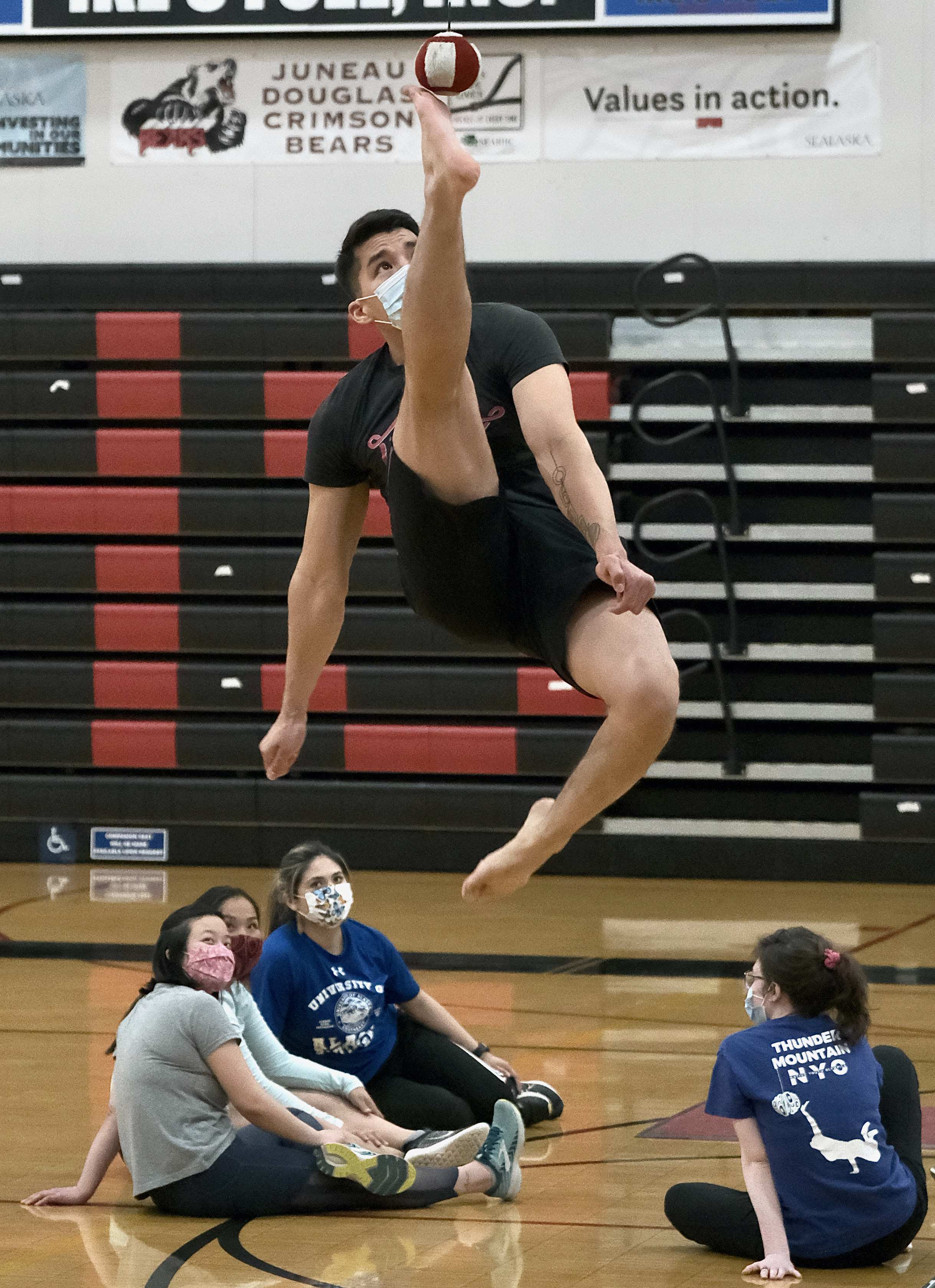 Juneau Native Youth Olympics coach Kyle Worl said the games are generally held each spring and normally feature teams from across the region and state and have even included teams from Canada and Arizona.

“The games are slimmed down this year and focused on more Southeast teams split into northern and southern events,” said Worl, a coordinator for the northern event in Juneau and for the southern event in Ketchikan, which has been rescheduled to May 22-23 due to a recent coronavirus concern there. “Safety is our biggest priority. We are able to invite teams with high vaccination rates within their community and low COVID risk status so some athletes from a few different areas could come together. We feel we can have a safe event with our mitigations in place.”

The public, however, is not allowed to attend, according to Sealaska Heritage Institute. Only athletes, coaches, officials and organizational staff will be allowed in the venue and will be subject to a COVID mitigation plan that involves testing each athlete and event participant, wearing masks and cleaning by a sanitation crew.

Roughly 40 athletes are expected in each of 10 events that test skills of strength, agility, balance, endurance and focus.

TMHS junior Ezra Elisoff is in his second year of traditional games.

“At first when I joined as a freshman I was doing wrestling as my main sport and I focused on that a lot and basically that was my passion,” Elisoff said. “Then one of my friends told me that I should join NYO because during fitness contests I had a pretty good broad jump and stuff.”

Once wrestling was over he gave it a shot and has stuck with it.

“Now, it kind of opens up some cultural gateways,” he said. “I speak Tlingit and I am learning more about my Clan and where we come from.”

Elisoff took first place in the one-hand reach with 62 inches with no misses at a recent state event in Anchorage.

“When I joined I didn’t expect to pick it up as fast as I did,” Elisoff said. “I kind of expected for it to take more than a few years, but I feel very proud that I have actually accomplished everything that I am accomplishing so far and it just makes me feel good about myself.”

TMHS sophomore Lyric Ashenfelter hopes to become more advanced in all aspects of the traditional games.

“I really love Native Youth Olympics because I have made a lot of friends through it,” Ashenfelter said. “It is really supportive. I’ve made so many friends, and it is just such a positive community. We all build each other up and it is super fun. I have actually learned the purpose of the games here and the cool backstories behind why they exist, and it is quite cool. I want to get better at these events and teach other people these events like little family members or something because it is a lot of fun and I think they would have a good time with it, too.”

Worl said he was aware of the games growing up but didn’t join them until he was a senior in high school. His father, Rodney Worl, holds the world record in the Knuckle Hop.

“I didn’t have a lot of self-confidence. It took several years of encouragement,” he said. “I remember going to my first practice and being really nervous, but I automatically felt like this is where I want to be. I felt like I belonged there. I felt like my cultural identity, which I had not always been very open about, was embraced within NYO.”

Worl embraced the NYO as well.

In the past 13 years, he has been an athlete, coach, official and coordinator. He became a Tlingit language teacher at Floyd Dryden Middle School because the games pushed him to learn more about his cultural identity.

“So it was kind of a doorway for me into learning about my culture and wanting to take those extra steps to really learn my language and so today a lot of what I do is because I joined these games when I was in high school,” he said.

The Southeast NYO program was started roughly four years ago through a Sealaska Heritage culture summer camp. Sealaska Heritage Institute and other sponsors first helped organize a team in Juneau in 2017 at Juneau-Douglas and Thunder Mountain high schools, and in 2018 the city was represented at the NYO Games Alaska for the first time in almost 30 years. The 2019 Traditional Games in Juneau marked the first time southeast Alaska had hosted a statewide Indigenous sports event.

“It started off small. I think a lot of people were just curious and unsure of what is NYO and why should I get involved, but really after that first year it took off. The kids got to go to an event and see what it was like to be on the floor with other athletes and meeting other athletes from around state and feeling that camaraderie where they are there to do their best and not necessarily there to outdo anybody else but do their best and that built a lot of excitement,” Worl said.

The games have since grown in Juneau and across the region with teams now in Hoonah, Craig, Hydaburg, Metlakatla, Ketchikan, Yakutat and Sitka.

This year, Haines and Skagway started some practices at their schools for the first time.

“They weren’t able to make it to our event but they have taken the first step and started training their athletes within their community,” Worl said. “It is just exciting to see the growth of this sport within the region. I think there is a lot of potential for it to continue growing and we are hoping to continuously have this regional event every year. This year is very different; we’re in a pandemic. It was a goal of ours to do something for the youth this year and we knew it would look different but we really wanted to be able to provide something for them to look forward to.”

At the international and college level the games are called Arctic Sports.

The origin of the Traditional Games are from the interior Athabaskan people and the Inupiaq and Inuit people in Greenland, Canada, Alaska and Russia.

The games are based on ancient hunting and survival skills that allowed Indigenous peoples to survive and thrive in the harsh conditions of Alaska and across the Arctic.

“Many of our youth are still active in subsistence lifestyles, hunting, gathering, fishing,” Worl said. “Some of the games like the Inuit Stick Pole represent pulling in a seal from the ice. Well, here in Southeast we don’t go out onto the ice to hunt for seal but we hunt for seals from out boats so we have to pull the seal onto our boat. There are similarities in terms of hunting and how we relate to the games.”

“I think our participants really resonate with these games, especially our Native participants because we understand the lifestyle of subsistence and the importance of working together to be successful, as hunters worked together to be successful you’ll see that integrated in our games. Our athletes are showing sportsmanship, and they’re giving advice and helping the other athletes and it’s really not about competition but just about everyone being there to reach their personal best. I think that is what makes the games really positive,” Worl said.

At NYO it is common to see athletes sharing tips with opponents, coaches helping other teams’ athletes and participants cheering their peers. Winners seldom have egos.

Nome crab fisherman Haley Osborne won Eskimo Stick Pull in multiple years while attending Mt. Edgecumbe and compared the event to hauling crab pots in his home community of Nome, “There is no ego involved when hauling crab pots.”

His teammate, Murphy Charles from Newton, has won the Kneel Jump, an event that reenacts his family hunting seals on the ice, “when my parents and I hunt traditional foods.”

“I think they are all great, they’re all challenging in different ways,” he said. “I would say the Two-Foot High Kick is one of my favorite events because when you have a really good strong kick it just feels great. You kind of get an adrenaline rush.”

Worl said the goal is for NYO to become a mainstream sport and give youth the opportunity for scholarships in college.

In the past two years, the state NYO games have provided two college scholarships per year for NYO athletes.

“We are kind of in an exciting era of Native games where they are in this moment of growth,” Worl said. “And I hope to see down the road more colleges around Alaska that have Arctic Sports or Native Games teams and more colleges offering scholarships for athletes of this sport.”

While the games are closed to the public for COVID safety protocols, they can be seen on Sealaska Heritage Institute’s YouTube site and a special website at traditionalgames.sealaskaheritage.org.

There will be a middle school and a high school division and results will be posted on the site.

“Normally we have an adult division as well but due to COVID we separated the adult, or open (generally unaffiliated with any teams) division into a third event that will be happening in the summer, possibly in Anchorage,” Worl said.

“I think what is really great about these events is they are cross-cultural events. Our participants come from many different cultural backgrounds and not all of them are Native but it is an opportunity for the broader community to learn about native cultures of Alaska and not just the Inupiaq or Inuit cultures.”

“We are beginning to look at including traditional games from Southeast as well so it is very much a cross-cultural event,” he said.