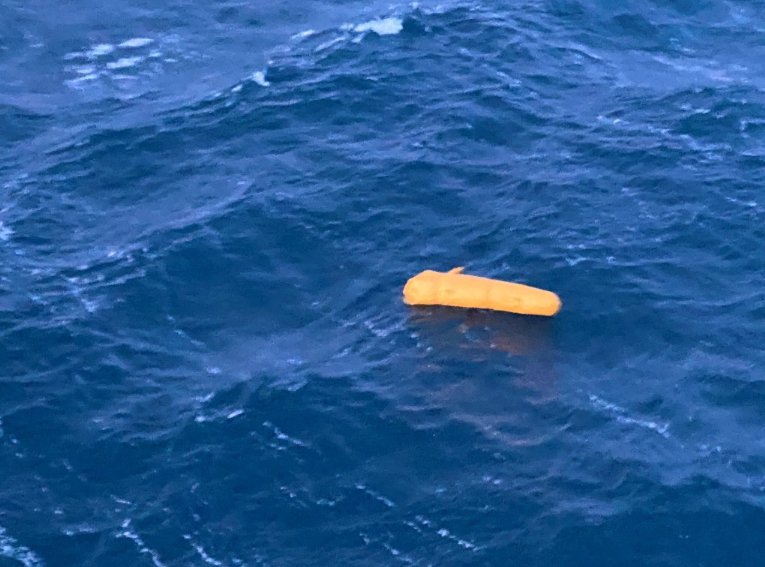 Inflated yellow pop-out float from the helicopter (Photo courtesy of the US Coast Guard.)

Juneau, Alaska (KINY) - In a preliminary report from the National Transportation Safety Board, it has been confirmed that the Helicopter debris recovered near Kodiak is from the Helicopter piloted by Andy Teuber.

According to Teuber's wife, her husband owned Kodiak Helicopters, LLC which owned and operated the helicopter.

She stated that he had requested the use of the helicopter from a company employee to make a day trip to see family located in Kodiak.

A pilot for Kodiak Helicopters reported that on the day of the accident, he was contacted earlier in the day by Teuber, telling him that he needed the helicopter for the next few days, and he told him to cancel any previously scheduled charter flights.

He added that he had brief contact with Teuber while unloading his personal gear from the helicopter, but that Teuber seemed distracted and was not himself.

Just before departure, Teuber commented to the Kodiak Helicopters pilot that he wanted to be in Kodiak, and with his family when a local news story involving him was scheduled to publish.

The US Coast Guard stated that an emergency locator transmitter beacon was not received from the accident helicopter.

Minimal debris believed to be from the helicopter were observed in the water, and the search was suspended on March 3 at about 11:30 pm.

A review of Federal Aviation Administration data indicated that there were no preflight weather briefings or air traffic services provided to Teuber.

Days after the accident, an air charter company based in Kodiak discovered debris on a beach near Afognak Island, Alaska.

The debris recovered was found to be parts of the helicopter’s float, landing skid, and fuselage structure.

Prior to the crash, Teuber resigned his position as Alaska Native Tribal Health Consortium CEO/President, and his seat on the University of Alaska Board of Regents after allegations of Sexual Misconduct.