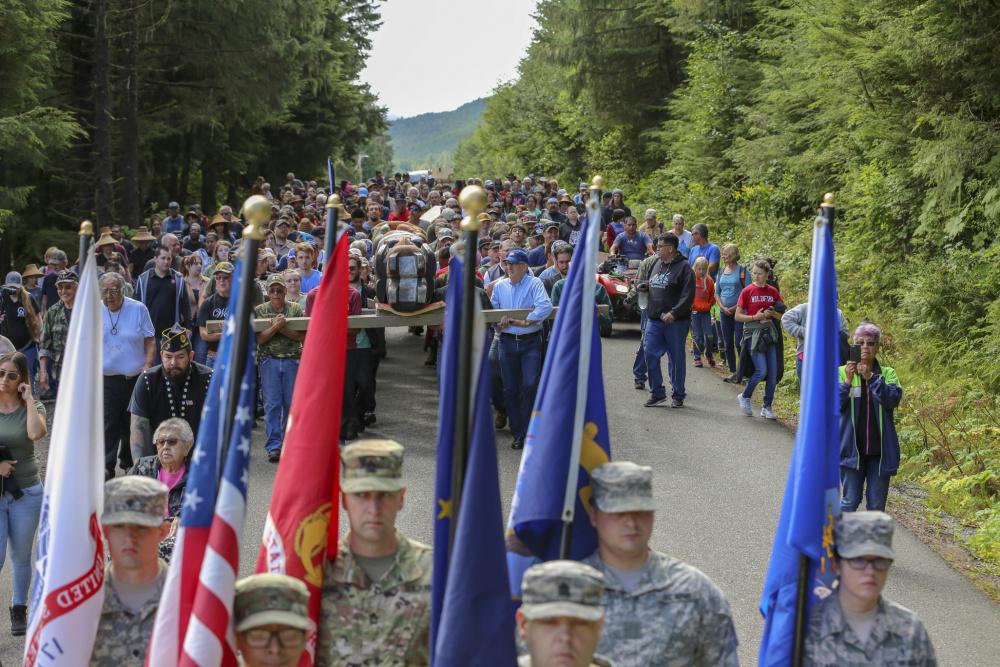 Klawock, Alaska (KINY) The west coast of Prince of Wales Island swelled with veterans, friends and family members who gathered to partake in a three-day celebration culminating with a totem pole raising ceremony here Aug. 18.

Like many of the totem poles that stand reverently on the island symbolizing or commemorating ancestors, cultural beliefs, oral history and clan lineages, this 37-foot totem stands to honor Alaska’s veterans.  “This is how we as Tlingit and Haida people acknowledge an event or person by raising a totem pole in their honor,” said Klawock elder Aaron Isaacs, a former Alaska Army National Guardsman and U.S. Army 82nd Airborne paratrooper, who contemplated and planned for decades about the best way to honor Alaska veterans as monuments were being constructed across the United States. “[This] is what we are doing – honoring all veterans.”

Isaacs, a current member of the Alaska State Defense Force and president of the Prince of Wales Island Veterans Association, worked with a local carver, Jon Rowan, a U.S. Marine Corps veteran, to come up with the totem’s unique design. The totem displays service branches and Prisoners of War-Missing In Action insignias, a 1960s-era U.S. Army Soldier, ancient warrior holding a double-headed dagger and carrying a jade pick, an eagle and raven at the top, and a set of identification tags that veterans can pin unit crests and insignia to in the bottom of the totem pole.  “The eagle and raven are a representation of us watching each other’s back,” explained Rowan, who also pointed out that the totem is meant to symbolize a mortuary pole where remains were historically preserved inside a small wooden box in the totem. “Behind the POW-MIA flag, we have a bent wood box. That is for our missing brothers and sisters – a place of honor.”

In addition to it being a priority for Guardsmen to engage with rural communities, Capt. Walter Hotch-Hill, with 1st Battalion, 297th Infantry Regiment, affirmed that the unit would like to have more of a presence in the community, especially with the Alaska National Guard armory and A Company, 1-297 Infantry’s detachment located in Klawock.

After hundreds of community members, veterans and Guardsmen carried the pole almost a mile, ropes were set up and participants were safely instructed to lift and eventually raise the totem. Veterans shouted “OOH-RAH” in unison as the crowd cheered and celebrated. A local school band played the national anthem, and traditional song and dance were welcomed again as Rowan took his place in front of the totem performing the carvers’ dance.

“I feel like my heart is just ready to explode,” said Isaacs reflecting on everything from coming up with the idea, raising money and even getting a Western Red Cedar donated that would soon stand nestled among the greenery of the Tongass National Forest in front of the shoreline of the Klawock Inlet.

Isaacs and Rowan were joined by Medal of Honor recipient and retired Army Maj. Drew Dix and David McIntyre, Jr., president and chief executive officer of Triwest Healthcare Alliance to place the last piece of the totem, signifying its completion.

Rowan said that the Veterans Totem Pole represents the service and sacrifice of not only every veteran and service member on the island, but across the nation as well.

“Remember the sacrifices that each and every veteran and service member make for our freedom and that it isn’t free,” said Rowan, hoping people will take away the same feeling as they see the pole and think about what it represents. “We don’t demand it; we just hope that they remember that.”