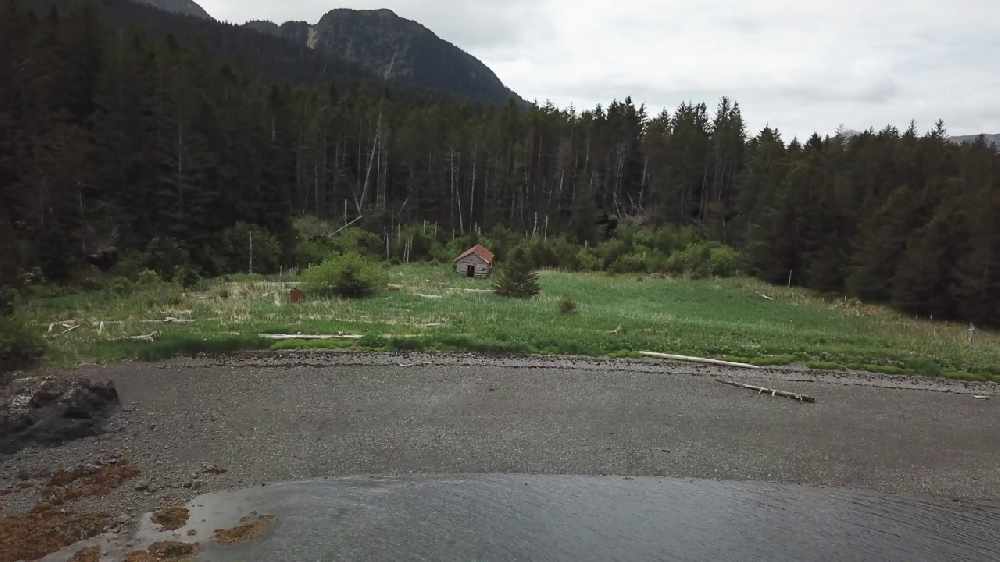 What is left of Portlock. Image courtesy of Extreme Expeditions Northwest LLC via YouTube.

Juneau, AK (KINY) - For Halloween, we decided to reach out to a local historian and adventurer to see if there were any unsolved mysteries in Alaska that would fit the spooky mood of the holiday.

He came back to us with a collection of research on strange happenings in the town of Portlock that is south of Homer. These stories point to a large hairy beast, smaller hairy devils that travel in packs, a wailing spirit that wandered the wilderness, and many deaths that were hard to explain.

Brian Weed is the co-founder of a group called Juneau's Hidden History that primarily keeps track of things through their Facebook page. He has traveled all over Juneau and many other Alaskan towns in search of natural history and stories. His group plans frequent hikes in the area to places that have some sort of story to tell or just to see the natural beauty of the state.

Weed started the story with a peculiar death in the 1930s.

"A logger was out working and something or someone hit him over the head with a huge piece of logging equipment, something that one man couldn't have lifted. When they found his body, there was blood on the equipment and there was no way that one person could have done it. He was a good ten feet from the logging equipment, so it's not like he slipped, fell, and hit his head. It looked more like someone picked it up and bonked him over the head."

There are lots of accounts of creatures being seen in the area.

"The local Natives started talking about a creature, a hairy Big Foot type Yeti monster and it was called the Nantiinaq or big hairy creature as it was called. At that same time, the villagers talked about seeing a spirit of a woman dressed in black clothes that would come out on the cliffs above town. They described her dress as being so long that she would have to drag it. She had a very white face and would scream and moan. The villagers would hear something and then she would disappear back into the cliff face."

In the 1920s, a man by the name of Albert Petka supposedly scared off the hairy creature with his dogs, but not before receiving a fatal blow to the chest. According to the stories, Petka survived to explain what happened, but died to his wounds soon after. There are also reports of prospectors and hunters going missing frequently to the point that it became commonplace. Their bodies were allegedly found in a creek as if their limbs had been ripped apart. A school teacher in the 1970s even talked about growing up in Portlock and also told stories of people being afraid of what could be lurking in the night.

Weed considered himself a skeptic and explained what the Nantiinaq could have been mistaken for.

"Maybe they were seeing an extremely large bear in the area. From a distance of say a hundred feet, your brain has never seen a bear that big, so you put together an idea of what you think you saw. If the bear is standing up say in the 10 to 12-foot range, it may be the biggest bear you've ever seen and so you're brain may not put together that that's a bear. Maybe you're seeing it from a strange angle or it's too close to trees so you can't see its whole shape."

Regardless of his skepticism, there is something uncanny about several groups of people being fearful of this monster.

"It's definitely an interesting story, but people swear by this. For the locals that grew up in the area, this thing has apparently existed for hundreds of years. There was a small village site at Portlock before it was founded and those people had originally moved away."

"When the 1930s incidents started to happen most of the Russian Aleuts actually moved out of town for a year. The people running the cannery basically begged their workers to come back and they set up armed guards for a short period of time, trying to get their workers back in town."

"That we can establish as the facts. Those people did leave the town. We know when the town and post office shut down. We know that there are reported murders in the area. They called them murders, but they also included people that just went lost in those reports."

"We're not talking about a dozen people. We're talking like three dozen people. If we have a serial killer in the area at the time, they took out a lot of people in the course of say 20 years."

Weed told us that he hopes to visit Portlock to do some exploring.

"I'm hoping to camp 3 or 4 days in the area and maybe set up some cameras just for kicks. I'm not trying to do like a Ghost Hunter special or anything, but I would like to see if there are some big brown bears in the area and what might have been seen that would cause people to be spooked."

He then explained how Juneau's Hidden History focuses mostly on things that are inherently true.

"Our group has always been about telling the truth and seeing what we actually see, taking pictures of stuff. Do we believe in ghosts, miners creeping around in tunnels, absolutely not. We've seen a few things that we couldn't explain at the time, but later as we investigated it was, 'Oh these rocks slid because of this ice or the timber decided to finally break because it was all rotten.' Do we think something touched it at the time? No."

The group has many items they have collected over the years, including uncommon maps that they were given to by collectors. Those items were then scanned at a high resolution and shared with the public. Weed has also pitched a television show to the Travel Channel that aired a pilot last April with hopes that they can be picked up in the spring of next year. He says that shows that take place in Alaska often do not show true Alaska and that they hope to change that with their honest depiction of exploring the state.

The full story with Brian Weed can be found ON DEMAND on our website.