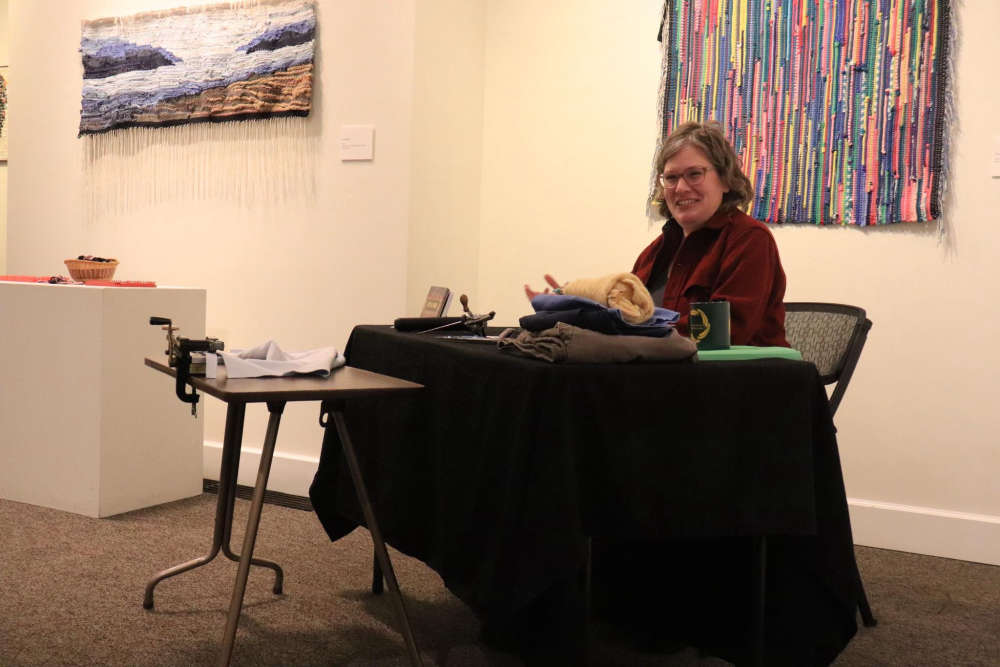 The art exhibit is featured at the Juneau-Douglas City Museum, which is open with free admission Tuesday through Saturday, 10 am to 4 pm.

"The Juneau-Douglas City Museum which is on Main Street and Fourth. The show will be up for the month of December. It will come down just a couple of days before New Year's and the museum is open Tuesday through Saturday. Make sure to check out the rest of the museum."

"It was great, being part of the big First Friday. There were a ton of other things going on around town too, but we had a steady crowd of people coming through. So it's fun to get to chat with folks. A lot of people coming through shared their own memories of this type of weaving and, so that was interesting to talk to other weavers in town and other people who've done this."

McEwen explained why she chose to weave as a form to reduce waste.

"I like a project and I like learning a process. Using the looms is really interesting because there's a lot of moving mechanical parts. I love old technology, I get so frustrated by everything has a chip in it nowadays. When those give out, we're on this track now where we replace things instead of repair them. With that, and with clothes, it's like now clothes are made with the idea they'll be worn for one season and then thrown away. This is something that will always work as long as it's maintained and repaired and oiled. There's no chip in this that's going to fail."

She said what it was like to dive into a new art form.

"I have an art background. So I was comfortable with a lot of kind of the behind-the-scenes stuff with getting set up with an art show and a lot of the textile work. But it was like weaving specifically with something, that was new to me. And I also wanted this to be about the history of this kind of textile weaving. I also got a lot of library books and read and talked to people about the history of this as well." 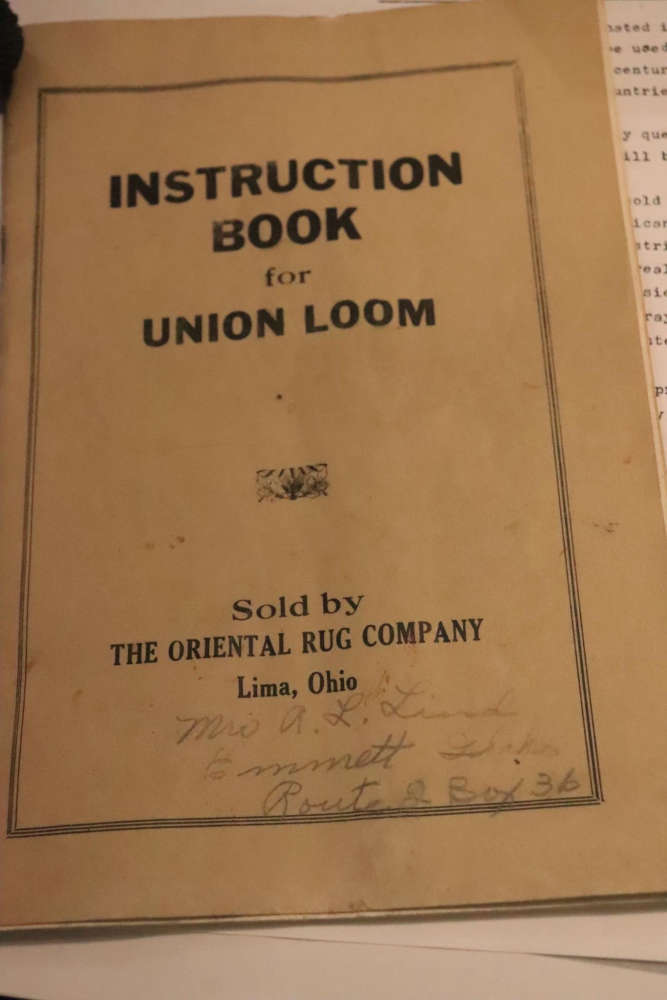 Above: A book that came with McEwen's loom that she read to the audience. The book encourages the reader it's possible to make a self-profiting business from weaving. McEwen also read two other books that called weaving a waste of time, which she found humor in. Below: McEwen said her exhibit is titled Hit & Miss for two reasons-one, the process of weaving together small pieces of fabric are called a Hit & Miss technique, and two, she wasn't sure if her fresh idea would be perceived as a hit or a miss. A traditional "Hit & Miss" rug is shown below, made out of various children's clothing. 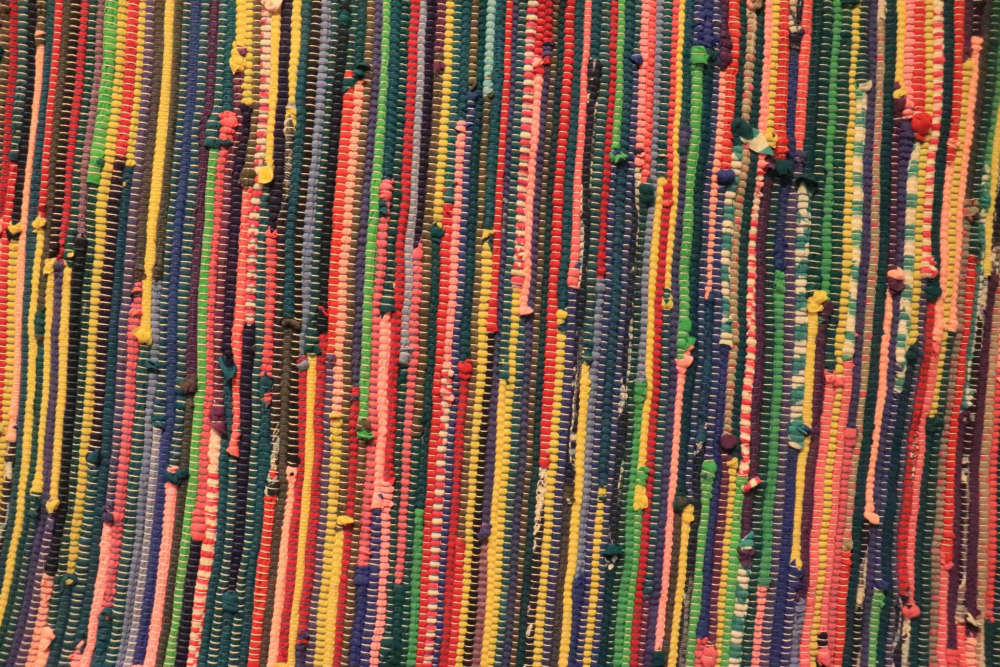 During her artist talk, she shared that she had a very short window of time to master a technique and execute it. It's clear that McEwen's passion for contributing her small part in recycling led her to be a successful, creative weaver.

"I had the idea last summer that I wanted to do something with textile reuse, gathering clothes that weren't workable for the thrift stores here and that would be headed to the dump. Started looking at some different ideas and wanted to pursue weaving. So I applied in November, December. So it's been about a year and then I got the notification that I was accepted. And then so from then, I had to start planning, get some looms, get them set up and learn how to use them and was learning what I was doing. And then I had about another six months to actually make the pieces." 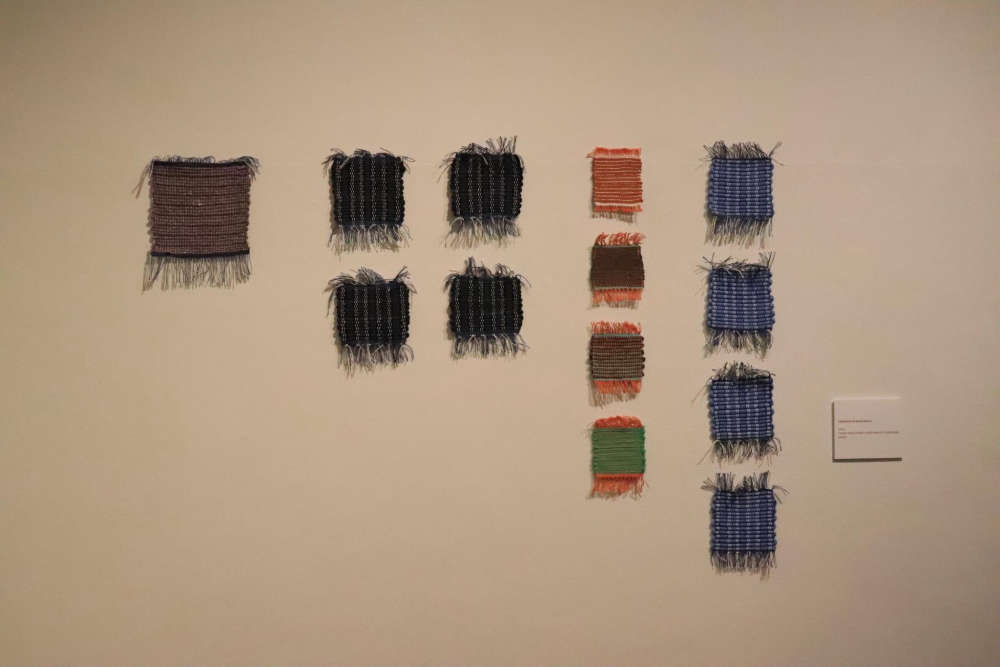 Above: McEwen started off with small pieces as she began her learning process.

Along with teaching herself the art form, McEwen gathered trash bags of old clothes from people in the community that would have otherwise been thrown away. McEwen's exhibit prompts the viewer to consider where something goes when it's thrown out, and what other purposes it could have. 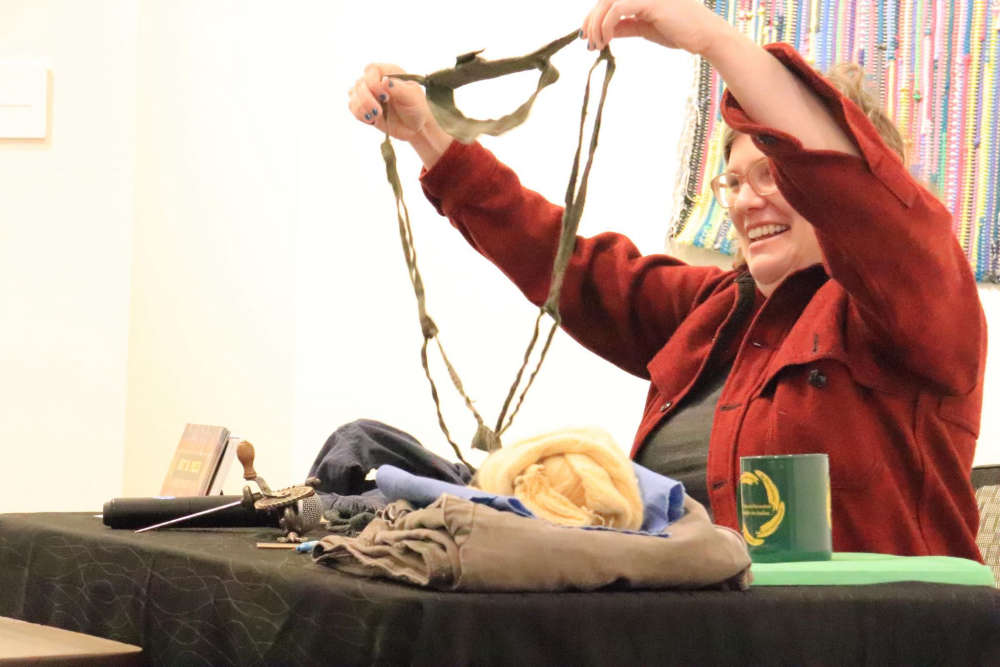 Above: Some of McEwen's techniques include cutting strips from side seams in t-shirts and unraveling threads from sweaters. T-shirts without side seams can be cut as a spiral into a long continuous strip, shown above. Below: At her artist talk Saturday, McEwen demonstrates using the Union 36 Loom from Boonville, N.Y, which was manufactured between 1945 and 1969. 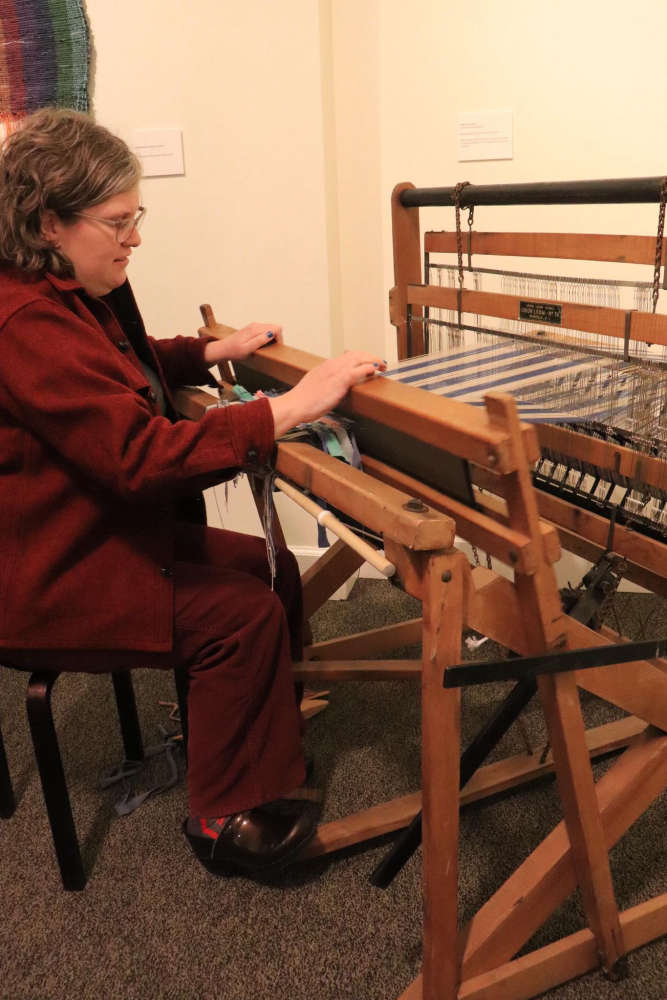