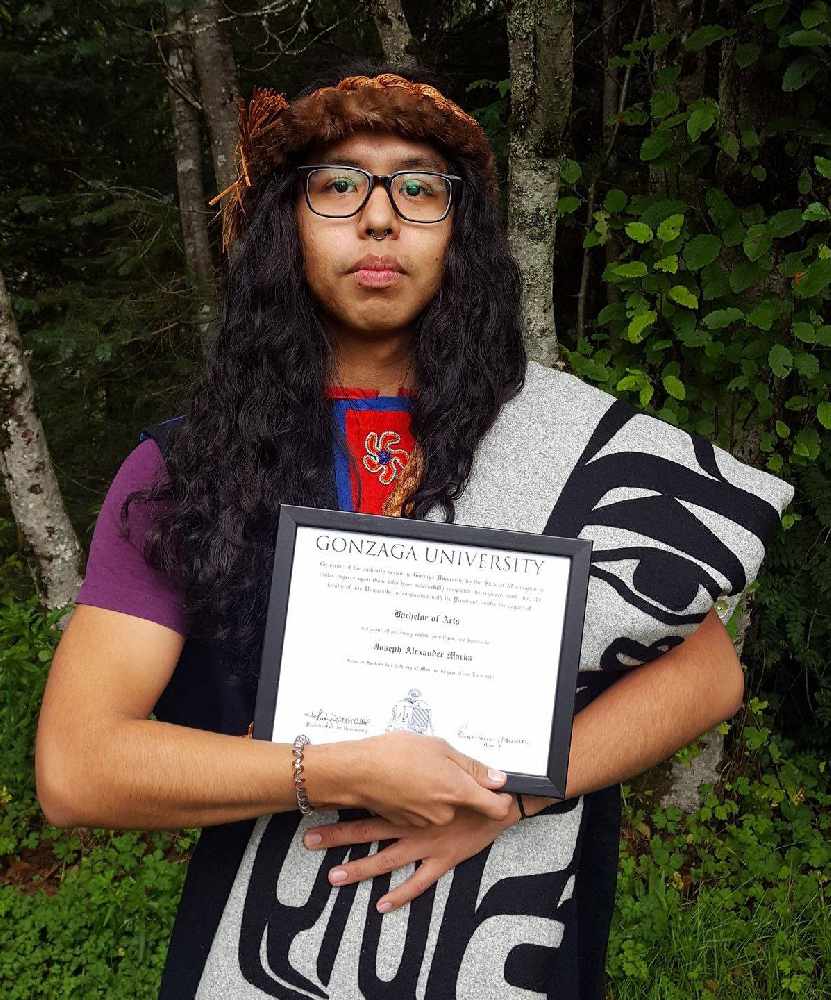 Joseph Marks is from the Kaagwaantaan clan, Gaaw Hít in Klukwan. His Tlingit name is Koodéik'.

Juneau, Alaska (KINY) - A Ph.D. candidate who is pursuing a degree in linguistics with a specialization in revitalization is this year’s recipient of Sealaska Heritage Institute’s Ruth Demmert Language Scholarship.

According to a Sealaska blog post, the $5,000 award, which is financed by the Sealaska Scholarship Fund and given to only one student each year, went to Joseph Marks, who is Tlingit from the Kaagwaantaan clan, Gaaw Hít in Klukwan. His Tlingit name is Koodéik'.

Marks’ background is already impressive given his young age. In his senior year at Mt. Edgecumbe High School in Sitka, he was awarded a scholarship from The Gates Millennium Scholars Program, which funded his entire undergraduate degree at Gonzaga University.

Prior to receiving his bachelor’s of arts for a double major in international relations and French, he was named a Fulbright Scholar and used those funds to teach English in Germany for a year. He earned his master’s degree at the University of Arizona, where he studied Native American languages and linguistics.

“For many years, linguists have come into the Tlingit community, recorded the words of our ancestors and, to me, took our language and caged it up where our Tlingit community could not get to it. The documents that are written on the language are riddled with linguistic jargon, and though those papers have Tlingit words in them, they are missing the Tlingit voice. I want to put it back in,” Marks wrote.

“Joseph is incredibly gifted and a rising star in our language-revitalization community,” said SHI President Rosita Worl. “His pursuit of higher education and passion for perpetuating our Tlingit language were instrumental in our decision to recognize him with this award. We are honored to be a part of his journey.”

The scholarship is named after Ruth Demmert of Kake, a fluent Tlingit speaker, teacher and tireless advocate for the revitalization of the language. She is so highly regarded that the Organized Village of Kake designated her as a cultural treasure.

The fund was named in her honor at the urging of participants at SHI’s 2018 Native language summit, which drew more than 70 fluent Tlingit, Haida and Tsimshian speakers and 200 language learners. Ruth is Raven from the Kaach.ádi clan, and her Tlingit name is Kaanak.

This is the third year SHI has given the language scholarship since the program was founded in 2017. The first two recipients were Tlingit language professor Dr. Xunei Lance Twitchell  and Haida language teacher Ben Young.