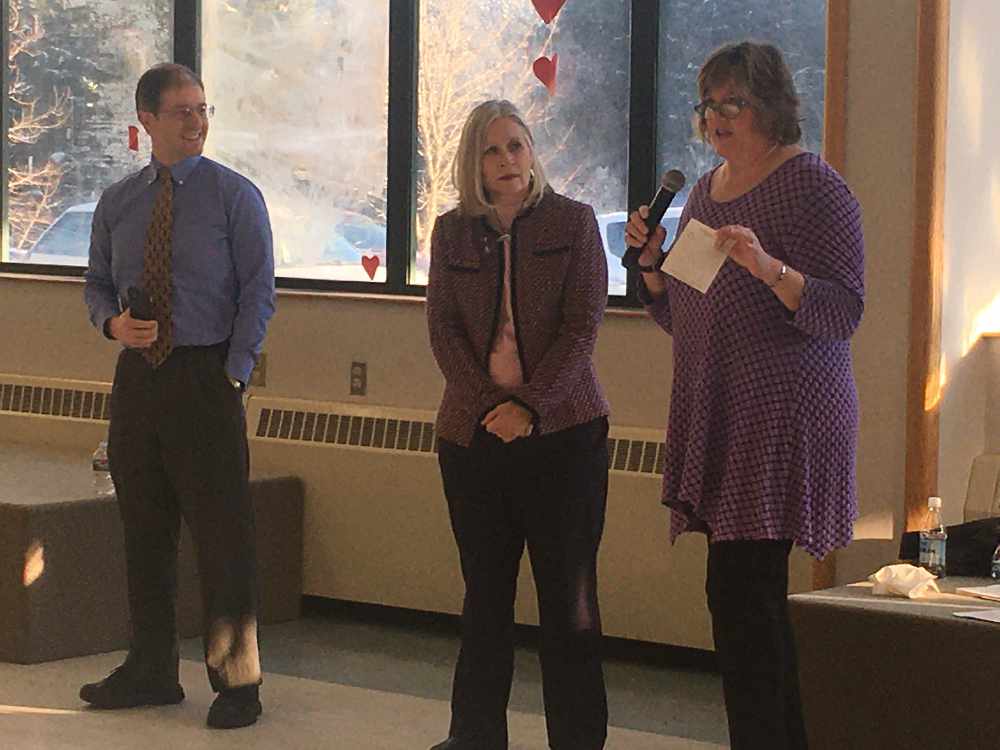 Rep. Sara Hannan said the house approved a budget in a record 43 days last week.  The coronavirus though has brought on economic changes.

Hannan noted Alaska's revenue does not match its expenditures.  She said the legislature is on track to finish within 90 days.

Story said today was Ashley Johnson Barr Day.  The bill was signed by the governor Thursday.  The 10-year-old girl was murdered last year in Kotzebue.

"We are thinking about Ashley's family and friends today."

Sen. Jesse Kiehl said the downturn in the stock market and the crash in oil prices are occurring at the same time.  "They both impact our state budget.  This year's budget was based on last year's budget.  He (Governor Mike Dunleavy) did not introduce incredibly deep cuts.  This budget is short on providing the services the citizens of Alaska need."

Cuts include $30 million in education funding and further cuts to the university system.

"Those cuts are a real problem.  The legislature is trying to cure some of the damage.  We are working on reinstating the $30 million for education and some of the university funding."

Kiehl said there have been some budget additions to the marine highway system that he described as the bare minimum needed to operate.

"We can't go through another winter like we just had."

Another priority for Kiehl is support for Gavel to Gavel Alaska.

Story said ferry funding, various proposals for the PFD, and an alcohol bill are also priorities for the legislature this year.

About 50 residents were on hand for the town hall at DZ Middle School.

Comments from the public included more ferry funding and small business disaster loans from congress for the tourism business.

Local tourism has seen a number of cancellations due to the COVID-19 scare already, including impacts to four cruise ship visits.

"This pandemic is really going to hit home.  If you are a small, independent business, you don't have a bank behind you," Hannan said.

She said restaurants in Seattle are hurting from the coronavirus.  She noted many may be forced to close.

Sen. Kiehl said the disaster declaration signed by the Governor provides some loans and financial assistance for small businesses.

One case of the virus was reported Thursday in Anchorage.  The patient, an international traveler, has self quarantined.  Officials do not expect it to spread in this case.

Sen. Kiehl said he voted in favor of the bill to raise highway fuel taxes from 8 to 16 cents per gallon.  He also wants at least flat funding in education this year.  He also has an open mind about additional oil taxes.

Rep. Story said the House and Senate have worked well together this year.  Some of her priorities are the protection of the permanent fund and increasing the base student allocation for education.  She said the state budget has been cut by 43 percent in recent years.

She called the cuts to the ferry system an economic disaster.  "Our priorities have to be public health, public safety, public education and protecting the permanent fund."

Hannan said she advocates for an income tax, an increase in certain nicotine taxes and a change in the oil tax structure.   She noted even if the state doubled its revenues from natural resources like mining, it would only account for six percent of the state budget.  This excludes oil and gas.

Sarah Hargrave with the Public Health Department called the coronavirus an epidemic.  She said the good news is Juneau can do something to help contain it.

Personal hygiene, washing your hands, and social distancing remain the top tips from health officials.  Disinfecting high touch surfaces and covering your mouth and nose when sneezing or coughing is also important.

She said the public health department is offering a free flu shot.  She urges people to stay home if they are sick and to call ahead to your doctor or emergency room if you have symptoms like cough and fever.  She also urged elderly patients to contact their doctor to see if a pneumonia shot is a good idea for them.

Hargrave said she expects to see public meetings and events canceled in Alaska as the virus spreads.  She said they are considering drive-thru testing.  Other communities have started this practice across the nation.

CBJ Emergency Operations Manager Tom Mattice said Juneau will be the hub for services if there are cases in any of the smaller communities.

He talked about the shortage of bleach wipes and hand sanitizer.  He said he has an inventory of supplies and resources needed during disasters.