Lawmakers approve PFD payments to residents of about $3,200 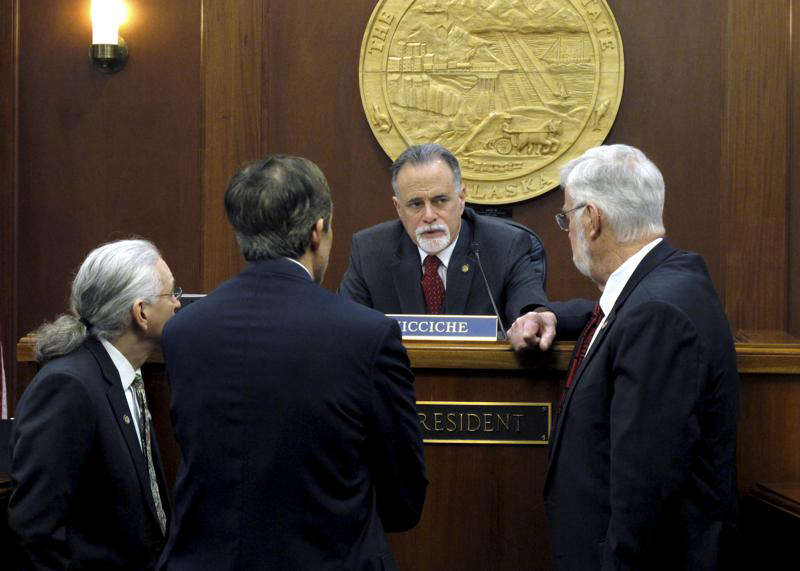 Alaska Senate President Peter Micciche, second from right, speaks to, from left, Sens. Tom Begich, Bill Wielechowski and Gary Stevens before the start of a Senate floor session on Wednesday, May 18, 2022.

Juneau, Alaska (AP) - The Alaska Legislature approved a state spending package late Wednesday that would pay residents about $3,200 this year after a vote that would have boosted the payout to about $3,850 narrowly failed in the House.

A tentative budget agreement reached by House and Senate negotiators Tuesday called for a dividend from the earnings of the state’s oil-wealth fund of about $2,500 this year, plus a $1,300 “energy relief” check. But the proposal called for half the funding for the energy checks to come from a budget reserve account that requires three-fourths support in both the House and Senate for it to be tapped.

Estimates indicated payments would be around $3,200 if the three-quarter vote failed in either or both chambers, or around $3,850 if both chambers had the necessary votes.

The Senate approved the budget 19-1 and reached the required threshold to access the reserve account with a 15-5 vote. The House didn’t take up the budget until hours later, and Gov. Mike Dunleavy in the meantime issued a statement urging representatives to provide the votes necessary for the higher payout.

The House passed the budget 33-7, and support from at least 30 representatives was needed in a subsequent vote to access the reserve account. With 29 votes in favor and 10 against, Rep. Grier Hopkins, a Fairbanks Democrat, voted no for the final tally, 29-11.

He said he thinks the amount approved will help Alaskans.

House Minority Leader Cathy Tilton, a Wasilla Republican, said she felt “sorry for Alaskans tonight.” She said members of her caucus wanted to try to get as much money as possible to Alaskans.

Supporters of a higher payout argue the state is benefitting from high oil prices and can afford to help Alaskans faced with high fuel, food and other costs.

Wednesday marked a constitutional meeting limit of 121 days for the regular session. The House and Senate adjourned shortly after midnight.

Lawmakers had taken a midday break for a group photo outside the Capitol, and the House imposed a limit on debate early Wednesday afternoon after representatives had made little progress at that point in getting through the bills on their calendar.

There was a flurry of activity, with bills aimed at strengthening sexual assault laws and raising to 16 the minimum age one can marry in Alaska among those that passed. Some bills that were on the move had been stuffed with parts of other bills that were stuck in committee.

The House rejected the Senate package, leading to the appointment of the conference committee that was tasked with reaching a compromise. Rep. Kelly Merrick, an Eagle River Republican who was one of the budget negotiators, said the package makes investments in areas such as public safety, education and infrastructure.

Sen. Bill Wielechowski, an Anchorage Democrat, supported the higher dividend in the Senate version of the budget but said Wednesday that the compromise amount would come close to that amount.

Sen. Mike Shower, a Wasilla Republican who also had supported a dividend of around $4,200, said he couldn’t vote against the package when people could use the help.

Sen. Lora Reinbold, an Eagle River Republican, voted against the package, saying she has a hard time with “arbitrary amounts” being used for a dividend and that “meaningful” budget cuts were missing.

Most Alaskans get a dividend. There is a yearly application and residency requirements to qualify. Dividends traditionally have been paid using permanent fund earnings, which lawmakers also have come to rely on to help pay for government.