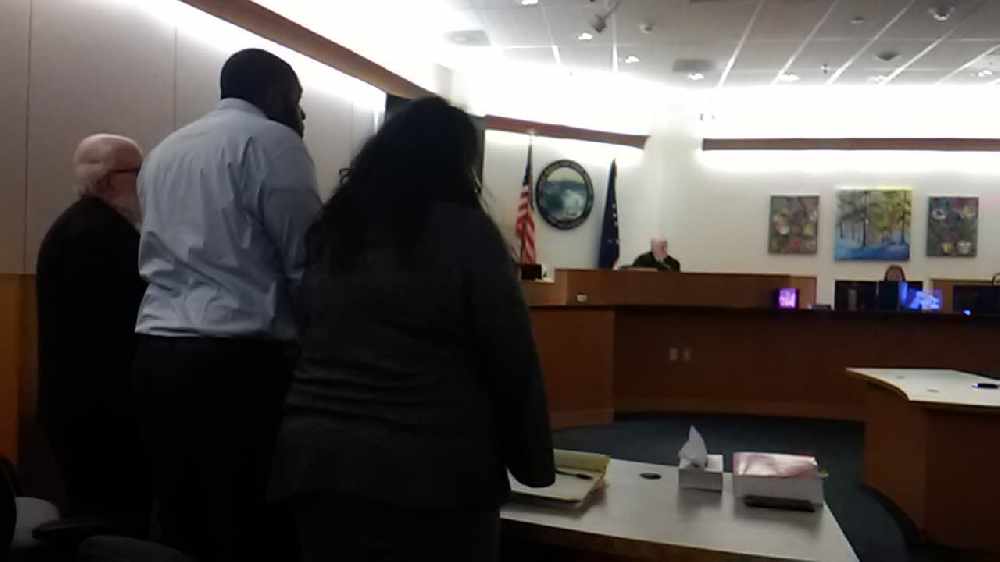 Laron Graham stands to face his verdict at Dimond Courthouse on Oct 8.

Graham was accused of shooting to death Robert Meieres and Elizabeth Tonsmeire at a Douglas Island apartment in November 2015.

In closing arguments, prosecutor John Darnall presented evidence of admissions by Graham on three separate occasions, cell phone records, and other issues brought up during trial.

"There were three people in that apartment, and only one left," Darnall told jurors.

Defense attorney Natasha Norris told jurors that witness James LeBlanc-Tweedy created a narrative of Graham's confession in order to secure a deal in a pending criminal matter Tweedy was involved with. She also told the jury that the state provided no evidence that Graham was actually at the residence during the times of the murders.

Norris also told jurors no established time of death has been established -- and that the state's entire case hinges on the testimony of Tweedy.

"The only just verdicts in this case is 'not guilty' and 'not guilty,'" Norris told jurors. "[Their case] is fictional ... it's something the state created."

No murder weapon was ever introduced as evidence in the case. Graham also declined to testify in his own defense.

The 12-member jury was composed of nine women and three men.

According to Norris, Graham will finish serving a sentence in a separate case before he is released. That case, from 2016, involved charges of vehicular theft, assault, robbery and violation of a domestic violence order.