Kuhn appointed as U.S. Attorney for the District of Alaska 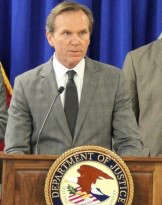 Kuhn announcing the results of a health care fraud sweep in the Western District of Kentucky on July 13th, 2017. (Photo Credit: DOJ.)

Juneau, Alaska (KINY) - Attorney General Merrick Garland appointed John Kuhn as U.S. Attorney for the District of Alaska, replacing Bryan Wilson who has been serving as acting attorney since March.

Kuhn most recently served with the Executive Office for United States Attorneys since 2018 in various roles, including National Heroin and Opioid Coordinator, National Controlled Substances Coordinator, and Acting Assistant Director in the Office of Legal Programs.

Before joining the Executive Office, Kuhn served as United States Attorney for the Western District of Kentucky for nearly three years, from December 2014 to September 2017. Before he became U.S. Attorney, Kuhn served for more than four years as First Assistant U.S. Attorney, supervising the Criminal, Civil, Appellate, and Administrative Divisions of the Office.

Kuhn replaces former Acting U.S. Attorney Bryan Wilson, who served in that role since March 1, 2021. Wilson is returning to his role as the First Assistant U.S. Attorney where he has served since November 2017.