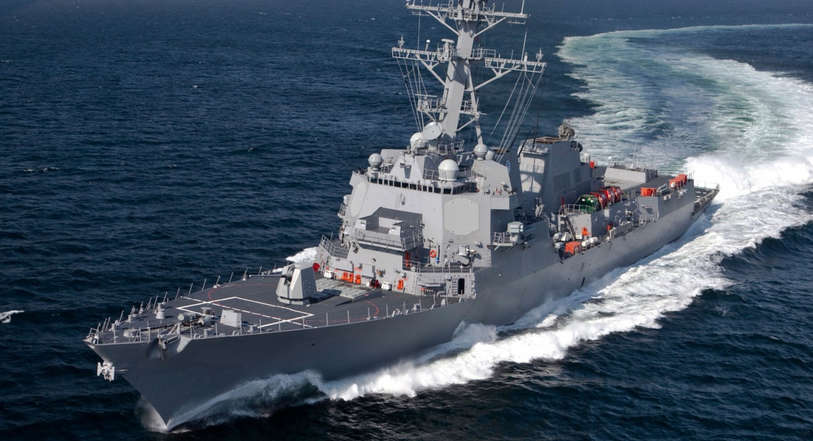 The ship’s name honors former U.S. Senator Ted Stevens, who served as a pilot in World War II and later as a senator representing Alaska. At the time he left office in 2009, he was the longest serving Republican U.S. senator in history.

“With this ship we honor Senator Stevens’ exemplary service to our nation,” said Kari Wilkinson, president of the Ingalls Shipbuilding division. She was joined at the ceremony by the senator’s wife of 29 years, Catherine Stevens; his eldest daughter, Sue Stevens Covich; and by his granddaughter, Laura Sexton, who represented his youngest daughter, Lily Stevens-Becker, who could not attend. “Each one of these women has a unique connection to our ship’s namesake,” Wilkinson said, “and we are grateful that each of them accepted the important responsibility of sponsor. Ingalls shipbuilders welcome them as part of our extended family and we will work steadfastly together to build the legacy of this public servant.”

In a family letter read during the ceremony the sponsors said Senator Stevens would resist any fanfare focused on him. “Most important,” the letter read, “is to acknowledge the men and women who will serve on USS Ted Stevens, as well as every person who is building this ship. Dad spent many years ensuring that the service has the advanced technology needed to keep our country and service members safe. This ship will carry on that legacy.”

Closing out the tradition of a keel authentication ceremony the ship’s sponsors joined Ingalls welder Henry Johnson to weld their initials onto a steel plate, signifying the keel of DDG 128 as being “truly and fairly laid.” The plate will remain affixed to the ship throughout its lifetime.

Arleigh Burke -class destroyers are highly capable, multi-mission ships and can conduct a variety of operations, from peacetime presence and crisis management to sea control and power projection, all in support of the U.S. military strategy. Guided-missile destroyers are capable of simultaneously fighting air, surface and subsurface battles. The ship contains a myriad of offensive and defensive weapons designed to support maritime defense needs well into the 21st century.