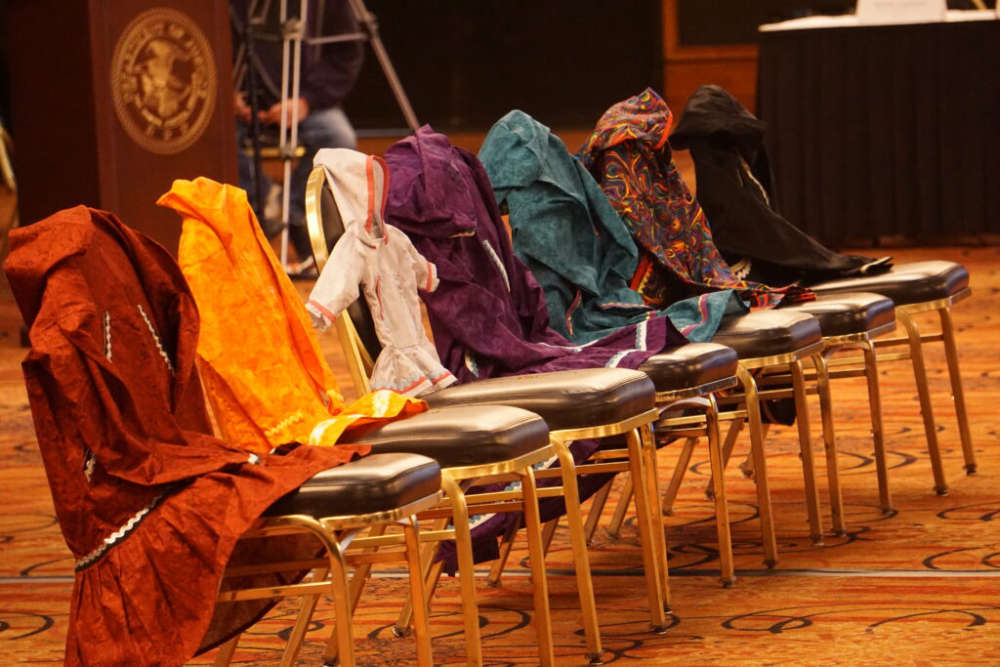 (Alaska Beacon) - The U.S. Department of Justice announced it will provide more than $246 million in grants to Native American and Alaska Native communities for improvements in law enforcement and justice.

The well-received announcement was made in Anchorage on Wednesday at the start of the federal government’s annual tribal consultation conference on violence against women.

Allison Randall, acting director for Justice’s Office on Violence Against Women, made the announcement at the 17th annual consultation gathering.

“There’s never enough funding, but we want to do whatever we can to get funds to the tribes,” Randall said.

Tribal officials expressed gratitude for the infusion of money, but many had a request: Make sure that it does not get intercepted at the state level.

“I want to see it go directly to the tribes. I don’t want it to go to the state,” said Joel Jackson, council president of the Organized Village of Kake, a Tlingit government in Southeast Alaska.

The state has a poor record on law enforcement and public safety in Alaska villages, Jackson said. He cited a $10 million allocation announced in 2019 by William Barr, U.S. Attorney General at the time, that was supposed to help villages. It never helped Kake, Jackson said. “Where did that money go? I’ve asked time and time again,” he said.

The federal government announced in 2019 that some of the money would go to both the state government and 20 tribal organizations, but the list did not include Kake.

Jackson recounted a shocking murder of a 13-year-old Kake girl in 2013, when it took 16 hours for state troopers to arrive in the village. “To me, I still feel like it was yesterday,” he said. “That young girl laid in a back entrance of a church right across the street from our house for 16 hours.”

Lenora Hootch, tribal leader of the Native Village of Emmonak, a Yup’ik government on the Lower Yukon River, also said it is a mistake to rely on the state for public safety. “The State of Alaska has failed in its responsibility to provide adequate and timely law enforcement and judicial services to Alaska Natives in rural Alaska, including the villages in our region of the state,” Hootch said in her testimony. For rural Natives, she said of the state’s centralized law enforcement system: “It doesn’t work, and it never has.”

She said isolated Emmonak is fortunate to have two village police officers and a state trooper, but the trooper is responsible for other villages in the region as well. And the service is limited.

“After 5 p.m., the answering machine is on, and it is directed to the Fairbanks dispatcher,” located 530 miles to the northeast. “Five hundred miles away, the dispatcher asks, ‘What’s going on?’ And the caller responds, ‘We need help right now. Family violence. Children involved.’ Then we wait to learn if anyone will come. Too many times, no one comes.”

Lower 48 tribal leaders were critical of state governments as well.

Jauna Majel-Dixon, a member of the Pauma-Yuima Band of Luiseño Indians who chairs the Tribal Actions Leadership Council that advised the Attorney General, said state government interference is a chronic problem for tribes.

“States like to jump ahead of everybody,” Majel-Dixon said in her opening remarks at the conference.

Majel-Dixon and others had other recommendations, including an end to the competitive process that pits tribes against each other for grants.

Shifting to sustainable support would provide funding “that we don’t have to compete for, that we know is going to be there every year,” Norma Contreras, chair of the La Jolla Band of Luiseño Indians, said in her testimony.

The conference, with representatives invited from all 574 U.S. government-recognized tribes, is a requirement under the Violence Against Women Act. The act was initially passed in 1994 and sponsored by then-Sen. Joe Biden. Over time, the act, which is reauthorized every five years, has added provisions for tribal law enforcement and justice. The most recent update, signed by President Biden in March, removed what was known as a “substantial ties” requirement for tribes to have legal jurisdiction over non-Natives by tribal authorities. Those ties included family relationships and residence on tribal lands; now the law extends tribal jurisdiction without such restrictions.

Viewpoints and recommendations from the Native American and Alaska Native tribes will be used by the Justice Department as it crafts its policies, said Sherriann Moore, the Office on Violence Against Women’s deputy director for tribal affairs.

“We truly want to hear from you what is going to work best in your communities,” Moore said in the conference’s opening session. “We’re not here to tell you what we think is going to work.”