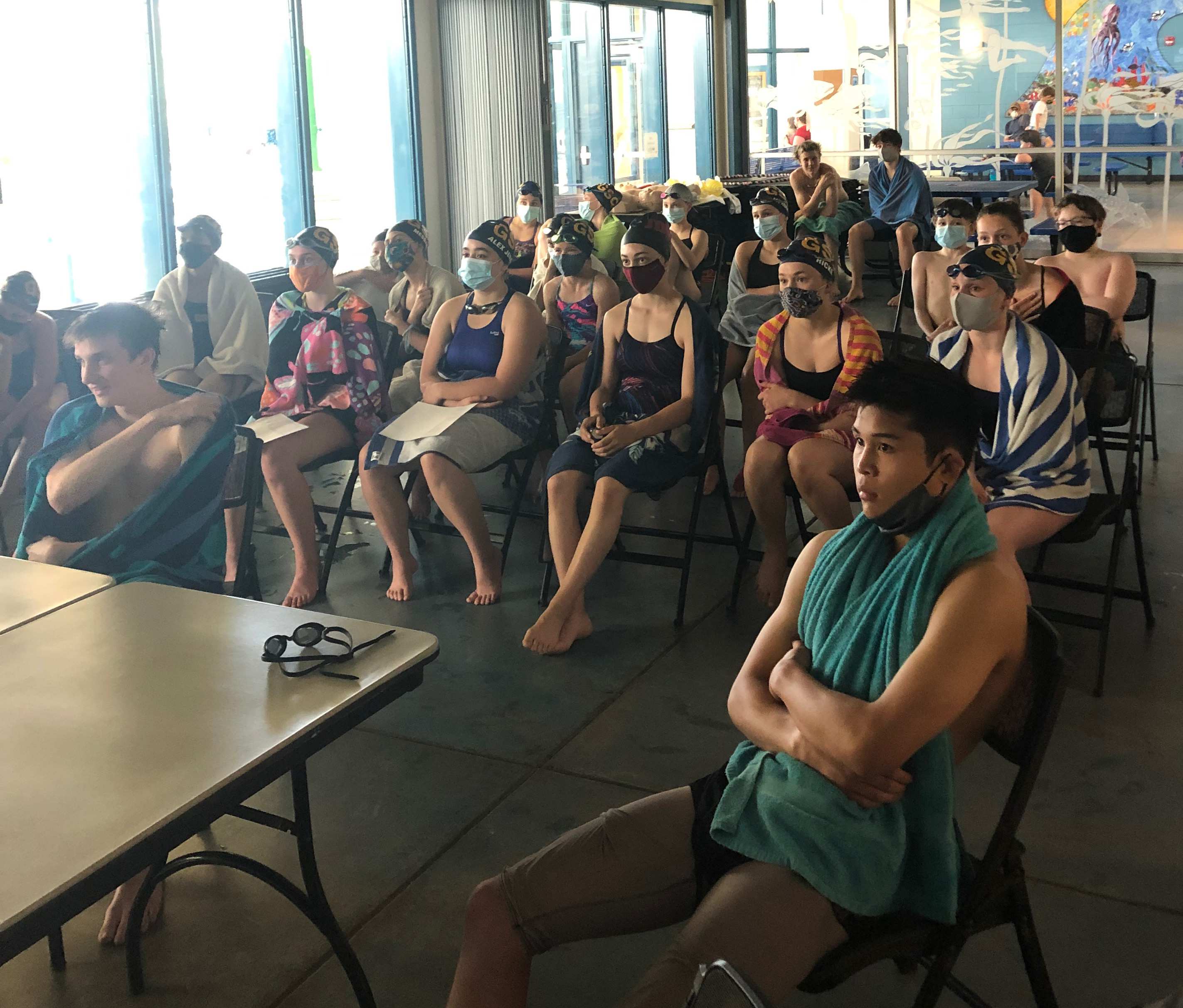 Juneau, Alaska (KINY) - When Lydia Jacoby, the 17-year-old Seward Tsunami Swim Club sensation, touched the wall at Tuesday’s U.S. Olympic Trials in Omaha, Nebraska, in the finals of the 100-meter breaststroke and the her lane clock stopped at one minute 05.28 seconds, a crowd of Juneau’s Glacier Swim Club athletes, clad in swim gear at practice, erupted in cheer.

“I failed to get a photo of the cheering during the race because I was cheering myself just as much as them,” Glacier Swim Club coach Scott Griffith said. “And they were all going crazy.”

Jacoby’s second place finish earned her a berth in the Summer Olympic Games and was just behind event world record-holder Lilly King, who won in 1:04.79.

Many of the GSC have interacted and swam with Jacoby in meets.

“We are all very excited about Lydia’s accomplishment,” Griffith said. “The whole state of Alaska swimming is cheering for her.”

Swimming out of medal contention in the first half of the race, Jacoby stunned the crowd with an incredible push and touched the wall .32 of a second faster than third-place Annie Lazor (1:05.60).

Jacoby swam the fastest final 50 meters to pass everyone but King.

Jacoby was also .43 of a second faster than she was in Monday’s semifinals, when she broke the national age group record with a time of 1:05.71 to earn a berth in the finals on Tuesday. She had also posted the fastest time in the final half to come from behind for the semifinal win.

At that point, Jacob’s semifinal time was the world’s fourth-fastest of the season. It propelled Jacoby into the finals, where she faced King and Lazor, who entered the Tuesday race with the No. 1 and No. 2 times in the world, respectively.

Now Jacoby owns the season’s second-fastest time, trailing only King’s 1:04.72 from Monday’s semifinals. King set the world record of 1:04.13 at the 2017 World Championships.

“I have coached Lydia at many meets, as Seward has not always been able to provide a coach at travel meets,” Griffith commented. “Plus I coached her on two Alaska All-Star teams. There is no one in Juneau or the state that is anywhere near her time. She is now the fastest 17-18 year-old girl ever in the U.S.A. So amazing, I can’t put it into words.”

For comparison, Griffith noted some of the GSC records.

“There is no one really close,” Griffith said. “The fastest GSC female swimmer in 100 meter breaststroke was Mia Ruffin. She broke the Alaska State Record in 2017 with a 1:15.47.  Lydia is a full 10 seconds faster than that, which is a lot in swimming.”

The fastest male 100 meter breaststroker from GSC is Bergan Davis who still holds the boys 15-16 year-old state record in 1:06.54.

“Once again, not as fast a Lydia,” Griffith said. “It is hard to put it into terms how fast that is.”

Griffith said the Jacoby is not necessarily as fast in her other strokes.

Seward has a small swim team and in sometimes would not send a coach along with Jacoby to a national or sectional meet south. Griffith has often been asked, and had the pleasure, to look out for her at a half-dozen meets, including a zone meet when Jacoby was 12.

“She’s a great kid,” Griffith said. “She is very soft-spoken and polite. You wouldn’t think she is a very fierce competitor just meeting her and talking to her. But when she dives in that pool she is there to beat who ever is next to here.”

What makes Jacoby’s times even more incredible is what Seward doesn’t have.

“The people she are swimming against, they swim year around, 20-plus hours a week, their whole lives,” Griffith said. “She comes from a place that doesn’t even have a pool in the summer. Until last summer, I think she didn’t even swim in the summers. She would take three months off every year. The potential when she gets to college is amazing. It is not just how good she is doing now but the potential for what she can do.”

Griffith was asked what makes a good swimmer become better.

“I think it comes from within,” he said. “Talent is definitely part of it. But the really good swimmers, I mean everybody likes to win, I feel like the really great swimmers hate to lose.

Jacoby’s time at the USOT was the fifth fastest ever by an American. Only Lilly King on that list is still active.

Jacoby’s time is the eighth fastest ever swum by any female anywhere, at any time.

There are only two swimmers on that list who are still active, Olympic teammate King and Russia’s Yuilia Efimova, 29.

Efimova will also swim the 100-meter breaststroke in Tokyo in what she says is her last Olympics. Efimova has raced both the 100m and 200m breast at every Olympics and world championships since 2008 and earned a medal in nine of the 10 races dating back to the 2013 worlds.

“What all this does not include is the fact that Lydia literally improves every time she swims,” Griffith said. “Top level swimmers rarely get best times, maybe one to two times per year if they are lucky. Lilly King has not had a best time in four years. Lydia has gone from a 1:09.62 from 22 months ago to 1:07 seven months ago, to 1:06 in April, and now a low 1:05. There is no reason to doubt that she has the ability to go faster at the Olympics.”

Jacoby will be going head-to-head with King and Efimova at the Tokyo Olympics in the 100-meters.

King’s primary event is the 100m breast. She is the reigning Olympic and world champion and world-record holder. Efimova, after silver in Rio, took bronze and silver in the 100m breast behind King at worlds in 2017 and 2019.

They have reconciled after Efimova was banned 16 months (between 2013-15) after testing positive for a steroid and King said at the Rio Olympics, “You’ve been caught for drug cheating, I’m just not a fan,” and then defeated her in the 100m breast.

Jacoby raced in the 200-meter breaststroke today but did not qualify for the top 16 semifinals even though she had the event’s 15th-fastest qualifying time (2:27.39).

Efimova, the two-time reigning world champion and second-fastest woman in history in the 200m breast also failed to qualify at Russia’s Olympic Trials.

Jacoby is the second Alaskan to qualify for the Summer Olympics. Alev Kelter of Eagle River is on track for her second Olympics as a member of the women’s rugby 7s team.

Petersburg High School graduate (1999) Derek Gibb, who earned a college championship at Auburn University, had been the only Alaskan to make it past the preliminaries at the U.S. summer olympic trials and into the 16-swimmer semifinals. Gibb placed 15th in the 50-meter freestyle at the 2004 Olympic Trials.

Jacoby, who will be a senior at Seward High School in the fall, told Swimming World Magazine after her race, “I can’t tell you how much it means to me. I’m so excited. It means so much to me to be able to represent my state at a meet like this. And I’m so excited to now represent my country as well. It’s amazing.”

After a yearlong postponement due to the coronavirus pandemic, the Tokyo Olympic games are set to start July 23.

Though the Olympics will be taking place in 2021 due to the postponement, they are still officially branded as the 2020 Tokyo Olympics.